I just finished my Advanced Individual Training (AIT) at Aberdeen Proving Ground in Maryland where I learned how to be a 44 Bravo, the Army MOS for a Welder. Operation Desert Storm has started with the bombing of Baghdad before I got home, but the coalition ground forces have not yet entered Iraq. (Update: I got home two weeks before the ground invasion to free Kuwait from the Iraqis.)

This first thing we wanted to learn at AIT was the Weekend Pass System:

The pass system was mostly based on PT scores. I spent most of AIT with a B Pass. It took me a few weeks to get my push-up numbers high enough for it, but I was never able to get an A Pass because my 2-mile run times never got low enough. I spent one week with a crappy No Pass because of a bad cramp during a sit-ups test and that was normally my easiest event. 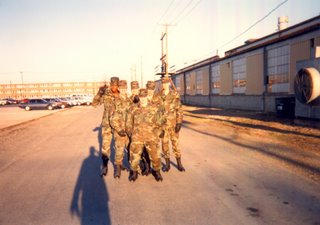 If I thought that the food at Basic Training was better than I expected, the Mess Hall at AIT was even better. They had really great food. A favorite item of mine was getting two eggs over easy and making myself a breakfast sandwich with bacon, cheese and toast.

Private Riggs was the only other soldier from my Basic Training Company to take the same AIT Training as me.

We had a nice Rec Room in our barracks. We had two Pool Tables and a big screen TV. After the isolation we experienced in Basic Training it was nice find out what was going on in the world. We all eagerly watched any updates on Operation Desert Shield.

We had a lot of inspections in Basic Training, but the number increased greatly in AIT. Every inch of our room, locker and uniforms had to be perfect order according to our soldier's manual. After a few inspections, I got the hang of it and they got easier as I kept about 25% of my things unused and ready to go in display condition. We also had to keep our camouflaged BDUs (Battle Dress Uniform) that we wore from getting too wrinkled. We had to frequently dry-clean them and they were starched so heavily that they could practically stand on their own. 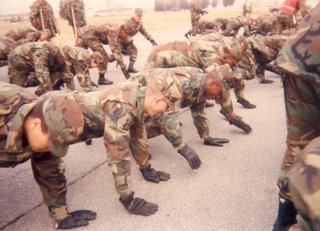 One of the worst things about AIT was Physical Training (PT) at 5am every morning before school. Since it was the winter, it was freezing outside. At least we got knit caps and gloves to protect us a little bit from the wind cutting through our thin sweats. We would alternate between Strength and Agility days.

Besides the regular Fire Guard duty we had take turns doing one night of guard duty for a gate out in the field. The weather was so freezing the night my squad had the guard duty that we had to limit the shifts to only 15 minute at a time. Every minute seemed like a lifetime as we counted every second before we could go back into the tent with the heater.

Another of the duties we had to perform at AIT was Flag Duty. It was a week-long task for five people that was rotated through the company. We would raise the flag at the Battalion Headquarters for 6:30am Reveille and lower the flag at sunset. Three of us would handle the flag while the other two would stop traffic in the nearby street.

We had to take a lot of Drug Tests in AIT. It seemed like every other week we were woken early to line up in the hallway and wait for our turn to piss in a cup. Sometimes the wait was unbearable if you were at the back of the line. Lots of guys hopping from one foot to the other. 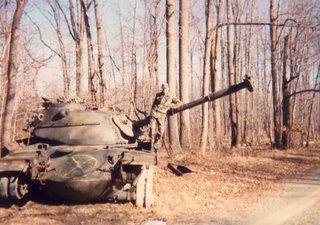 Growing up in California my experience with snow was very limited. Spending the winter in Maryland I had plenty of opportunities to shovel snow. It wouldn't be that bad if the snow didn't stick to the shovel so much. Actually, I enjoyed the snow for the occasional snowball fight and the temperature actually warmed up while it was snowing. It seemed a lot colder when we had clear skies with lots of wind and ice on the ground.

One of my pet peeves during AIT was all the smoking & tobacco chewing. Smoking was banned in Basic Training, and I think all the nicotine addicts are trying to make up for lost time. Nothing is grosser than half-filled spit cups.

My other little day trip besides Washington DC, was to the city of Baltimore. We walked around the city a little bit and visited the Baltimore Aquarium out on a pier in the Harbor. It was a pretty big building with a tropical rainforest greenhouse on the roof. I liked how the escalators crisscrossed high up over the large sting-ray and shark pool as we checked out the fish on each of the five levels. We also watched the dolphin show.

For the last month of AIT, I graduated to a two-man room. It was great after the eight-man rooms in Basic Training and the four-man rooms at the beginning of AIT. 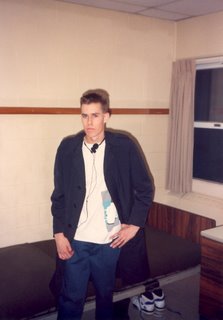 Our two-week Christmas Vacation home was cancelled because of Operation Desert Shield in Iraq. My classmates who were active duty soldiers were really upset because they would not get an extra vacation before leaving for Iraq at the end of school, but for me and other reservists it just meant finishing two weeks earlier to go home.

Normally near the end of AIT, students spend a few days out on a field exercise (FX) practicing our infantry training. Because of the situation in Iraq, we still stayed out in the field in tents, but we spent all our time cleaning out old barracks for the ITT Reservists who would be staying there before heading to Iraq.

In Basic Training, I respected but feared my Drill Sergeants and did everything in my power to stay invisible to them. In AIT, it was different. The Drill Sergeant for my platoon was a great guy, easy-going but still tough when he needed to be. Whenever he would drop us for push-ups, he would get down and do them as well to lead by example. I spent several nights hanging out with him in his office.

I received my first rank promotion at the end of AIT. I went from an E-1 Private to an E-2 Private. There is not much difference except an E-2 gets to wear the single stripe on his uniform (mosquito wings).

Link to my Basic Training post at Fort Dix, NJ
Posted by Noah Unsworth at 2:45 AM