We went out to Trapeze High to fly today, but I ended up on Dave's new toy, the Kiiking Swing. It was invented in the small Baltic country of Estonia where they compete to swing a full rotation, called "Making a Sun". Since the length of the poles increases the difficulty, the winner is the one who can make it over the top of the swing at the greatest height. As a kid on the playground, I always used to imagine attempting the feat on the swing set and I finally got my chance.


As Chris strapped in my feet and wrists, he explained that the trick is squatting quickly on the downswing while thrusting the hips and chest forward on the upswing. It took two short swings to get into the rhythm with Dave shouting "SQUAT!" and I almost made it over on my fifth, instead I ended up going over butt-first on the next backsweep. Ha! I ended up rotating seven times in reverse before I was able to change direction and go over twice forwards. On my last swing, I paused at the top for about a second. It was scary but so much fun!! 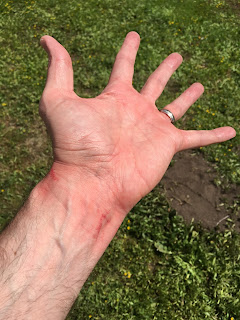 Kiiking is an exhausting workout and the straps scraped up my wrists pretty good. I think I expended the same amount of energy that I would have spent catching a full Trapeze class. I was still short of breath almost an hour later. Tori tried it after me, making it up to about 80 degrees but she couldn't quite make it over the top on repeated swings. (My heavier mass was definitely a help.) Now that she understands the rhythm, I know she will get it next time. 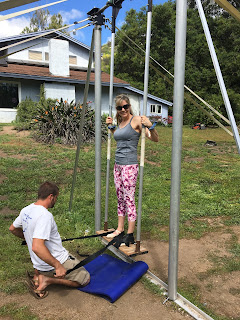 Tori and I stayed out at the rig as a camera crew arrived to film two Mixed Martial Arts fighters swing on the trapeze for an episode of the UFC show, "Dana White: Lookin' for a Fight". (Season 2, Episode 3) Din Thomas was too scared of heights to hook his legs on the bar for a Knee Hang but Matt Serra, the former UFC Welterweight Champion ended up getting his caught by Chris. As Din went over to attempt the Kiiking Swing, I went up on the board to help biscuit for a couple of the crew who wanted to try flying on the trapeze as well. When they sent up a drone, they filmed me dismounting from the board with my Man Splits. Maybe the footage will appear on the show, who knows. 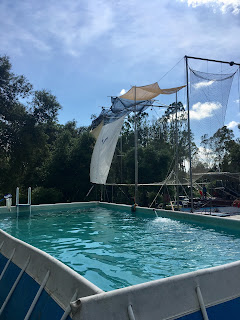 All through the day, Issac and Chris were filling up the new swimming pool on the former spot of the airbag rig. I am sure that the pool will get a lot of use during the hot days of summer. It looked real inviting from up on the Catch Trap.

Tori tried again the next weekend and got over the top on her first try. Yay!

Posted by Noah Unsworth at 8:23 PM No comments: Links to this post

Trapeze High set up their traveling rig out at the Lawrence Welk Resort this weekend for their St. Patrick's Day Leprechaun Palooza. Tori and I went out today to help up on the board and teach ground school. Lots of new flyers enjoyed their first taste of the circus. 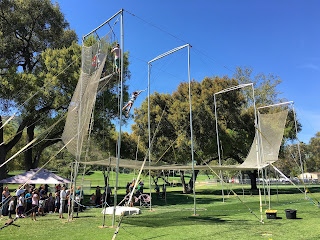 One of the safety line pulleys became stuck so Chris had to climb up the crane bar to fix it. After the repair, he thrilled the crowd with a suicide dismount from the top. Bombs Away!!! 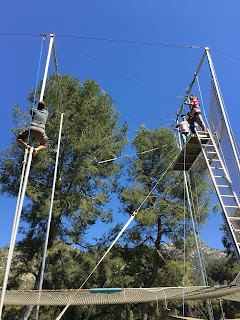 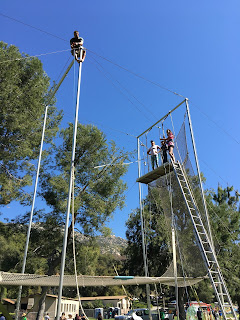 Posted by Noah Unsworth at 9:12 PM No comments: Links to this post

Roller Skating at the Dollhouse

For Jill's Birthday, she invited us down to the Dollhouse with Kenny and Tommy to skate on the two roller derby tracks. The Open Skate is only five dollars and it includes skates, pads and helmet. Tori looked cute with her matching pink helmet and wheels. With only a few people there beside us, I was able to practice my T-stops and Hockey Stops without worrying about hitting someone on a crowded rink. Kenny and Jill also taught us some fun roller derby pace line drills. 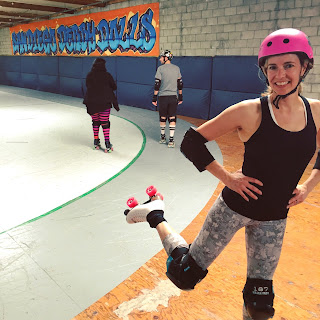 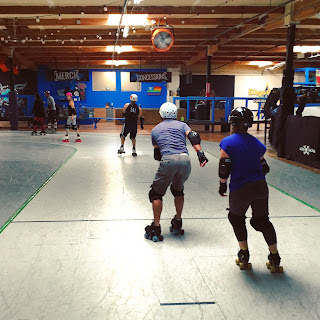 After getting our legs warmed up, we moved over to the Bank Track. It was Tori and my first time on the sloping surface and while it was easier to skate than we thought, the angle was much tougher on the feet. After a short practice jam, Tori was worn out from a turn as the Jammer. 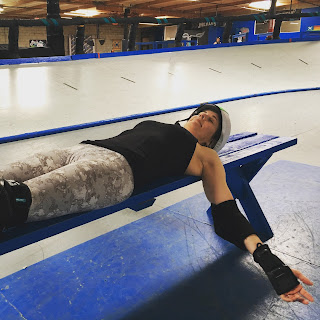 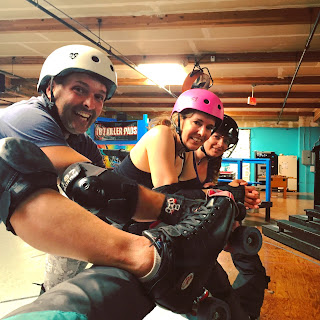 Before taking off all our gear, I based Tori in her skates for a few AcroYoga poses. After two hours of skating, it felt good to stretch out my stiff legs with the Super Yogi pose. Jill, Kenny and Tommy joined us and I took a lot of fun pictures of them goofing around for the camera. 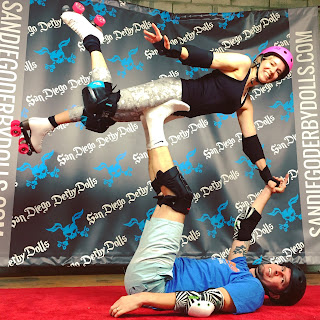 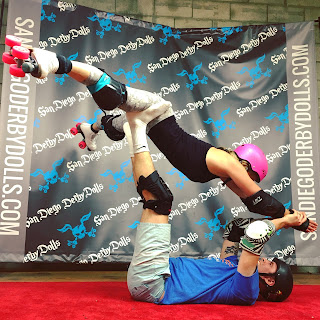 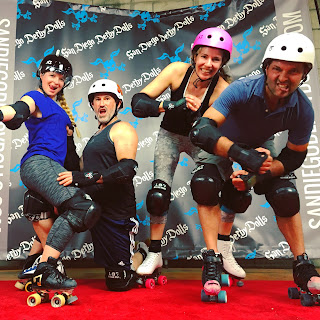 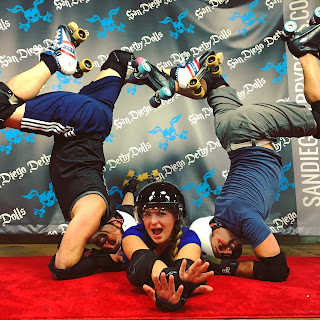 Posted by Noah Unsworth at 11:07 PM No comments: Links to this post