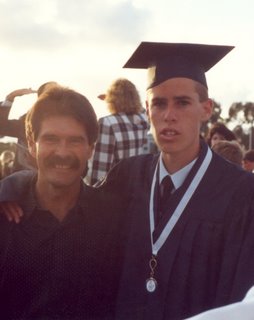 I graduated from San Dieguito High School this week, Class of 1990. It was a bigger moment in my life than when I turned 18, six months ago. It is hard to feel like a true adult when you are still going to classes in High School. A bunch of my relatives came to watch the Graduation Ceremony when I walked across the stage to receive my diploma. We all went out to dinner afterwards to celebrate at Neimans in Carlsbad. After dinner, I went to the Grad Night Party to celebrate with the rest of my class. 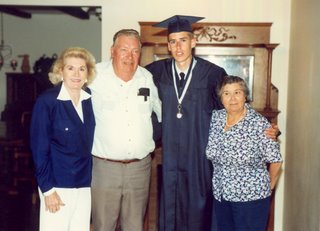 Grad Night was an all-night party in the school gym that lasted until the morning. It was real fun. We ended up popping the inflatable bouncer by having too many people jumping around inside at once. At one point I was buried under a dogpile, slowly being pressed down against the concrete as it deflated. We also had a casino area where I won a lot of fake money at the craps table. I turned it in for a bunch of raffle tickets at the end of the night but still didn't win anything. The best part of the night was the hypnotist show. It was very hilarious but it is hard to believe that it is not fake somehow. After the party ended, I took a little walk through the empty school for the last time, reflecting a little bit on my time there.
Posted by Noah Unsworth at 8:53 PM 2 comments: