I went to the horse races today with Chad. It was a beautiful sunny day at the Del Mar Racetrack. 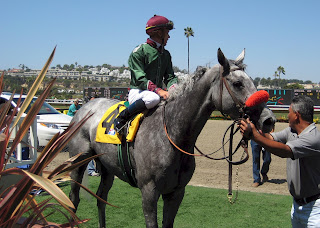 We mostly bet on the real long shots, but none of them won. Boo! In three of the races, my pick came within one of my bet. So close. 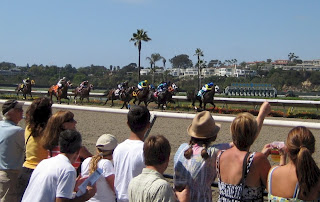 Whenever I go to the racetrack, it makes me think of one of my favorite movies, "Let it Ride", with Richard Dreyfuss. Classic!
Posted by Noah Unsworth at 9:48 PM No comments:

I went to Las Vegas with Chad this weekend to celebrate his 37th birthday. We flew in Thursday afternoon and checked into our room at the MGM Grand, my first time staying there. We were starving after we arrived, so we walked across the street to have lunch at the Hooters Casino. Afterwards, we relaxed at the hotel pool for awhile. 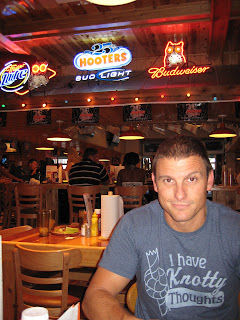 Our first night, we had tickets for the "O" Cirque du Soleil show at the Bellagio. Because we booked our reservations too late, we had the nosebleed seats in the very last row of the Balcony. I have been wanting to see "O" for many years now so I didn't mind. This show had divers and synchronized swimmers as well as the normal Cirque acrobats. I was amazed again by the stage in a Cirque du Soleil show, a giant pool with different moving segments to change it's depth. 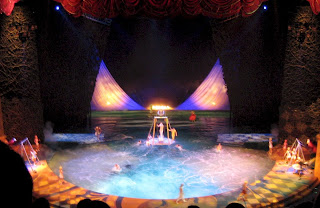 After the show, we walked back to the MGM Grand to meet up with Chad's friend, Bobbi, at the Centrifuge Bar. We ended up hanging out for awhile with Magnus and Andreas from Norway who we met at the bar. They were very interesting to talk to. Andreas had just gotten back from Afghanistan. He was stationed in the northern city of Mazar-i-Sharif with the Norwegian Army. He said the heat in Vegas was nothing compared to there. 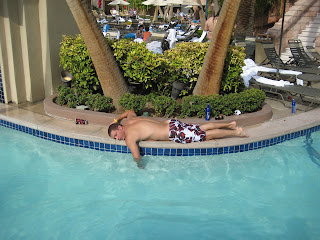 On Friday, Chad and I went down to the Innertube River in the pool area after getting some lunch at 'wichcraft on the Studio Walk. It was the best sandwich I have had in a long time. It was blazing hot by the pool, but it was nice floating around the river all day. Chad and I ended up hanging out with Jennifer & Allison who were in Vegas from Oregon. 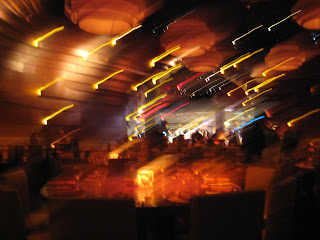 Chad, Bobbi and I went to the restaurant, Stack, over at the Mirage for dinner. It is a high end American-Style restaurant where we shared a bunch of delicious appetizers like Tater Tots with Bacon & Brie, Wings, Pigs in a Blanket and Chili Cheese Fries. The coolest appetizer was the "Hot Rocks", thin slices of sirloin steak that we cooked on a blazing hot rock brought out to our table. The Filet Mignon was very tender as well. 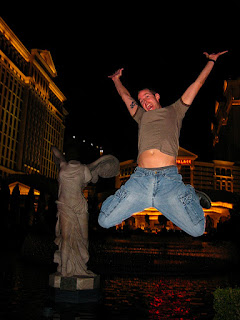 On our walk back to the MGM, we stopped at the Petrossian Bar in the Bellagio Lobby so Bobbi could have her favorite drink, a Key Lime Pie Martini. It was a classy little joint. I also placed another bet for the Chargers to win the Super Bowl this season at their Sport's Book. Third time's the charm, I hope. 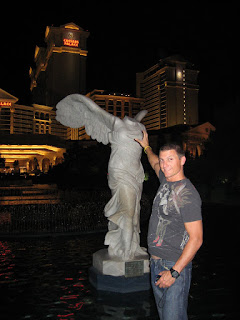 We met up with Allison and Jennifer when we got back to MGM. We went to Centrifuge for awhile before we took a taxi to Cleopatra's Barge over at Caesar's Palace. We had fun dancing to the live band. Back at the MGM, Bobbi had us on the list at the nightclub, Tabu, so we got in pretty quickly from the VIP line and I didn't have to pay a $50 cover charge. Bobbi was still partying hard when I left at 4am with Allison and Jennifer. 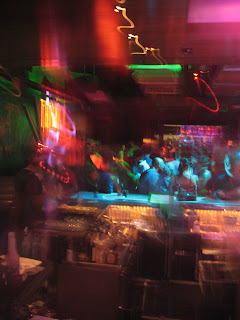 After another day at the pool, I got to have my first dinner at a restaurant, L'atelier de Joel Robuchon, with a star in the French Michelin Guide. It has a long counter that faces the kitchen so we could watch the chefs preparing our meals. We had four courses on our menu and each was amazing. 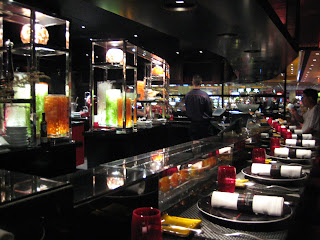 LES LEGUMES - Mediterranean vegetables layered with buffalo mozzarella (I am not a fan of eggplant, but I wanted more.)

LES FROMAGES - Selection of imported cheeses (I loved spreading the brie and the rich butter on the french bread. It took me back the dinners I had in Brest.)

LA CHARTREUSE - Green chartreuse soufflé, pistachio ice cream (It was the perfect mix of flavor as the ice cream slowly melted down through the light soufflé. The couple next to me ordered it as well based just on my reaction to it.) 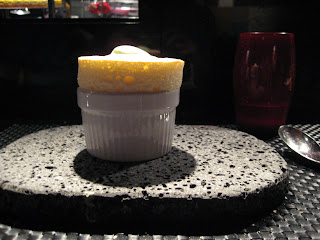 I was really full after eating the amazing soufflé, but they brought out a strawberry tart for Chad's birthday that was so delicious that I kept eating more. The strawberries were so fresh and light tasting. It went great with our cappuccinos. 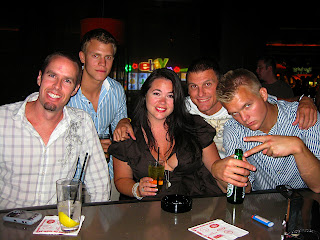 After dinner, we had tickets to see the Crazy Horse cabaret show at the MGM Grand which is a copy of the same show in Paris. Bobbi said it was allot like the Moulin Rouge as well. It was very entertaining with a couple of hilarious comedy bits mixed in with the dancing girls. We spent the rest of the night at Centrifuge, our third night in a row. The third night in a row hanging out with Magnus & Andreas as well. Heh! It was a great last night in Vegas.
Posted by Noah Unsworth at 8:13 PM No comments: