Well, I finished my first triathlon yesterday in Mission Bay with my friend, Robert. It took me about an hour and fifteen minutes, but I won't know my official times and splits until they mail them to me. It was a sprint distance triathlon with a 500 meter swim, 15k bike & 5k run. 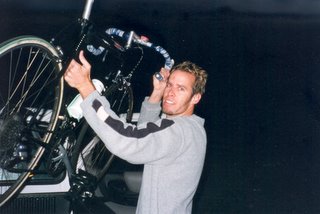 I did pretty well on my swim, but it took a little time to get used to the crowded swimming conditions. It threw me off my stroke and messed with my breathing. I actually bumped into Robert right near the end and we exited the water together. 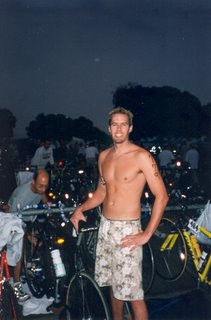 I sucked in the transition area where I switched to my bike. Robert was gone in about thirty seconds but it took me about 3-4 minutes. Because I was still wet, I accidentally ripped my number off my singlet when I was struggling to put it on over my head. I had to re-safety-pin it back on. Next time I'm not going to wear socks or a singlet until after the bike section.

I did okay on the bike but there are a lot of very fast guys out there. I passed about five guys, but I was passed by about thirty while I was in a higher gear. 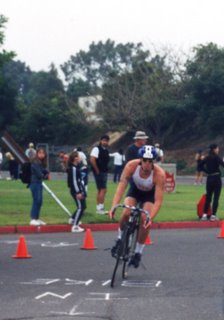 The run sucked. My legs felt like lead weights after getting off the bike. I took me two of the three miles for my legs to start feeling normal. I don't want to mention how many people passed me. I definitely need to practice on the bike and then switch straight to a run. I was able to sprint to the finish, passing a guy who was twenty-five. I was able to tell because we had our ages written on the back of our calves with a permanent marker. Each age group starts in 5 minute intervals after the professionals start. You know you are doing really bad when someone in their forties passes you. 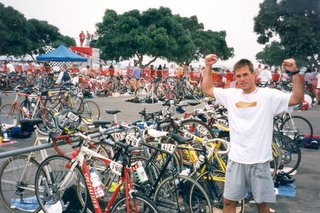 Robert finished in one hour and four minutes (this is his twelfth triathlon) and the pros who started one minute before us finished in about fifty+ minutes. It was really fun though and I am definitely going to do it again. I definitely think I can improve.
Posted by Noah Unsworth at 6:21 PM