I have posted my Hawaii Pictures from my trip to the island of Maui on Flickr and Facebook. 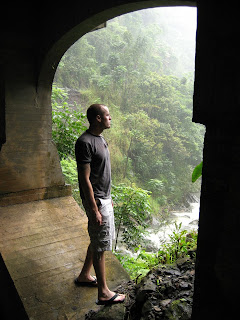 Here are the links: 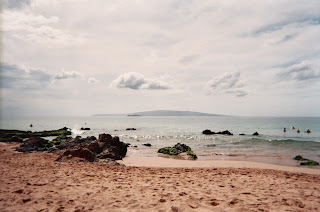 I went to Maui this week with Lindsey. This was my first time in Hawaii. We stayed in Kihei on the west side of the island at the Best Western Maui Oceanfront Inn. We had a very tiny room, but the location was great. Right on the beach! We had a great view of the Molokini crater out in the ocean channel and the large uninhabited island of Kaho'olawe nearby. This is the middle of Humpback Whale season, so we could see them breaching out of the water and blowing spray from the the shoreline the whole trip. 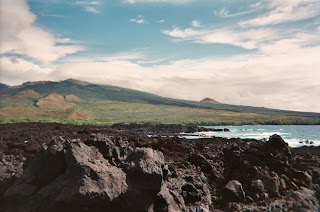 I arrived a day late on Saturday because I missed my flight by going to the wrong terminal on Friday morning. So stupid of me!!!! Lindsey met me at the airport with a flower lei and one of kukui nuts which was very cool. I was starving so we stopped at Maui Tacos. I would definitely recommend their Mexican food. It is rare for me to find a good taco shop outside of Southern California. We had dinner with Lindsey's family over at their condo, a short walk away from our hotel. We had an interesting show from the deck as a group of people from the condos blew conch shells as the sun set below the horizon. 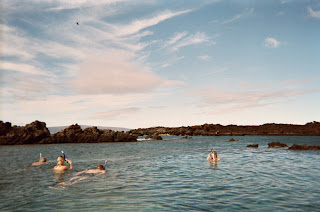 On Sunday morning, we drove south down the coast until the road ends. We wanted to go snorkeling at "The Aquarium" in the Ahihi Kinau Natural Area Reserve. It is a natural cove in the lava field protected by a shallow reef at the entrance to the ocean. There is a small path off of the main road that leads out over the lava fields. It is about a 45 minute hike over the sharp lava as we circled along the coast past small pools to reach the cove. The sun was out so it was great to pop on our fins and cool off in the water. 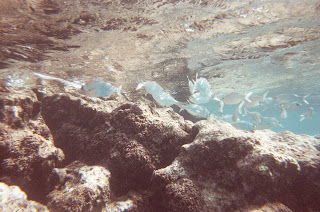 The Aquarium lived up to it's name as the water was very clear and it was full of colorful fish. I liked watching the small schools of fish feeding among the coral as we circled counter-clockwise around the cove. Lindsey pointed out an octopus cruising along the bottom before it hid under a rock. Near the end of our snorkel, I swam into a small shallow pool near the entrance to the cove with Lindsey's father, Greg. I thought it was the most colorful spot in the Aquarium. Greg pointed at a large black eel hanging out just to the left of where we had swum into the pool. Having those big teeth in my blind spot as I swam back out was a little scary but I was not too worried. Heh! 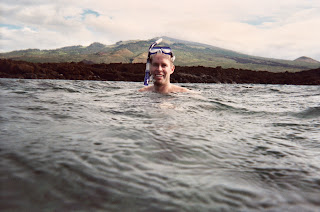 In the afternoon, Lindsey and I relaxed on the beach in front of our hotel before we went to dinner at the Sea Watch Restaurant in Wailea with her sister, Laurel and brother-in-law, Wayne. We had a nice table on the patio with great views of the sunset and had a delicious meal. I tried some of Lindsey's fish and I actually liked it! 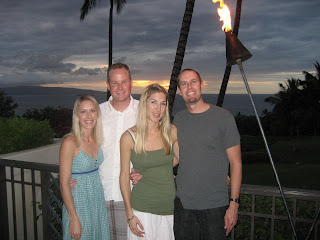 On Monday, Lindsey and I drove the famous highway to Hana. It is a sixty mile road that winds crazily back and forth along the beautiful coastline of the eastern side of Maui to the small town of Hana. We started off with a good breakfast where I had some Portuguese sausage and delicious french toast made with Hawaiian bread. Once we passed the town of Paia and it's surrounding farm fields, we tried locating interesting things to see from our guidebook. It was a bit tough at first. The first fifteen mile markers were missing and we discovered a sheer cliff where a trail down to a waterfall was supposed to be located but we soon had better luck. The Haipua'ena Falls was the first thing we checked out and then we drove out onto the Ke'anae Peninsula where the rough surf crashed against the jutting black lava outcrops along the shoreline. 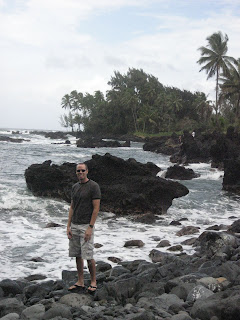 Our next major stop was the roaring Wakani Falls. We took the trail under the bridge to get closer to the falls right as a heavy rain shower hit. It is a steep little climb to get down there but hanging out under the bridge was a great way to sit it out. We stopped at the Black Sand Beach in the Wai'napanapa State Park before reaching the town of Hana. The jet black sand was a great contrast to the white water splashing back and forth onto the beach. We also checked out the blowhole in the black lava cliffs nearby and I went for a short swim in one of the freshwater caves. The crystal-clear water was much colder than in the ocean, but it was fun to swim underneath the low rocky ceiling. The only problem was the mosquitoes attacking Lindsey. They got her pretty good! 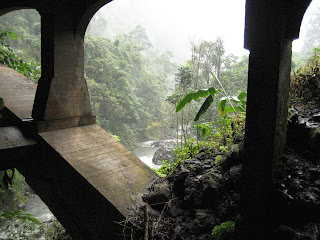 We drove past Hana and the road seemed to get even more windy before we passed the Wailua Falls and reached the Seven Sacred Pools about an hour before sunset. Because of all the rain on Maui lately, the Sacred Pools as well as all the other waterfalls we saw were gorged with water. Cool to look at, but it made it impossible to swim in their pools which would have been fun to do. The waves were giant out past where the large volume of freshwater from the waterfalls surged into the ocean. We wanted to complete the circle and continue along the highway around the dormant volcano, but the road had been closed due to the rain so we had to head back the way we came. We made it back around 8:30pm and had a nice dinner at the same place we ate breakfast. 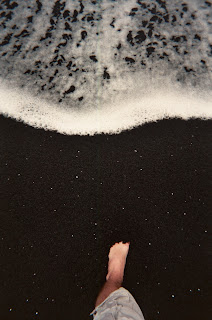 We got up early on Tuesday to go scuba diving. It was an overcast day as we boated out to the Molokini Crater from Maalaea Harbor on the "Pride of Maui". Molokini is a partially submerged volcanic crater that sits out in the channel between the two larger islands and our boat anchored in the shallow waters between the crescent shaped walls. Lindsey and I went scuba diving while Greg and Wayne tried out Snuba, a cross between scuba and snorkeling. The water was crystal clear all around us on the dive. Our dive master pointed out a shark in the distance but I was unable to locate it. I was too distracted by the sight of the Giant Trevally (called an Ulua in Hawaiian) that was swimming with it. I have never seen a fish that large before in real life. Awesome! Normally I get motion sickness easily but the Bonine that Lindsey's mother gave me in the morning worked like a charm the whole time we were out on the large dive boat. 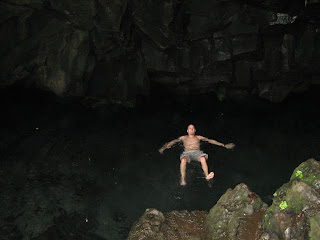 Our next dive spot was a shore dive at Turtle Cove. As the boat headed back towards the Maui coast line, we went right by a couple of breaching humpbacks, a mother and her calf. When we dove to the bottom on our second dive, Lindsey signalled to me that she could hear the whale song. I was shocked on how easy it was to hear between the breaths in my regulator. It was definitely the highlight of my trip. I took an underwater disposable camera on this shallower dive, but none of the pictures came out. I think it is because it was too overcast and there was not enough light for the camera. Our dive master lead us along a coral ridge on the sea bed and over to a large round opening in a wall of coral. It was my first time diving inside a cave, but it wasn't too claustrophobic because it opened out on three sides. Inside I saw two large sea turtles and a smaller one all tucked away in crevices before we swam back out into the open water. 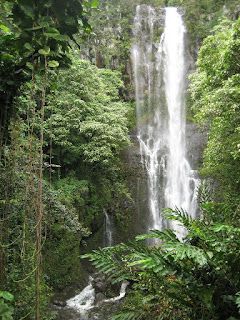 Near an outcrop of coral, our dive master pointed out to me a small red fish that quickly hid itself deep in the crevices. She spent several minutes trying to take it's picture, but had no luck. (Back on the boat she told me that it was a very rare fish that she had never seen before.) As we were waiting for her to lead us to the next stop, a fellow diver pointed right over my shoulder and as I turned to look, a giant sea turtle slowly swam right alongside me. It checked us out for a few moments before turning and lazily cruising off. Even though the water wasn't as clear as out at Molokini, this was my favorite of the two dives. We ended the day with a nice dinner party at the house of a family that Lindsey and her father met last year on their trip to Africa. It was a real Hawaiian dream home right on the beach with an amazing view. 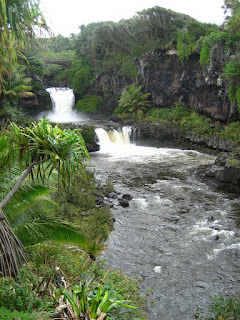 Wednesday was a day for relaxation but the weather didn't completely cooperate. We went to the beach at Wailea for a few hours before the rain started to fall. Wayne and I went snorkeling along the rocky reef on the south side of the beach. Besides the large amount of small tropical fish, we saw a moray eel in a rocky outcrop and a school of large fish with fluorescent blue spots running along their edges. That was pretty cool. We all went to dinner at the Five Palms in the Maui Mana Kai resort next to our hotel. During our meal, a couple of humpbacks swam pretty close to the shore giving us a nice show from our table. 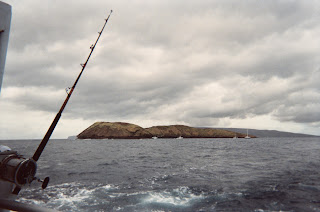 Our last day in Maui was the sunniest day of the trip with bright blue skies. We stayed at the beach in front of our hotel for as long as possible before we had to leave for our flights at noon. I went snorkeling around the rocky point twice and I didn't want to leave the water the last time. With the sunny sky, it seemed the water was even clearer than before. Seeing a large puffer fish and listening to the whale songs for the last time was a great way to end my vacation.

Maui on Dwellable
Posted by Noah Unsworth at 9:02 PM No comments: