My friend, Greg, and I went to the Torrey Pines Glider Port on Sunday. I had given him a Tandem Hangliding Gift Certificate for his Birthday. It was beautiful day and there were allot hangliders and paragliders up in the air over the cliff face. Greg went first because he only weighs 145 pounds, but I got to take pictures on the edge of the cliff with him as he took off with the instructor. 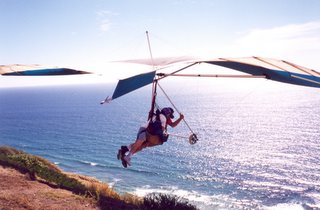 The instructor let him control it for most of the time as he flew around for about twenty minutes over Black's Beach. I ran over to take a picture as he came in for a landing. They overshot the landing area and I had to dive out of the way as they came in too fast. They ended up landing in the gravel area and nearly hitting a crowd of spectators. 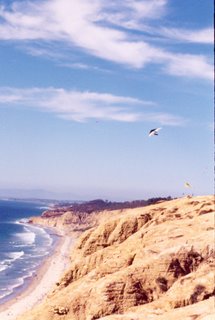 The wind started to die so they told me I would have to wait for it to pick up for my turn. After about a hour of waiting, one of the smaller hangliders in the air came too close to a paraglider (looks like a parachute) and spun out of control. He crashed into the cliff and the lifeguards had repel 200 feet down to rescue him. He was alive but had major injuries. Because of the accident they cleared the sky of flyers, so I will have to go back there again for my turn.

Even though I didn't get to fly, it was a pretty exciting day.
Posted by Noah Unsworth at 6:04 PM No comments: