I can't believe that it has already been a year since that perfect day in Hawaii when I married Tori. To celebrate our first wedding anniversary, we took Friday off and booked a room just up the coast in San Clemente. I have been looking forward to staying there since I have driven through the city so many times in the past without stopping. Leaving work, our weekend getaway began with an especially beautiful sunset. Amid the fading blue sky, the setting sun illuminated the scattered clouds with multiples deep shades of orange and red as we drove north through Camp Pendleton. 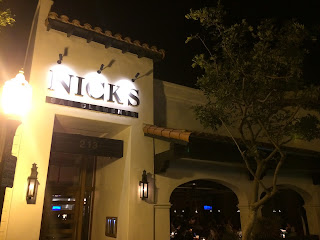 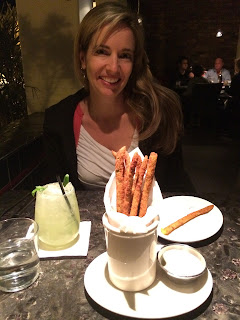 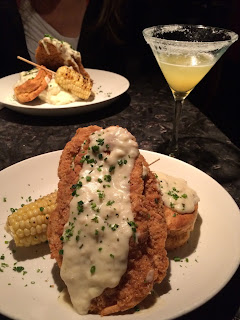 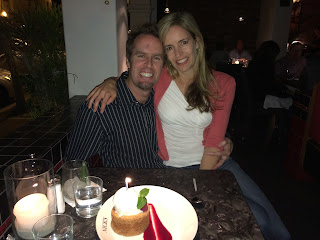 We were staying at the Patriot's Motel, a small roadside inn on El Camino Real in Downtown San Clemente. It wasn't fancy but it was clean and we had a huge bathroom. After checking in and drinking a couple glasses of the complementary white wine, we walked over to Nick's for our anniversary dinner. Seated at a nice table beneath the front arches, we ordered cocktails and the crisp, tasty Asparagus Fries. The Buttermilk Fried Chicken on the menu sounded so good, we both ordered it and we were not disappointed. We heard the Warm Butter Cake was amazing so we saved room for dessert. It was so worth it! With a scoop of vanilla ice cream on top, it had the perfect amount of baked crunchiness on the outside while still soft and moist at the center. We are definitely coming here again. 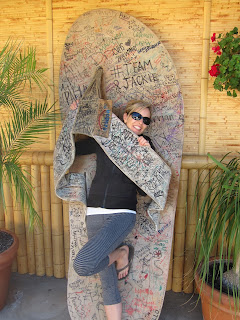 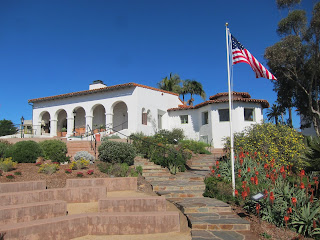 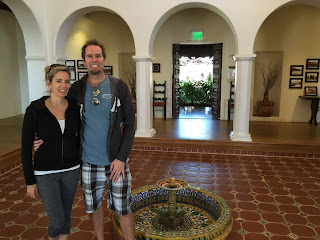 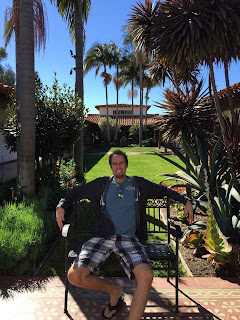 Friday morning, we walked over to Starbucks so Tori could try their new espresso drink, the Flat White. She had acquired a taste for Australia's favorite style of coffee while living there. After a quick trip to the Rainbow Sandals Outlet so Tori could buy a new pair of her favorite sandals, we came across the sign for the Casa Romantica on our meandering drive back. While exploring the sprawling cliff side home of the town founder, Ole Hanson, it reminded me of a poor man's Hearst Castle. While Randolf Hearst had to curtail construction on his elaborate mansion during the Great Depression, his contemporary, Ole Hanson, lost the home he built in 1927 to the bank. Designed by the same architect who built Nixon's Western White House on the other side of town, Casa Romantica has seven bedrooms and seven bathrooms surrounding a central courtyard with wonderful views of the ocean from the rear gardens. 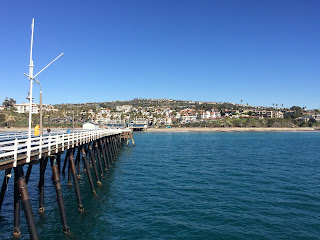 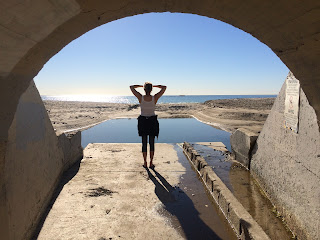 After dropping the car back at the Motel, we walked down Avenida Del Mar to the San Clemente Pier. In the cool shade beneath, we watched the turquoise water crash against the pilings before walking out to the end of the 1,296-foot pier. Originally built in 1928, the pier was rebuilt twice in 1939 and 1985 due to heavy storm damage. Below, we observed a cormorant swimming fast under the clear water with it's webbed feet to catch a small fish trying to escape among the pilings. Back at the base of the pier, we stopped for a couple drinks at The Fisherman's Bar. 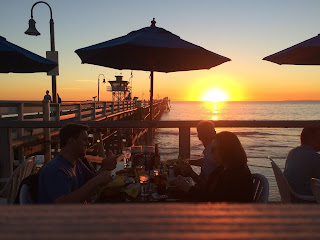 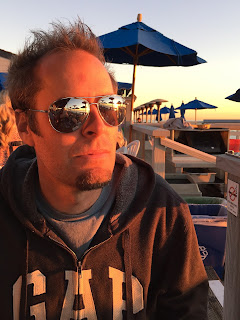 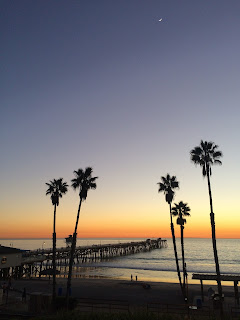 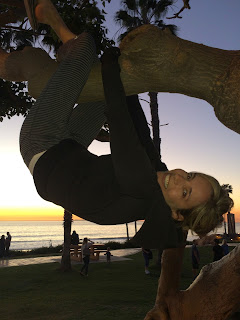 After our drinks, we walked South along the San Clemente Pedestrian Beach Trail until we reached the San Mateo Rocks directly off shore of Riviera Beach. I have seen those rocks many times from the train that runs right along the beach. They look close to shore but they sit further out than the end of the pier. Strolling back along the beach, we stopped once more at The Fisherman's for fish tacos and to watch the sunset. It was pretty, highlighting Catalina Island in orange light against the skyline, but without the dramatic clouds of Thursday night's sunset. (I also tried a Oyster Shooter for the first time.) On the walk back to the motel, Tori climbed a tree in the park to recreate a fun photo from our Wedding Reception. Next year, it will be my turn. Ha! Since we ate light at the pier, we went out for a later dinner at Duke's. Good Burgers! 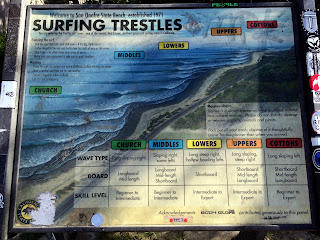 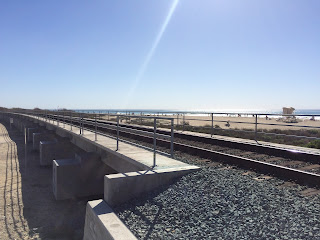 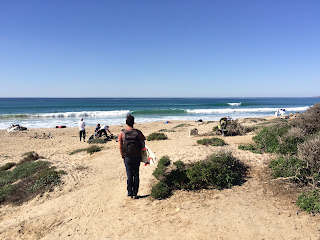 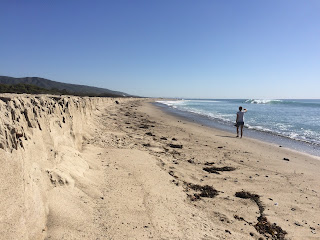 Since we were checking out at 11:00 am on Saturday, we first walked next door to the Bagel Shack for breakfast. It was crowded but the bagel sandwiches were very tasty so we bought a couple extra for Sunday morning. Heading south on El Camino Real, we stopped at Rip Curl's Trestles Surf Outlet. Tori bought some clothes while I found a pair of trunks I liked for $30. Cheap! Since I had never been to the famous Trestles surf break before, we parked at the Christianitos lot and hiked down the long path to the beach. Crossing the railroad tracks at Uppers, we found 2-4 foot waves as we walked down the shore to Lowers and Middles. With the San Onofre Nuclear Plant visible around the point, we turned around at the Churches break to head back home to Encinitas. It was only a 30 minute drive from San Clemente, but the empty land of Camp Pendleton creates a nice physiological separation from Orange County. It feels so far away, yet it is so close.
Posted by Noah Unsworth at 9:35 PM No comments: