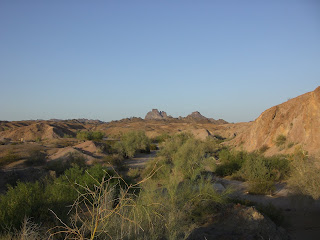 I spent my Memorial Day Weekend camping out at the Colorado River. I drove out with my friend, Chad, on Saturday and drove back on Monday afternoon. It was his first time there. We were in a group of 20 in the uncrowded campgrounds of Pichacho State Park. I think the 18 mile dirt road helps keep the place under the radar which is nice. Chad and I got pretty light-headed from the leaky gasoline cans we filled up in Yuma for the boat. 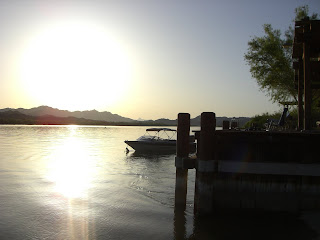 The water was really high this weekend so most of the sandbars where we hang out during the day were submerged. We were lucky and found one of the few left above water tucked inside a reed-filled inlet that led to a small hidden lake. Chad and I decided to explore the lake on kayaks. It was beautifully surreal as we had to paddle through the multitude of dead trees poking up out of the water all over the lake. There was allot of wildlife; loud bullfrogs, large cranes and a small flock of vultures. 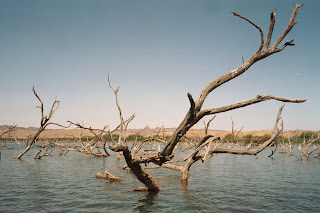 Most of our time was spent hanging out in the sun on our sandbar, tossing a Frisbee or snacking. We also got a good amount of boat time. It was my first time wake boarding in three years and Chad's first time water skiing in about fifteen. One of the kids we were with was very good and could get really high air on the wake board. 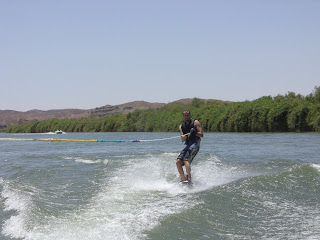 Six of us had a nice two hour float down the river from our sandbar to the North Dock on a makeshift raft of tied up inflatables with a beer-filled cooler sitting in the biggest inner tube. Casey and her boyfriend made everyone Bacon Cheeseburgers for dinner and we relaxed by the fire that I started. 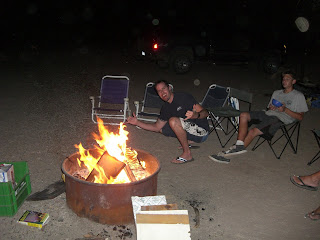 On our last day, the river was mostly empty of boats so I got some nice pulls in the morning on the wake board with great flat water. Chad tried wake boarding for the very first time and was able to get up on just his third try. Very good. We all hung out at the North Dock before going for another float down the river. We ended up at a small submerged sandbar where we hung out for awhile tossing a football and hanging out in the sun. 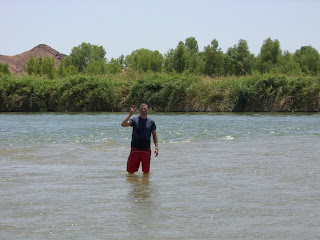 On the way home, Chad and I stopped at Cracker Barrel in Yuma, AZ. It was the first time I have ever eaten there. I had the chicken breast that is covered in broccoli, cheese and some type of crunchy crust. It was really good.
Posted by Noah Unsworth at 9:32 PM 1 comment: