My First "Big" Erection of a Trapeze Rig

Trapeze High was hired by ViaSat to set up a rig for a private event at their corporate headquarters on Friday. Since I have never participated in the "Big Erection" of a Trapeze Rig, I took a vacation day from my regular job to help set it up on Thursday. At 10am, I met up with Dave, Mark, Chris and Issac at ViaSat where we began unloading the trailer and marking off the dimensions of the rig in the rear parking lot. Driving the 16 metal stakes that would support the four crane bars turned out to be the longest and hardest task of the day. After breaking our first sledge hammer on the second stake, we rented an air-powered stake driver but it was unable to sink a stake even an centimeter into the hard ground. With a new Sledge Hammer from the nearby Lowe's, we reluctantly returned to slowly pounding them in by hand. 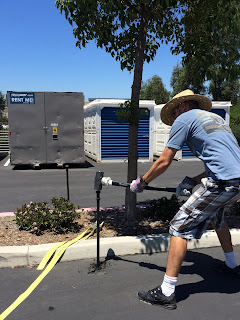 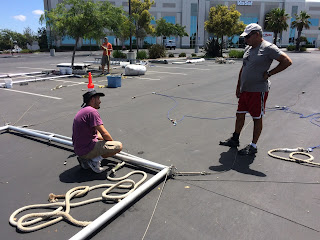 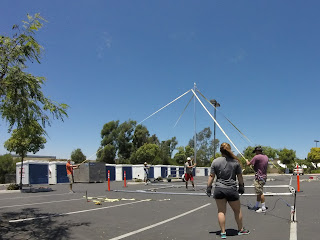 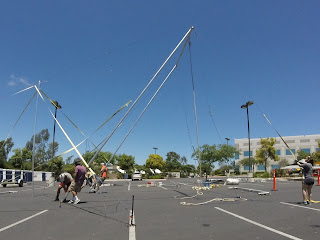 As Dave left to return the useless stake driver, Rhiannon arrived to help for a couple hours. After the gloves rubbed the top of my thumbs raw from sledge hammering, we finally had enough stakes driven to raise the Gin Pole and Catch Crane. It was good practice raising and strapping down the single Gin Pole necessary to erect the massive Catch Crane. Securing the Catch Crane to the upright Gin Pole with strong cables, the four of us slowly pulled the Catch Crane upright as Rhi steadied it with a guide line. With the erect Catch Crane secured to stakes with four long straps, we were able to take down the temporary Gin Pole and raise the Apron Crane in its place. Driving the remaining stakes, we were ready to raise the Fly Crane and Pedestal Crane at 3pm. 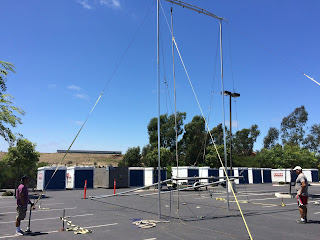 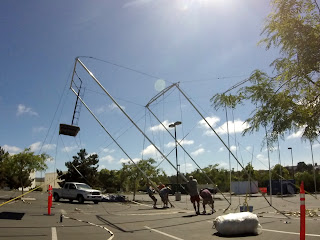 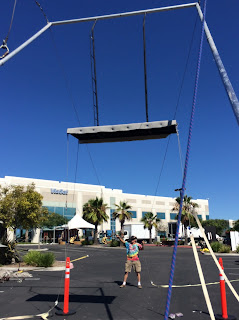 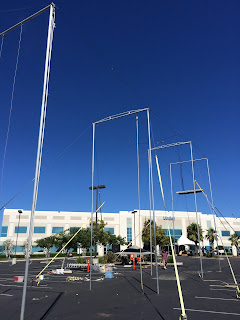 When Dave came back from Escondido with the missing pedestal ladders, we raised the Fly Crane halfway and hooked the Pedestal Crane to it. Bolting the Pedestal Board to the low-hanging Pedestal Crane, we started raising both cranes at the same time, loosening and tightening the support straps as we slowly stepped the towering poles upright. After the slow progress with the stakes, it was gratifying to see all four crane bars raised in the final two and a half hours to finish up at 4pm. With my new GoPro camera, I was able to capture the time-lapse video below of the entire Trapeze Rig erection in just two and a half minutes.

On Friday, Dave, Mark, Chris and Isaac finished squaring the rig and putting up the net while I was at work, but I left early to drive over before the ViaSat Event began at 3pm. Chris hung the Catch Bar and Rhi took a few swings into the net ten minutes before the first flyer at the party climbed up the ladder to the pedestal board for the first swing. It was a well-oiled machine with Gina overseeing the release forms at the front table, Mark on the Safety Lines, Rhiannon and Leana on the Board, Isaac controlling the Ladder and Kenny teaching Ground School. Susan and I took over on the board after the first hour and we all rotated through the different jobs until the event ended at 7pm. There was a long line of eager flyers during the event, ninety-nine percent of them attempting only a single beginner's swing, but a few got back in line to attempt a back-flip or knee hang. In the middle of the event, Chris climbed up to the catch trap and caught several club flyers performing for the spectators. 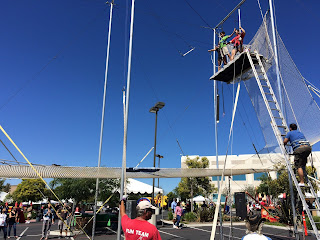 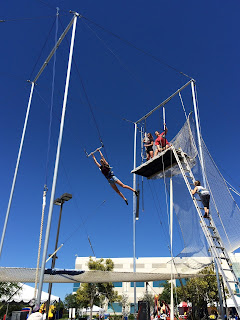 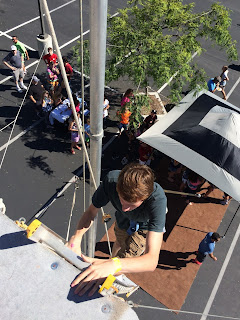 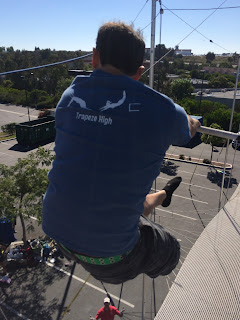 As soon as the last flyer landed in the net, we started dismantling the rig. With more than twelve people to help, we had the rig down and loaded into the trailer within an hour as the sun set. (Except for those damn Stakes!!!!!!!) As hard as they were to drive into the ground, it was just as hard pulling them back out. The chain kept snapping on the Stake Puller so we had to make another run to Lowe's for new chain and a gigantic pipe wrench to help loosen the stakes up first. The last one finally pulled free around 9:30pm. 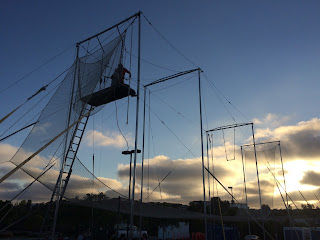 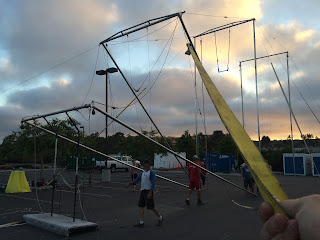 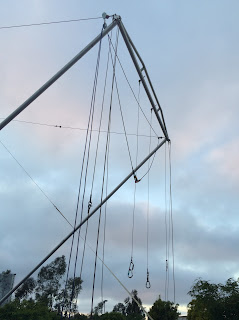 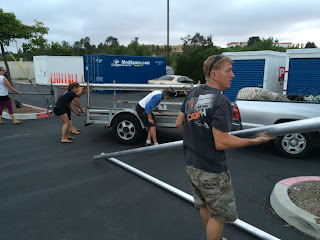 The next morning, my hands were still sore from hammering stakes on Thursday as Tori and I drove out to work our regular Saturday trapeze classes. Before Tori caught the 10am class, I placed my new GoPro camera up on the Escondido Rig for the first time. Below are some of the catches filmed near the top of the catch crane.

I wore the GoPro on a chest harness when I caught the second class, but it mostly captured a view up my nostrils instead of the flyers. Next time, I will adjust the camera angle further down to hopefully a catch a more exciting view.
Posted by Noah Unsworth at 7:36 PM 2 comments: