During the Labor Day BBQ, I finally took my Turnaround out of safety lines. It was a bit crooked and I kicked my feet in mini-panic as I dropped to the net but my second one was much cleaner. Now that I have learned the Turnaround, I can start working on different variations like the Turnaround Pushaway where I would dismount with a back flip to the net. Betty likes to call it the Razzle Dazzle. 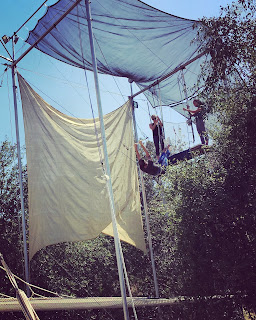 After a long layoff, Tori threw her Cutaway Half, a more difficult Turnaround trick which ends with a full forward somersault and a half twist. It was pretty as ever. I keep telling her that I want to catch it some day.

After my successful Turnaround, I decided to try a new trick that I have seen a hundred times and never attempted, the Whip. At the backend of my swing I brought my feet between my arms under the bar with straight legs and my face staring at my knees. At the sound of the first Hep command, I had to arch my body into a back-bend before I released the bar on the second Hep. After two practice attempts to the net, Isaac caught my third since he was already hanging out in the Catch Trap. With two six footers, my toes dragged in the net each time unless I bent my knees. It was fun to catch a new trick.

Now that I have the Turnaround and the Whip to add to my Splits out of lines, I think I am ready for the show in November. Should be fun!

I was out practicing for the show again today and working on more height for my new whip trick. I have allowed myself to get lazy about my takeoff so Dave and Lindsay were helping me get back my form.

Posted by Noah Unsworth at 8:57 PM