I took Chad to Knott's Soak City water park on Friday for his birthday. We really stood out. I think we were the only guys over 20 that weren't there with their children. The best ride of the day was one I have never tried before, the Pacific Spin. I prefer to call it the Toilet Bowl. It is a short two person raft slide, but we caught air launching off the last drop. I don't know what was scarier, being able to observe the steep drop below us or going over backwards like Chad. Our weight and momentum took us high up the walls before we flushed out the bottom. It was a blast. 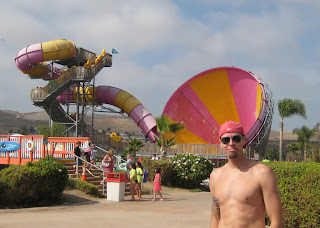 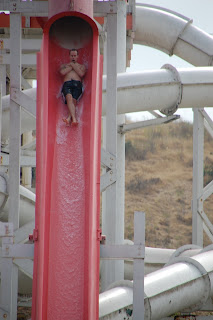 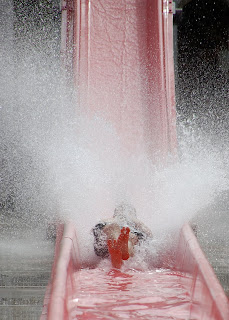 The four high-speed slides at Soak City don't compare to the freaky seven-story Drop Out slide at Raging Waters, but they are still fun. Banzai and Pipeline whip you around in pitch darkness at high speeds before spitting you out the bottom. Emerging into the blinding light, I banged my elbow hard against the side of the tight chute, thinking I was about to land in a splash pool. Dropoff is the closest to the slide in San Dimas with a single steep drop, while Straight Shot is the fastest with two combined shorter drops. Gaining so much speed, I was afraid I wouldn't stop at the end. All four slides are excellent wedgie machines. 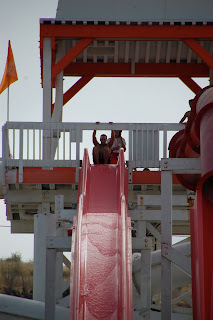 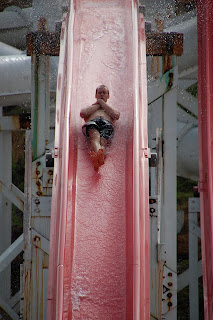 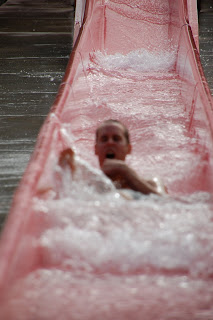 Posted by Noah Unsworth at 11:23 AM No comments:

The 10 years between graduation and my first high school reunion seemed to flow at a normal pace, but time really flew up to the 20th. This time, the 20 Year Reunion for the 1990 Class of San Dieguito High School was held at the Bristol Hotel in Downtown San Diego on July 17th. 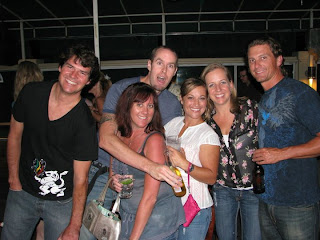 Chad came with me to Yogi's the night before the reunion for an unofficial get together with others from school. It was a nice group. It was fun hanging out with everyone and playing pool with Julie and Megan. I ended up drinking too much tequila. My hangover lasted till 3pm on Saturday, recovering in time for the reunion at 7. A delicious omelet for breakfast at The Little Moore helped. 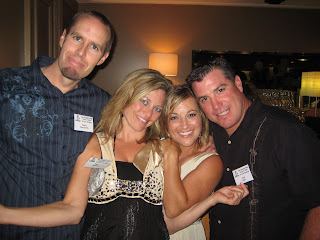 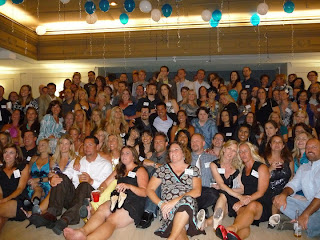 I must admit, I preferred the location of the 10 Year Reunion at the Berkeley Ferry on the harbor instead of the Bristol Hotel. It got pretty hot inside the hotel ballroom with over 200 alumni and it got very echoey, making it hard to hear conversations sometimes. It was a big improvement when the roof slid open after the group photo. It was great hearing what everyone was up to these days and I had a blast out on the dance floor during the last hour. 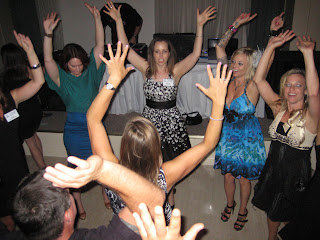 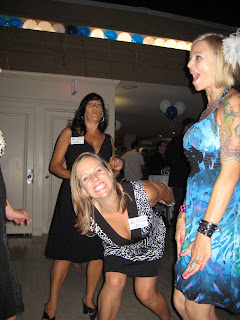 After the reunion ended at midnight, I walked with a big group over to the Yard House for more drinks till 2 am. We first tried the Star Bar in the Gaslamp Quarter, but they wouldn't let such a big group enter all at once. Maybe because of the heavy police presence right outside. A fight had just ended and they were loading a handcuffed man into the back of a paddy wagon. He had the #*@% kicked out of him, his face all black and blue.
Posted by Noah Unsworth at 8:55 PM No comments:

I went out to the Colorado River for the 4th of July weekend. I love it out there but it has been three years since I've been camping at Picacho State Park. Chad and I drove out Friday night to meet up with the rest of the group. When we finally got on the 18 mile dirt road at 10 pm, we spotted a vehicle chasing us down. It turned out to be a Ranger warning us to slow down because of soft road conditions up ahead. After we arrived, we all walked down to the river for a night swim. I got to sleep around 3 am, but Chad and a couple others stayed up till dawn talking around the campfire. 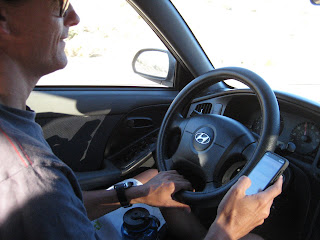 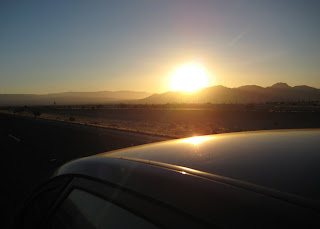 Saturday morning, I went out with Blayne and Clint to wakeboard on the empty river while the water was still flat. We had the largest yellow dragonfly land on the boat. They are so cool. The river level was high, so we set up our beach camp on one of the few exposed sandbars. Normally, that makes them crowded, but we lucked out and only had to share it with one other group the entire weekend. We had a great inflatable raft with a hole in the center to relax on in the river. At the end of the day, we floated down to the campgrounds dock with it. 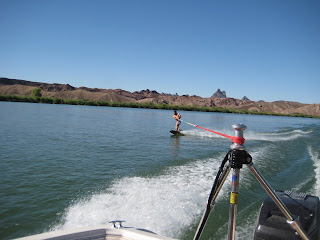 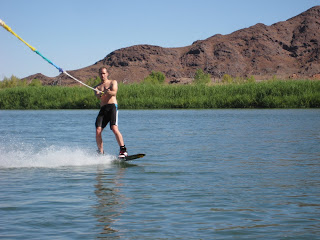 The campgrounds were practically empty this trip. I have never been to Picacho in the middle of summer before. It was hot, but not too bad because of the cool breezes. The water was very nice, 78 degrees, and I didn't see or hear one buzzing mosquito the entire time. At night, we would sit out in the dark, away from the campfire and look at the stars. They are so bright out there. I like how I could easily see the dense band of stars pointing to the center of the Milky Way Galaxy. You can also hear the wild burros braying at night, but I have never spotted one on any of my trips. 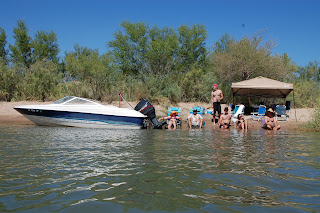 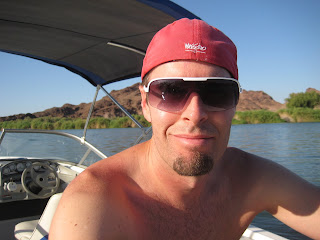 On Sunday, Lenny and I decided to paddle the kayaks up river from the North Dock to our beach instead of taking a boat. It turned out to be pretty brutal, so much paddling as the landscape barely moves. You can't stop to rest either because the river will pull back all your forward progress. I am glad I did it though. I spent more time in the sun the second day, only got burned a tiny bit. I am bummed because I lost my favorite sunglasses to the river. The wind caught them and blew them overboard. 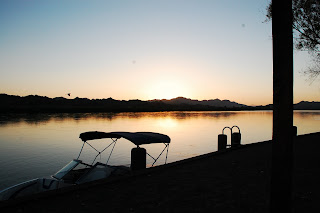 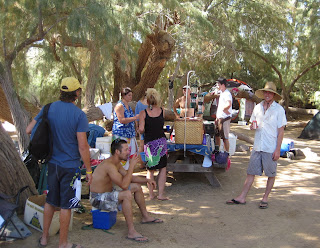 Blayne had his new boat out at the river. It's bigger with a bimini cover for shade and a nice step on the back to get in and out of the water. We did some more wakeboarding in the afternoon. The water was very choppy because of the constant flow of boats up and down the river. I had to take shorter pulls because all the bumps make it harder on the quadriceps. It took a few tries, but Chad got up on the wakeboard. I wish I got a picture of him pulling the perfect faceplant. Heh! 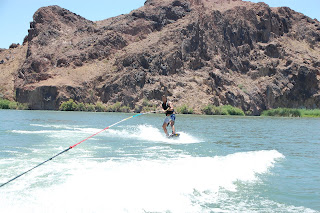 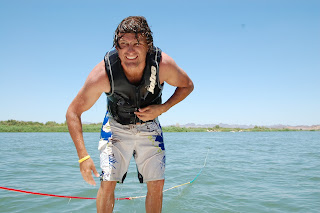 Driving home, Chad and I stopped at Cracker Barrel across the border in Arizona. They need one of those restaurants in San Diego. The food is so good.
Posted by Noah Unsworth at 6:37 PM 1 comment: