I went to my 10 year Reunion for the Class of 1990 from San Dieguito High School on Saturday, August 19th. It was held Downtown San Diego on the "Berkeley", an old steam ferry originally from San Francisco Bay, permanently anchored in the harbor next to the "Star of India". 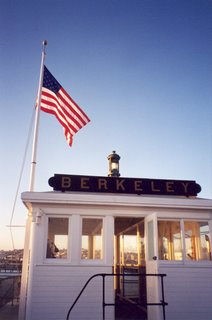 I hung out with Bobby and Julie and it was really fun seeing all the people I haven't seen for 10 years. I had kept in touch with a few people, but it was nice to see my friends, like Michael Clarke, who I had gone to school with since 3rd grade. I have a bit of a bad memory, so it was so nice to have so many memories come rushing back to me as I saw faces from the past. 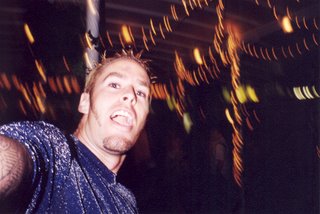 It was a fun night with good food, lots of drinks from the bar and plenty of dancing. I just wish Mary Ann could have been there. I know a lot of people who dreaded or want to avoid their reunion, but I had a blast. 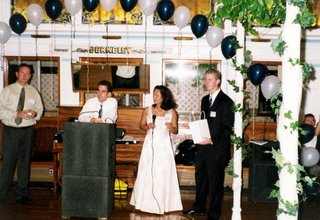 I was voted "Most Changed" during the awards ceremony. The prize was a engraved wine glass. I took a picture of the large gathering as I returned from the dais. Too bad they didn't give the type of awards that Homer Simpson was so proud of winning at his reunion on The Simpsons, like "Oldest Car", "Lowest Paying Job" or "Traveling the Least Distance to get to the Reunion". I might have grabbed one of those as well. Just Kidding! Heh! 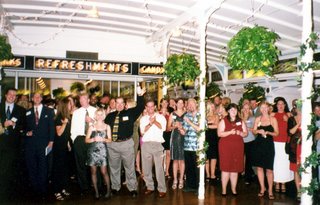 After the reception at the "Berkeley" ended, I went with Yancy, his wife and a large crowd into the Gaslamp Quarter to the dueling piano bar called "Sing Sing" on 4th Street. There was a sizable group of us even after the place closed with people not wanting to end conversations with friends they hadn't seen for a long time. I ended up walking back to my car around four in the morning. 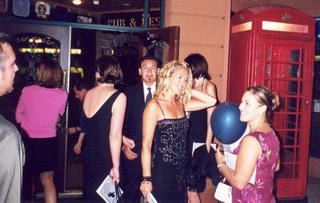 Posted by Noah Unsworth at 8:00 PM No comments: