Growing up in San Diego's North County, I watched the Hot Air Balloons soaring over Del Mar at sunset countless times and I have always wanted to fly in one. Wishing to save the experience for the right romantic moment, I knew exactly how I wanted to propose to my wonderful girlfriend, Tori. After purchasing the perfect engagement ring, I booked a private basket for this Sunday with Magical Adventures Balloon Rides and crossed my fingers for great weather. 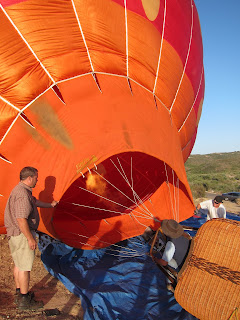 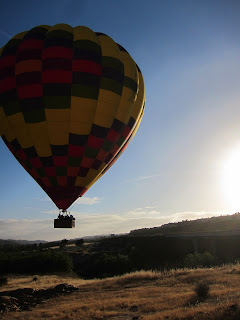 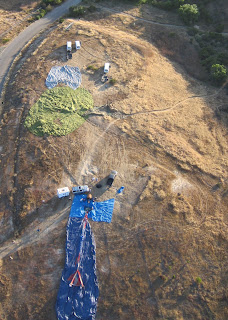 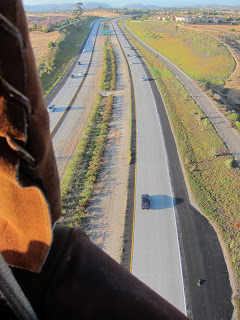 Except for some vague clues from me about what to wear, Tori didn't know I was taking her for a balloon ride until we drove to the meeting place off of Villa de la Valle in Del Mar. After signing the waiver, we watched as the pilots released a white helium balloon into the sky to study the wind patterns and observe the scattered clouds before we all climbed into the van to drive to the appropriate launch site for the day. 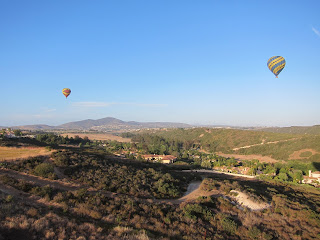 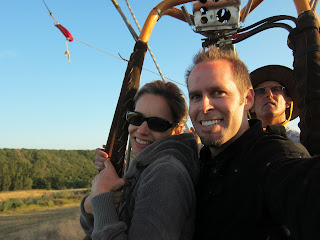 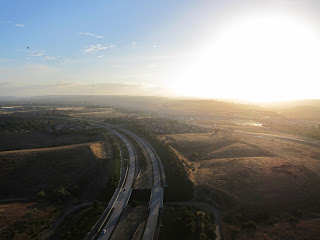 Arriving at the first launch site on Carmel Valley Road off of Highway 56, we waited as the pilots studied the sky again before they decided the wind was good enough for this location. It was 6:30pm when the ground crew started pulling the wicker baskets off the trailers and started spreading out the balloon envelopes while our pilot, Michael, gave us a flight briefing. While Tori and I waited for our private balloon to launch, three huge balloons that carried fifteen passengers each inflated around us and took to the sky. 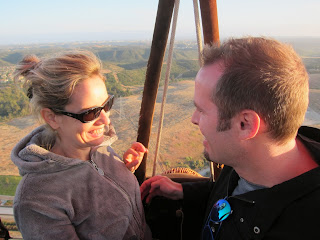 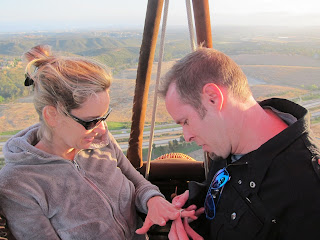 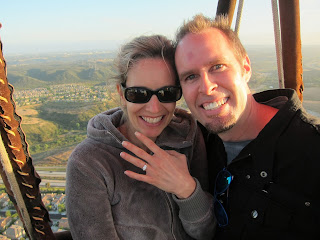 With big fans, the ground crew blasted cold air into the nylon envelope to inflate our balloon enough for Michael to ignite the propane burner on top of the basket. As the envelope slowly rose from the ground, four guys struggled to hold the bucking basket as Tori and I climbed in. As they released us into the sky, the basket immediately calmed as we drifted up with the flow of the 10 mph wind. Cars honked up at us as we hovered low over the Ted Williams Freeway and passed over the nearby houses. Floating over a line of trees, we descended to our lowest point of the flight as we crossed the old tomato fields while our basket scraped against the top of the high weeds and scared several hidden rabbits who took off in all directions. 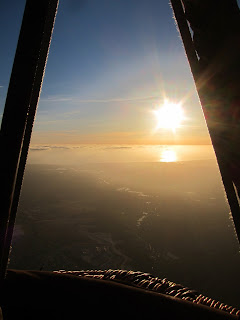 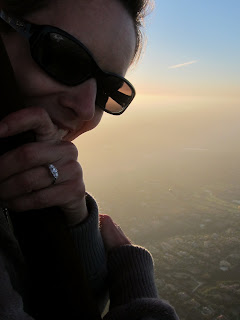 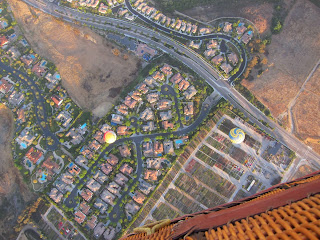 As we cleared the abandoned fields, Michael ignited the flame for a long burn as our balloon in the shape of a giant Strawberry ascended to a cruising altitude over 2,500 feet. This was the moment I had been waiting for as I handed my camera to the pilot and pulled the ring box out of my pocket. With no room to kneel down in the tiny basket, I said Tori's name as she watched the other balloons in the sky. She turned around thinking I just wanted to pose together for a picture, but instead I displayed the ring and asked her to marry me. She said YES! 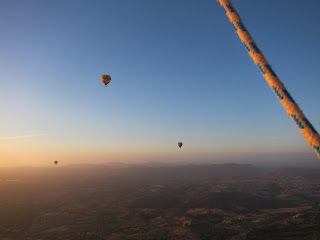 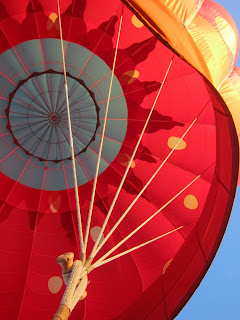 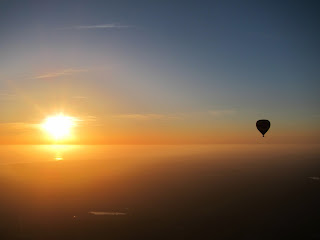 It was a beautiful sunset as we kissed and flew over the flower fields of Evergreen Nursery and the small lakes and huge houses of Fairbanks Ranch. Except for a low marine layer off the coast, I had the clear skies I had wished for filled with hot air balloons hovering around us at all different altitudes. Three glowing high in the sun to the west, another three hanging low over The Farms Golf Club and two directly below us at ground level to provide an interesting height perspective. It was so calm, we had no fear staring over the side of our basket at the giant drop beneath us. 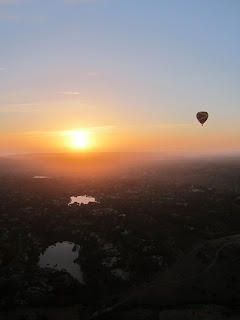 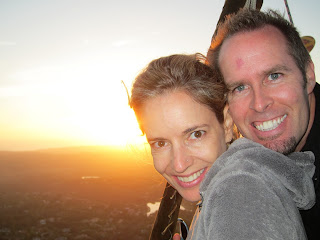 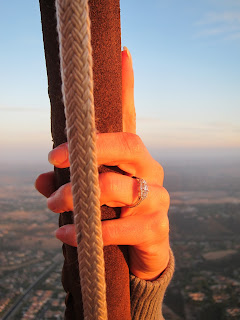 Between the occasional roar of the propane burner, it was very tranquil as we floated north within sight of the Del Mar Fairgrounds and the Carlsbad Power Plant. As the sun slowly dropped below the horizon, we crossed over San Dieguito Road where we could see two balloons to the South, high over the golf course of The Santaluz Club with the antenna towers of Black Mountain rising behind. Ahead of us we could see three more balloons descending into the landing sites along Camino Del Sur. As the sky darkened, we could see the flames illuminating their interiors for the first time. 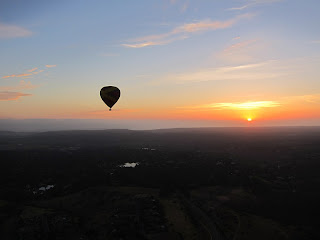 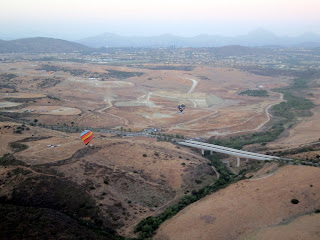 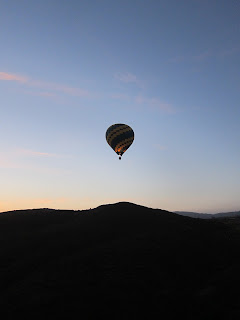 After covering six miles in an hour long flight, we descended slowly to cross low over the bridge on Camino Del Sur to approach the Cul de Sac landing site located in the graded landscape of a future housing development. As more and more open spaces disappear, Michael told us the balloons may run out of space to take off and land in the future. While he had briefed us on how to brace ourselves in case of a rough landing, we kissed down soft as a feather and one of the ground crew took our picture in the twilight as we remained in the basket until the envelope's hot air cooled enough for us to jump out. 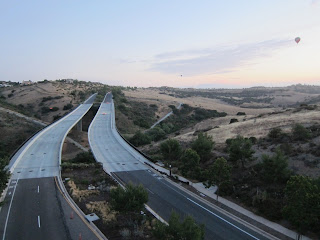 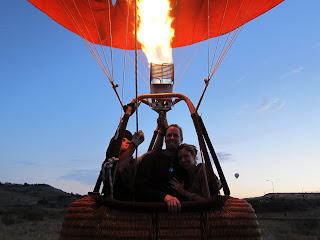 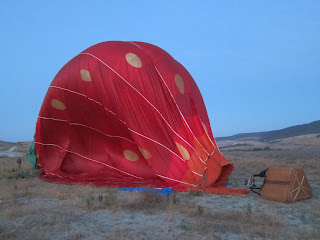 While we waited for the ground crew to pack up our balloon and basket, Tori and I snacked off the the vegetable platter and drank some Champagne. Michael explained the French origins behind champagne being traditionally served after a hot air balloon flight. Dropped off at our car by 9:00, we were able to make it back for our late dinner reservations at Le Papagayo to celebrate our new engagement. It was a wonderful experience and I will treasure it forever!
Posted by Noah Unsworth at 9:30 PM