I went to Las Vegas this week to meet up with my friends, Craig and Chris, who I met while traveling in Australia two years ago. Craig is South African but lives in New Zealand and Chris is from England. They had just flew down from Canada after spending time going across it by train to Vancouver. Our first night in Vegas we went to the new Cirque du Soleil show about the The Beatles called "Love" at The Mirage. It was the best live performance I have ever seen. It was a great mix of acrobatics and dancing. The countless ways the stage could transform was amazing. 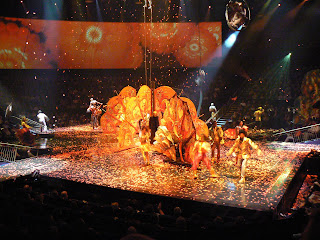 We stayed at the Bellagio with a nice room facing the fountains. We could watch the water spraying to the music on a special fountain channel on our room TV. I had the best accommodations of the three of us, a sleeping bag on the floor. I wanted to go with Craig to Monument Valley with a flight over the Grand Canyon but the tour was sold out so Chris and I cruised through the hotels on the Strip. I am always the most impressed with Caesar's Palace. I won a big jackpot on the slots at Luxor! Too bad it was just the Penny Slots!! We hung out around the pools at Bellagio on Wednesday relaxing. 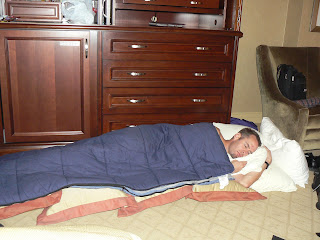 I have always wanted to go to the Fremont Street Experience while in Vegas, but I have never had the chance in the past. Wednesday night, we took the monorail and a public bus to reach downtown and we got there right before the first show of the lighted ceiling. It was very impressive and the sound system was powerful. The street was full of street artists, musicians and performers. Watching a guy make colorful portraits with spray paint was pretty interesting but the coolest was a gymnast who would balance on a pole held between two strong-looking guys. She would be thrown up into the air, doing twists and turns before landing back on the pole with her feet and she never lost her balance. I liked the vibe here. Very relaxed. 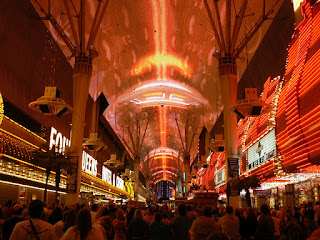 The last time in Vegas when I went to the Stratosphere, we weren't able to go up to the top of the tower due to high winds. So it was nice to go up this time and see the whole city landscape at night. The Strip was brightly lit and colorful to look at from this height. We went on two of the rides at the top of the tower. The Big Shot which catapulted us straight up into the air and free-falls back down. I have been on this type of ride before but never up at 1,000 feet which makes it intense. We then went on the scariest ride I have ever been on in my life, the X-Scream. It sits on a pivoting track that tilts out over the side of the tower as you slide quickly down the rail about 30 feet before coming to a sudden stop. I don't know why I sat in the front row with Craig, hanging out over the city streets with just a lap restraint. My palms were sweating and my knees shaking as I got off of this one. It was worse than skydiving. 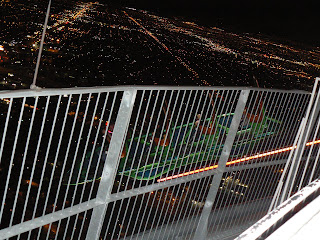 Chris flew back to San Diego with me to stay at my house until he flew home to England on Sunday. Craig was on his way to Orlando before flying home. I showed Chris around town, Point Loma, La Jolla, Pacific Beach and down to the Gaslamp Quarter in Downtown where we had dinner and went inside the Haunted Hotel. 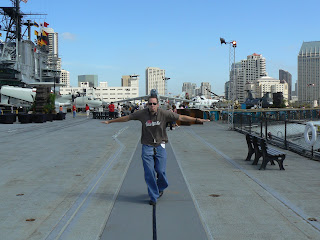 On Saturday, Chris and I went down to the USS Midway in the San Diego Harbor and then over to Sea World. The audio tour of the USS Midway is very informative and the aircraft carrier is huge. I have been wanting to come visit it for a couple of years now. I always enjoy the shows at Sea World. 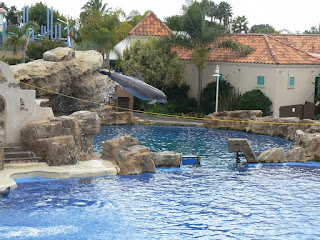 Posted by Noah Unsworth at 8:31 PM No comments: 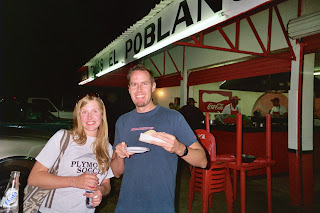 I went camping down in Mexico this weekend with Kurt, Dave, Joe & Suzie. We drove down Friday night to the town of Erendira in Baja California. It is a 4 hour drive from San Diego and about 60 miles south of Ensenada winding through the small mountains. We didn't get to Coyote Cal's until midnight but we stayed up til 3am drinking beers after we set up our tents. 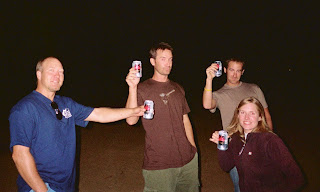 Saturday morning, we drove south down the coastal dirt road to an ancient volcano vent where the lava had flowed into the ocean. There were nice tide pools and little waterfalls caused by the high tide pouring over the reef. In one narrow channel of the reef, waves were powering through and funneling up the beach. It was fun to watch the bigger set waves crash through. Further down the beach in the distance, we could see a large spout of water repeatedly shooting high in the air so we decided to go check it out. 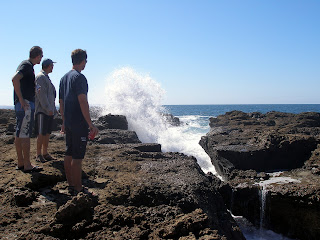 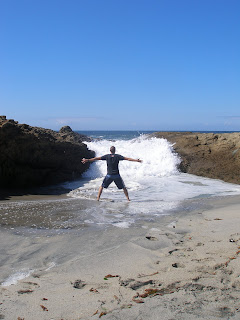 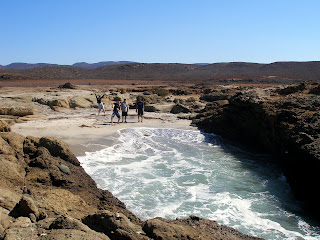 It was blowhole formed in the reef about 50 feet from the ocean. A warning spray of mist from the hole would be followed by an explosion of water of varying sizes between a waist-high gout of water to a pillar of spray high over our heads. It sprayed water at regular intervals and we could stand right next to it or jump over it. A group of dirt bikers came up to check out the blowhole and one got soaked as he was posing for a picture. The picture was pretty cool as it looked like a still from a Jerry Bruckheimer film of the hero trying to out jump an explosion right behind him. 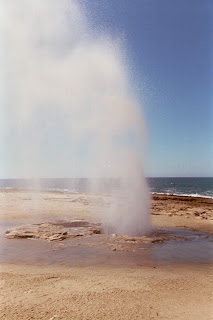 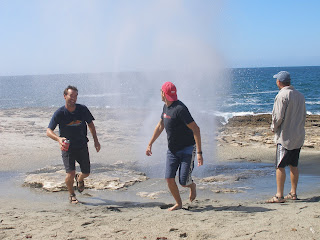 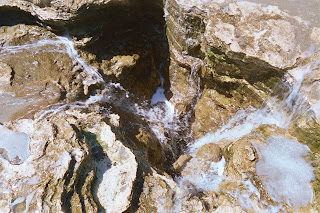 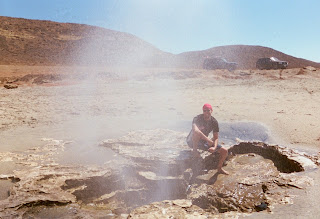 We then drove north to Long Beach to go surfing. It is a nice sandy beach with lots of dunes but it was pretty windy. Kurt and Suzie took naps on the warm sand while Dave, Joe & I went out in the water. It was small but I caught a few long waves. The water is much colder down here because the warmer currents bypass this area and the colder water rises up from the ocean depths. Afterwards, we drove down to a secluded cove that blocked the wind to hang out for the rest of the day, eating sandwiches, tossing a Frisbee, and relaxing. 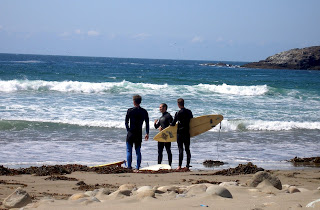 Saturday night, Suzie made an amazing dinner at our campfire on the beach. She took pieces of chicken and vegetables and sealed them with a little white wine in aluminum foil packets. She set the packs directly on the hot coals for 30 minutes and they came out perfect and steaming. The chicken was very tender and the vegetables were delicious. 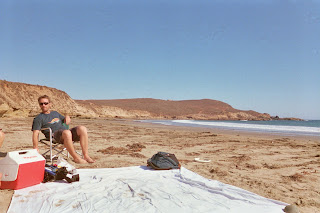 On Sunday, I stayed at the camp while the rest went out fishing on a boat. I would have liked to go, but I get seasick like crazy on those little boats bobbing out on the ocean. They caught a lot of fish while I hiked out to the rocky point full of pelicans and sea lions and then walked down the beach to check out the "Vortex". It is a natural formation of swirling concentric circles set in the stone face of the beach cliff. 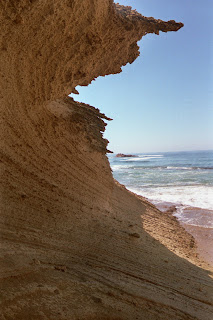 The drive home in the afternoon was the only bummer of the trip. It started out with hearing the sports score updates for the Padres & Chargers while we drove north. The Padres had lost the last two games to force a one game playoff in order to clinch the Wild Card and the Chargers blew a 16-6 half time lead to lose the game against Kansas City. The border crossing wait is always a nuisance but our two cars got separated due to the heavy traffic. Dave and I were waved through to the main border crossing but Joe, Suzie & Kurt who were behind us got diverted by the Mexican Police to the Otay crossing. They ended up getting home 2 1/2 hours after we did.
Posted by Noah Unsworth at 8:31 PM No comments: