Anna took me to Disneyland on Tuesday for my birthday. It was my first time back since 1988 when I was 16 years old. I was eager to see the new rides like Splash Mountain and Indiana Jones Adventure that I had never experienced. After a stormy and rainy Monday, the clouds cleared and we were greeted with blue skies as we drove up to Anaheim in the early morning. 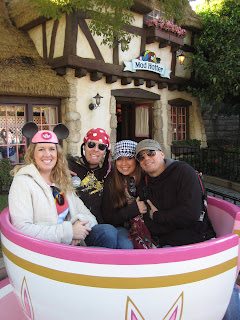 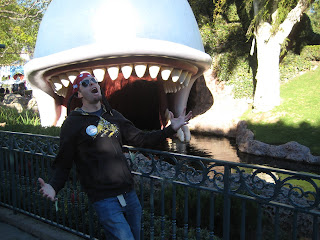 We arrived at 9am when the park opened and Anna made sure I got a Birthday pin. (Eliciting "Happy Birthdays" thoughout the park for the rest of the day, including the birthday song from a couple kids in line.) Meeting up with Katharine & Abraham on Main Street, U.S.A., we went straight to the Mad Hatter in Fantasyland where Anna bought me a hat. After trying on several different looks, I ended up getting a pirate bandanna with gold-ringed Goofy ears. 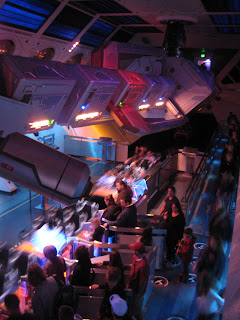 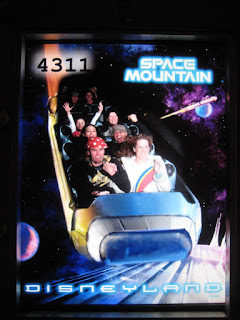 My favorite Disneyland ride has always been Space Mountain in Tomorrowland, so we went there first. We were in line for less than ten minutes before we were rocketing through the star-filled blackness on one of the world's most unique roller coasters. After seeing Michael Jackson's "This is It!" concert film on DVD recently, it was great to see the Captain EO Tribute when he was still in his prime. I am glad they brought it back. I really appreciated the Submarine Voyage, updated with one of my favorite Pixar movies, "Finding Nemo". 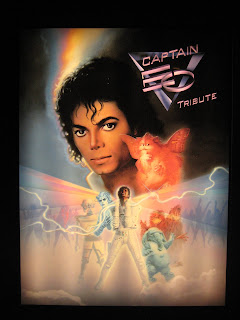 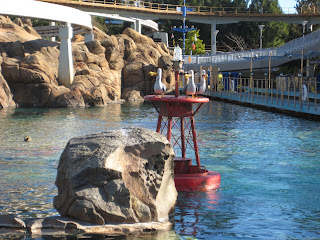 Before lunch, we went over to the New Orleans Square to ride the Pirates of the Caribbean. It looked pretty much the same way I remembered it except for a few Jack Sparrows added in. Since it wasn't a crowded day, Anna and I were able to eat at the Blue Bayou without reservations. It is one of the nicest places to eat with the dining area inside the Pirates ride, all lit with hanging lanterns. The gumbo was very good. Katherine and Abraham were luckier, they had a special invite to eat at the very exclusive Club 33, hidden on the second floor of the Square's buildings. Since we finished eating before them, we went up Tarzan's Treehouse for a great view of the park and took the boat on the Jungle Cruise. When we came back to meet up with them, they were hanging out on the club's private balcony. 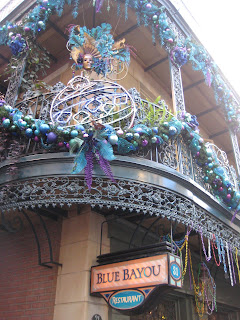 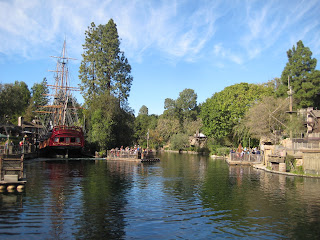 We picked up a Fastpass for the Indiana Jones Adventure before heading over to Splash Mountain. I was hesitant to ride it because it was a very cold day, but I survived with only a minor wetting. Anna got nice and soaked, sitting in front of me on the final big drop. Coming back to Indiana Jones, we got on the ride quick with our Fastpass. I dug the interactive features in the line, like the descending spikes. They should have more of them. It was a cool ride. Driving through the rat line was freaky and the rolling stone scare was excellent. Anna told me it is the only ride with real fire effects in Disneyland. 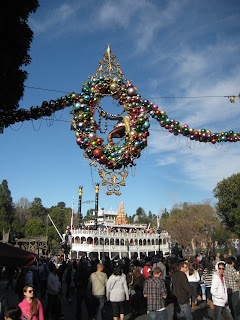 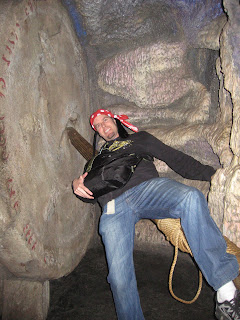 When Katharine and Abraham left for the California Adventure Park, Anna and I headed over to Toon Town. I enjoyed the crazy architecture before riding the Roger Rabbit Car Toon ride. Before returning to Tomorrowland, we went on the iconic "It's a Small World", always disappointing but such a great target for parody. Tomorrowland at twilight was a pretty sight, with the sun setting behind the retro spire of the swirling Astro Orbitor. We helped Buzz Lightyear defeat Evil Emperor Zurg on the laser-shooting Astro Blasters ride. Despite a little cheating by Anna (Ha!) I still managed to pull off the win, 53,400 to 20,000. 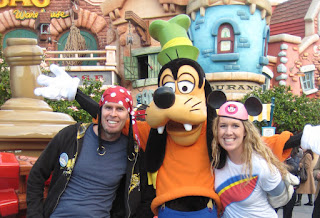 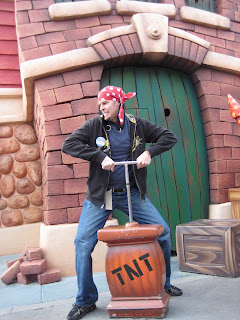 My first reaction when I entered the park was that the Sleeping Beauty Castle looked small and unimpressive and they should rebuild it to much larger proportions. But at night, it is beautifully lit and I discovered it's the perfect size for photographs. All day we had short lines, never waiting more than fifteen minutes until reaching the Big Thunder Mountain Railroad in Frontierland. They were having technical issues causing both lines to slowly merge into one at the loading area. It was worth it. I had forgotten how good a roller coaster it is, a real thriller, fast and smooth. I wanted to go again! 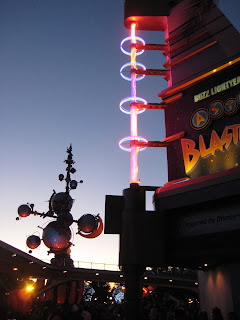 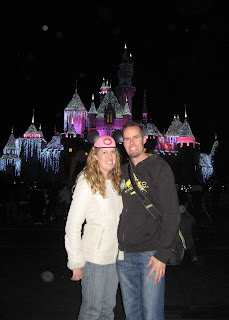 Because the Thunder Mountain line took longer than expected, we had to skip the Matterhorn Bobsleds, the only major ride I missed out on the day. We used a pair of gifted Fastpasses to go on the Indiana Jones ride one more time before the park closed at 8pm. Meeting up with Katharine and Abraham outside at the Disney Store, Abraham suggested we drive up to Portillo's in nearby Buena Park. It was a great idea, their Italian Beef sandwich and chili was delicious. I definitely want to go back there the next time I am in Orange County. 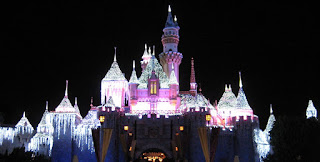 p.s. Anna made it the perfect birthday with her Magic Bag, filled with snacks, presents and fun stuff to amuse us in line.

Posted by Noah Unsworth at 11:23 PM No comments:

Even though I have driven/biked/walked past the Self-Realization Fellowship in Encinitas my entire life, I have never been inside to the Meditation Gardens. On New Year's Eve, Anna took me to the cliffside gardens overlooking Swami's Beach. Lush paths wound between Koi ponds, waterfalls and tiny nooks filled with benches. The oddest site is the empty swimming pool sitting right at the edge of bluff. It was a beautiful sunny day. 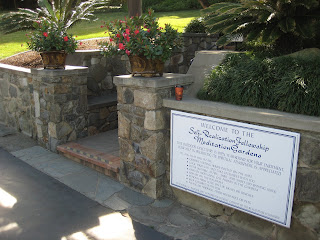 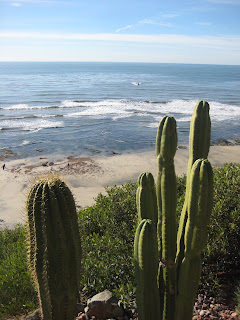 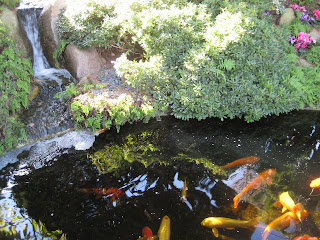 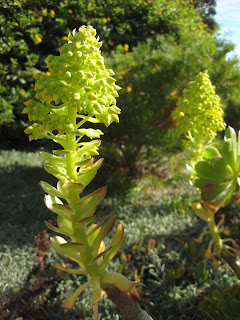 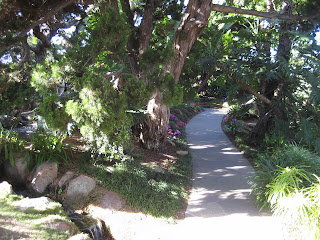 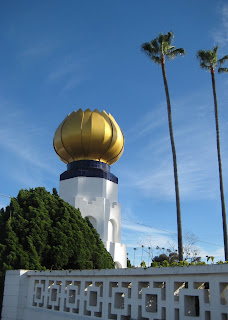 After leaving the Meditation Gardens, we ate lunch at Swami's Cafe and went for a hike through the San Elijo Lagoon. The recent rains flooded the center path in two places. We took off our shoes and waded across the ankle deep water. It was bearable at first, but the freezing pain hit halfway across. 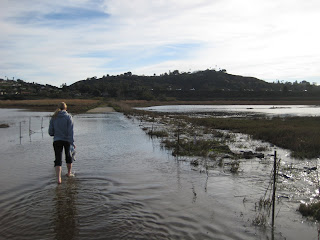 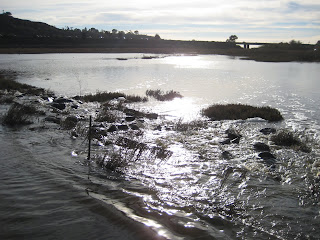 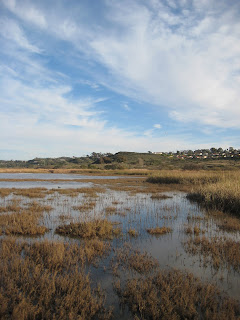 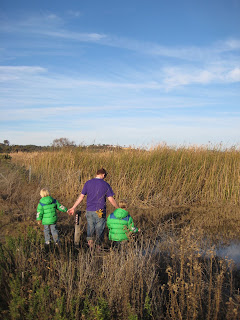 It took about two hours to circle the lagoon's main path. From the border of Solana Beach, we walked back along the beach to Cardiff-by-the-Sea. It was nice that the last day of 2010 ended with a pretty sunset. Back at Anna's house, we had a nice dinner party with fifteen people and loud firecrackers at midnight to bring in the New Year. 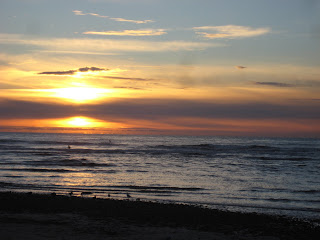 Posted by Noah Unsworth at 10:54 PM No comments: