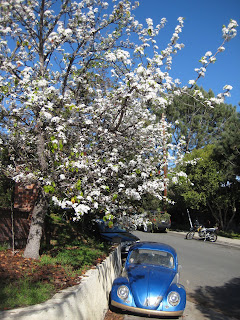 I have always loved the three Pear Trees along my driveway that blossom in January for a few weeks. I finally pulled my camera out to take a couple photos before the flowers disappear for another year. 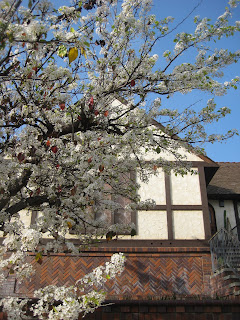 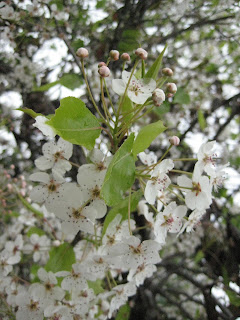 Update: 2/13/13
The white flowers were glowing from the porch light when I came home tonight so I took this picture with a 5 second exposure to try and capture the effect. 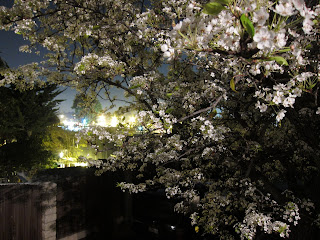 Email ThisBlogThis!Share to TwitterShare to FacebookShare to Pinterest
Labels: California

After my successful New Year's Resolution last year that motivated me to write five chapters and finish Part II, I made a new one this year. It is not as big, but I need to finish a thorough edit of the prologue and first thirteen chapters of Part I & II and write at least two new Chapters in Part III by the end of the year. One each for my two main characters, Jâk and Keefer. This will set me up to finish the last 5 chapters of Part III in 2011.

After spending the first seven months editing, I've finished writing the rough draft of Chapter 14. It's great to be officially past the half-way point of my book. I need to write one more chapter this year to fulfill my goal. I want to be completed before December so I can spend time re-writing Chapter 8. I'm going to change a supporting character who will be showing up later in Part III and make some radical alterations to two scenes.

Chapter 15 is finished, completing my New Year's Resolution for 2010. It is a couple pages shorter than my usual chapter length but I think it perfectly sets the scene for Keefer's story arc in Part III. I am now ready to tackle the problems within Chapter 8 in December.

I finished re-writing Chapter 8 with a day to spare in December. I think it is so much better now. Now I am ready to start a new New Year's Resolution to write five chapters in 2011 to complete Part III.

I found I have two writing modes.
1.) The Fun Way - I have a spark of an idea for the chapter I'm working on and start writing to get it on paper in a rush of words. When I am really lucky, each idea triggers another and I end up going two or three pages before they dry up.
2.) The Hard Way - I try to finish my page quota for the week based on my general chapter outline. I struggle through paragraph after paragraph, sometimes counting every sentence as I grind out the story-line. If I’m lucky, this will trigger #1.

Chapter 16 is finished, the first new chapter of 2011. This was an important section that I had outlined in great detail a long time ago. I had originally planned for these events to occur earlier in the book, but I ended up pushing them back along the storyline. Even though I knew all the details, getting them all to flow together in a cohesive way was a bit of a challenge.

The hardest part about writing is the motivation right at the beginning of a session. My brain tries to fake tiredness just before I start, but I have found the cure, Red Bull. It’s the ultimate writing juice. A few sips and I am clicking away at the keys.

I really struggled with Chapter 17, but the rough draft is finished. After I wrote the first two sections, I changed my mind and flip-flopped them. It works better but I had to do a lot of editing to massage the new order. The third and final section also caused problems. After writing half of it, I realized that it didn't belong in this chapter and I had to start again from scratch, but it came out great.

Chapter 18 is finally finished. I meant to have this chapter done at the end of July before my three week trip to Europe, but I was still 2 pages short when I left. I was delayed further when I had to spend so much time editing the 5,000 pictures from my trip when I got back. I now only have two more months left in the year, not enough time to write the last two chapters of Part III like I planned. I will have to be content with just finishing 19 and starting 20 at the beginning of the year. That will eat into some of the editing time I have planned for 2012 before I start Part IV.

The first draft of Chapter 19 is written, a couple days before my ski trip to Vail on Friday. It is nice to get it out of the way. I meant to have it done by the end of 2011, but this chapter ended up having almost twice as many pages as my other chapters. This chapter is pretty rough as I normally concentrate on getting a logical story-line onto the page in the first draft. During editing, I will work on the flow and use one of my favorite writing techniques, adding in successive layers of detail each revision to build depth.

The last few pages of Chapter 20 took longer than I expected, but I have finished the rough draft. (With the end in sight, I let my two new pages a week rule slip a bit!) Part III is now complete, only six months behind schedule. My book is now at 405 pages with almost 130,000 words. I had planned to have 2012 set aside for editing Part III and writing the first two chapters of Part IV. I still might pull it off if I can finish my rewrites by the end of August, but I doubt it. I am willing to push Part IV to next year if needed.

I have completed my editing of Part III and now I am ready to write the last section of my story starting in 2013. I also went back and edited Parts I and II as well, incorporating new ideas I developed while writing Chapters 14 through 20. Tori has also been reading my draft and based on some of her suggestions, I went back and modified details about Chase's character in Part 1. My book now stands at 424 pages.
Posted by Noah Unsworth at 7:59 PM No comments: