I have always wanted to go to a Chili Cook-Off Contest. Whenever I read about them or see them on television, I get an intense craving for chili. When I heard about the 1st Annual Chili Cook-Off at the Lakeside Rodeo grounds on the radio, I just had to go today. 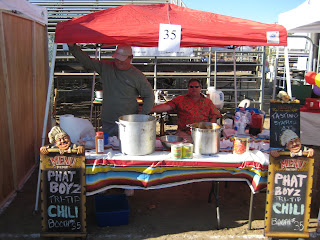 I wanted to get to the Cook-Off before the tasting began at 1:30, but I arrived about 40 minutes after that. They had 50 contestant booths and 4 out of 5 ran out of chili within the first half hour. I hurried from booth to booth and was able to try six different types as they were running out all around me. Two of them were great, three were just average and one was so spicy that I couldn't finish it. It was more the taste than the heat that I couldn't take. 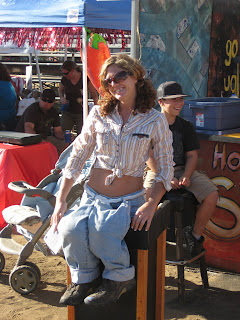 My favorite chili was from the Phat Boyz Tri-Tip Chili Booth #35. I was talking to the two cooks after I voted for them and they told me the reason they lasted longer than most of the others was that they made twenty gallons of chili instead of just the minimum two gallons. I think if they do this again next year, they will have to increase the minimum amount for all the contestants or I will have to arrive much earlier. 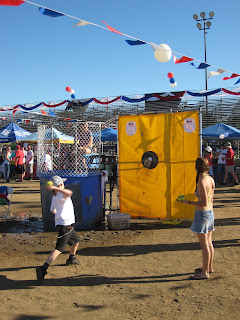 Booth #42 ended up winning the People's Choice Award, but I didn't get a chance to taste their chili. Good thing I was able to buy some nachos or I would have been still hungry after all the booths ran out. The DSC Morning Show from 101 KGB was there as well. It was nice to see in person the people I listen to every morning on the way to work.
Posted by Noah Unsworth at 8:35 PM No comments: