I jumped out of an airplane yesterday at 3,000 feet. It was a static-line jump where you jump out of the plane by yourself and a cord that is attached to the plane pulls the chute open as you fall away. Kinda like the parachute jumpers you see in World War II movies. 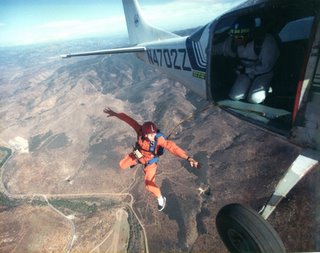 I went down to the San Diego Air Sports Center in Otay Mesa with Jeremy, Scott and Greg. It was Scott's Birthday, so Jeremy and I decided to go jump with him.

It was a long, stressful, but exciting day. We got there early and had to sit in a class that lasted till around 2pm as we learned all the ways to fix a problem if the main chute has a problem opening or how to release it and pull the reserve if all else fails. We also learned how to correctly jump out the door of a mock-up plane and they taught us how to steer the parachute and come in for a safe landing.

The worst part of the day was the long wait at the picnic tables after the class listening for the loudspeaker to call our names to suit up and board the plane. It felt like we were waiting for our turn before the firing squad. My stomach was doing flips. We tried to stay calm by watching the small planes taking off on the dirt airstrip, trying to spot early jumpers as their chutes opened high above us.

When they finally called our names we went over to the equipment shed to get our jumpsuits, helmets, altimeter, 2-way radio & most importantly, our parachute. Mine was #11. We tried to steel our nerves as the small Cessna landed and our jumpmaster rushed us out to load us onto the small plane. Since I was the lightest, I would be jumping last and I was squeezed into the small place on the floor where the co-pilots seat should have been. My view for the rest of the flight was the steering wheel in my face unless I looked back out the open door.

Beside the jumpmaster and the pilot, there were four of us jumpers crammed into the rickety little plane with lots of duct tape holding things together in the interior. I started to get a little airsick as the plane gained altitude, but it might have been just fear. The first jumper had done this before and was pretty calm but it was still shocking one moment seeing someone sitting in the doorway behind me and the next he is gone with a bang as the metal clip on the end of his cord hit the bottom of the plane.

Scott was next and I can still vividly see the look on his face as he yelled, "Oh Shiiiit" as he dropped out of view below the door. The plane would circle around between each drop to get back into position. Jeremy was next and then he too was gone. Then it was my turn. Strangely, all my fear left me as the jumpmaster shouted, "Next" and I maneuvered around the small plane to get closer to him. I felt like I was on automatic pilot as he hooked the static-line to my parachute and patted me on the shoulder to signify that I was ready to hang my feet out the door and prepare to jump.

I had to fight the strong wind as I held onto both sides of the door frame with my hands and hung my feet out the door. I edged out until my butt was barely on the edge of the frame and waited. The jumpmaster shouted, "Jump!" and I threw myself out into the sky. My adrenaline must have been in overdrive because my vision went black and the next thing I remember was the loud pop as my chute opened with a strong jerk.

It took a second for me to regain my senses, but then I remembered to look up and check out the condition of my parachute and reach for the two handles above my head. I lucked out, my chute had opened perfectly with no line twist or end-cell closure to fix. I was then free to enjoy the scenery and steer the parachute back and forth by pulling on the handles while frequently checking my altimeter. I tried a sharp spin by pulling on one handle until I was almost horizontal with my chute on the third rotation.

Around 1,000 feet, I started to follow the treeline alongside the airstrip and look for the man on the ground with the big arrow who would guide all of us first-timers into the landing area. He led me along the trees and then turned me around for the final approach into the field. My parachute was designed to descend around 14 miles per hour but if you pull both handles at once you can brake and slow down for a much softer landing. Another man was holding paddles at the landing spot to indicate when to brake for the landing. I looked at the wind sock and watched the guy's paddles carefully as I neared the ground. I braked hard right before the ground but was surprised at how hard I hit as I rolled onto my side to absorb the impact. I didn't feel that I was going that fast.

I gathered up my parachute and carried it across the field with a huge smile on my face to meet up with my friends and take off and turn in my gear. Scott, Jeremy and I were all on an adrenaline high for awhile afterwards reliving our experience and describing it to Greg who had watched from the ground. By the time I got home last night, I was mentally exhausted and ended up going to sleep early. I was burnt out.
Posted by Noah Unsworth at 8:31 PM