Scott got married on Sunday, but last weekend was the more important experience, the bachelor party. We decided to go all out and make it a four day bachelor trip to Laughlin as well. The festivities started off in the early afternoon at the house of Jeremy's friend, Benji, for a party that all our friends could attend who wouldn't be able to make the trip. I won't go into the details of the party's activities, but I saw some amazing stuff. Afterwards, we headed out to Laughlin. Scott drove with his best man, Chad, who had flown in from Mississippi and I drove with Jeremy and the two Gregs in the mini-van we had rented. 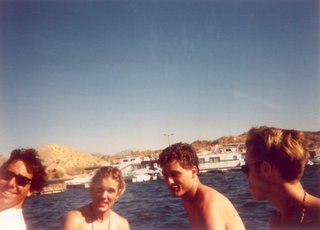 It was very hot in Laughlin when we arrived late Friday evening. To help our wallets, we had planned to camp instead of getting rooms at a hotel. We set up our tents at the Lake Mohave campgrounds and tried to get to sleep. I think I was the only one who was able to fall asleep in the heat and everyone was tired and grumpy in the morning. We tried moving our campsite out onto a sand dune on the lake after picking up our reserved speedboat, but it was pretty miserable because a strong wind kept blowing sand all over our stuff. Chad decided that he couldn't take another night in a tent so we all drove into Laughlin hoping to find a room on a busy July 4th weekend. We lucked out at the Flamingo Hilton where they were able to give us their last available room. We didn't tell them that there would be six of us in the small room. 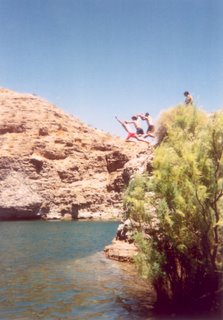 Now that we were all in a good mood again, we went back to Lake Mohave. Cruising a long way up the lake we found a nice inlet with calmer waters where we could practice our kneeboarding. After everyone had enough tries, we anchored the boat further back in the cove where we did some swimming, snorkeling and found a fun rock to jump off of into the water. After a couple of leaps into the water, Jeremy realized that he had left the keys to the van in his pocket and now they were at the bottom of the lake. We spent a few minutes trying to find them before deciding to head back to find a locksmith, but the boat wouldn't start no matter what we tried. After waiting more than a hour for help, we ended up getting the boat to start. We sped back to the marina and were able to get to the locksmiths fifteen minutes before it closed up for the weekend. That was close. 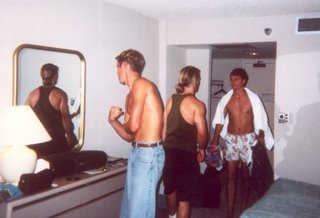 The great thing we found out about Laughlin is it's dual nature. You get the outdoor fun of Lake Mohave combined with a mini-Las Vegas. Laughlin's hotel casinos are located right alongside the Colorado River, just south of the Davis Dam which holds Lake Mohave. One of the fun things to do is walk along the river boardwalk that links all the hotels from the Flamingo Hilton to the Golden Nugget. Much nicer than walking the Las Vegas Strip. We all had a good laugh when Jeremy walked into a wall right as he was giving a smart aleck remark to some kid. 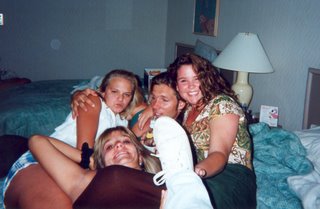 Sunday, July 4th started out auspiciously when we got up later than we wanted and headed out to the lake. We had the music blasting and Greg had just lit up a joint in the back seat of the van when we were pulled over for speeding. We were franticly rolling down the windows and sliding open the side door of the van as the cop walked up to us. It was pretty pathetic attempt to clear the air and the cop probably smelled it anyway. After each of us had given a nervous sounding "No?" to his direct question about whether we had been smoking, he gave us a stern lecture and let us off with a warning. No speeding ticket either. Turns out he was leaving the next day for a vacation to Hawaii and didn't feel like doing the paperwork if he took us in to the station. Whew! 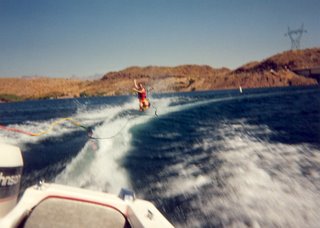 Glad to be on the lake and not in jail, we kept the boat near the top of Davis Dam and had fun mooning a few of the passing cars. The water was much colder there, creating a sharp contrast with the scorching heat. Our beers quickly got warm which was bad but the Zimas ended up tasting better warm. We drank a lot on this trip (never leaving our hotel room without a beer in each hand), but strangely we never got drunk. Maybe it was the heat. In the water, I was getting pretty good on the kneeboard, but when I tried to copy Jeremy's 360 spin I ended up wiping out pretty spectacularly. It would have been funny, but I pulled a muscle in my back and the pain still hasn't gone away. It was getting pretty dark when we were heading back to the marina. We got stopped by the rangers, but they let us off with just a warning for being out too late on the lake.

We had so many things start to go wrong on this trip but miraculously turn out okay that we started to count them. The seventh and last one was pretty cool. On our last day we were pretty low on cash. We had enough money to either pay for the gasoline to fill up the speedboat so we could return it or fill up our cars for the long drive back home but not both. As we were debating what we should do in the lobby of the Hilton, Greg played the last three quarters in his pocket into a slot machine. He won one quarter. Dropping in the last quarter, he hit triple sevens and won $175 dollars. Now flush with cash, we were able to fill the boat and our cars to make it home. Since we were starving, we were able to have a nice meal as well.
Posted by Noah Unsworth at 12:09 AM

Email ThisBlogThis!Share to TwitterShare to FacebookShare to Pinterest
Labels: Travel