After several months of training, I climbed up into the catch trap and caught my first trapeze class today. While I have caught Tori several times during my practices, I was a bit nervous since this was my first time catching beginning flyers. Each flyer gets two attempts at getting caught per class and I had just enough endurance to catch all of their first attempts before Tori tagged in and caught everybody's second turn. Over the next few classes I will work on increasing my strength until I can catch an entire class. 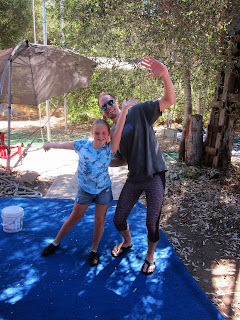 The knee hang is the first trick a beginning flyer learns, hanging from the bar by their knees with arms outstretched so the catcher can grab their wrists. After catching a couple of knee hangs, I had my first ever attempt at catching a release trick, a Full Twisting Straight Jump from Veronica. The adrenaline must have been pumping because I wasn't nervous at all. On the front end of her first swing, I saw her release and twist as I swung up to meet her. I extended my arms but only snagged her hands instead of wrists so I let her drop to the net. So close! 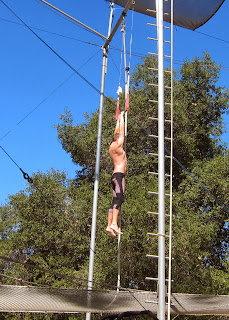 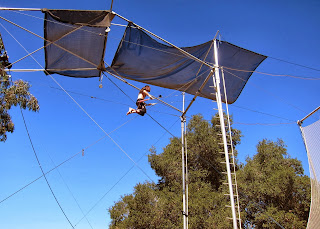 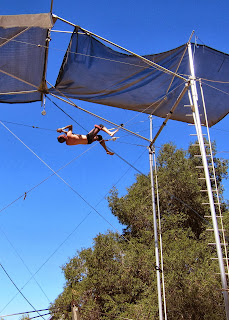 In my second class, I got anther attempt at catching a release trick. It was a small class of only four so I was determined to complete all the catches. (2 each) After catching a knee hang, Misty attempted her Planche, but the timing was off. I was already going away by the time she released and extended her arms. On her second try, the timing was perfect and I caught her with no problem. On my last Knee Hang Catch of the day, the flyer kicked his legs hard while in hands, banging the bar into my legs. My lower quads are very sore and I now have a big ol' bruise. 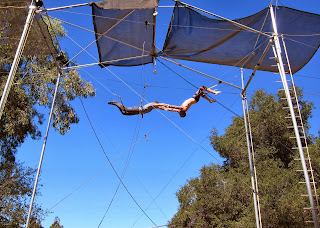 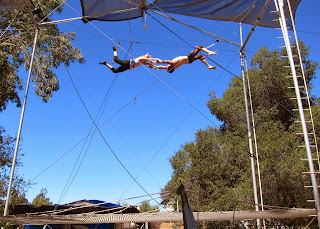 A trick-filled catching day. For my third class in the catch trap, I caught two Layouts, two Knee-Hangs, a Planche and a Splits. I also had a chance at two more tricks, fending off Mark's feet in his Forward Over and the twisty belt's metal ring in Veronica's Full Twisting Straight Jump. 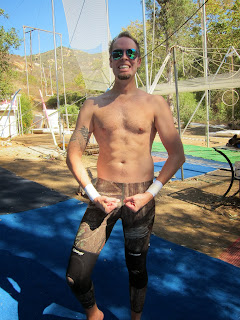 In my forth class, I tried to work on smoothing out my technique while getting into the lock. It was my longest time on the catch bar yet, performing eleven locks and catching six. One of them was Lindsay's Hocks Off. ("Light as a feather!") I'm so tall that her toes brushed the net while in hands. Lots of laughs with that one.

I also dropped my first flyer into the apron, the high-sided rear net. Our grip was just too slippery. I think it was a combination of the flyer not gripping back on my wrists and my forearms growing weak from gripping the bar too hard while concentrating on my improved lock technique. I ended the class catching Celeste's layout. I am really surprised we pulled it off. I had to reach far down and grab her wrists from the sides.

Not all catches are smooth. When a flyer releases early, they turn into a missile traveling straight for the catcher's head.

After a few weeks off, I was back catching after Tori cut her finger and needed me to cover for her on Saturday. I caught Veronica's Half Time Straight Jump for the first time and worked in hands. Dave said it was my best catch yet. I wish I had a video of it.

As the rain cleared on a Thanksgiving weekend, we worked the board under blue skies and scattered clouds. I have gotten quite good at retrieving the bar between flyers with the long hook called a noodle. 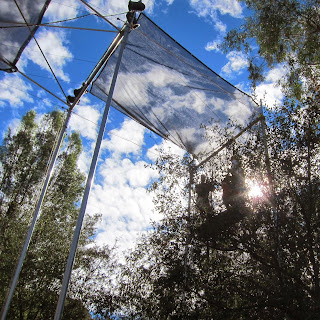 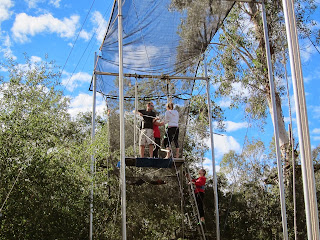 Catching in the noon class, I started calling timing for the first time, yelling "Ready" and "Hep" to alert the flyers when to leave the board. So far, I only know it for the tricks that have the same timing as a Knee Hang. 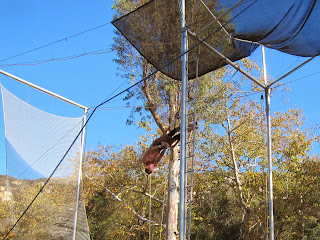 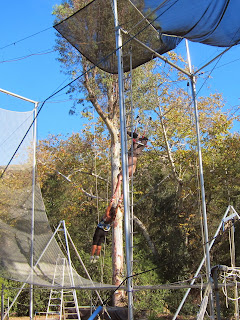 My endurance and technique has improved enough that I finally caught an entire full class for the first time today without another catcher having to tag in. I also received my first catcher wound when a small girl torpedoed her head into my chin. I tried to fend her off as I ducked but she still smacked me.

While Tori was away on a business trip, I filled in for her on the Catch Trap for the first time. With the new slow motion feature on my iPhone 5s, I have video of me catching the Knee Hang, Splits, Layout and Planche. Here are three below. I am starting to learn the timing enough to call the Flyer off the board for some of the tricks.

Another good day. My brother, Jordan, came out for Trapeze for the first time and I caught his Knee Hang. I also finally caught Betty's Layout for the 1st time. We had been trying for several weeks and always came close.

My biggest class yet, 14 catches out of 16 attempts including Kenny at the end for my first out-of-lines catch. Oof, he was heavy!

Today I finally caught two trapeze classes on the same day. I was worn out and my mouth was bone-dry at the end, but I pulled it off. Tori has caught three classes in a day but that is when she was working the rig full time.

Susan Watson was visiting from the rig in Colorado and wanted to throw me her Pump Shoot trick today. Since I had never caught it before, I was a little nervous of what I would see flying toward me in the catch trap. I felt more confident after I saw her pop into an uprise at the backend before swinging back toward me in my lock. I had called the timing slightly late, but I still caught her at the top as she launched upward off the bar. The video below is off our second catch with improved timing.

On Saturday, I caught a very pretty Layout from Chris. It took a few attempts for us to get the timing right and to match the height of my swing to the amplitude of his trick.