Chris and I went scuba diving for lobster in Solana Beach, CA this weekend. We had to go buy a lobster license at Big 5 Sporting Goods and then we headed down to Fletcher's Cove. 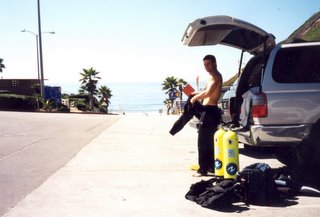 It was a beautiful sunny day so we were boiling hot in our wetsuits as we got our equipment ready. The water was freezing when we entered the ocean, but it was nice to cool off. We didn't have to go very far out as we were able to find lobster around twenty feet deep. 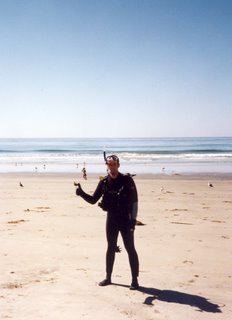 We had to look in the cracks of the reef to find them. Chris was great at spotting them in the dark crevices and fearless about sticking his hands in there to grab them out. They were fierce little buggers and fought hard to avoid getting put in his bag. A couple got away and took off over the ocean bottom really fast. I was surprised how fast they could go when they wanted too. I tried to grab one but missed it. 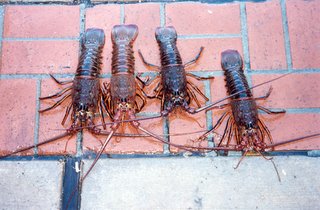 Chris had to check each lobster with his measuring tool to make sure they were over the limit before sticking them in his bag. We had to let two go because they were too small but we ended up with four nice ones that we cooked up in a big pot of boiling water.
Posted by Noah Unsworth at 8:35 PM