Christine Prowd and I just hiked to the summit of Mt. Whitney (located in the Southern Sierra Nevadas in California) at the end of September. It is the highest mountain in the lower 48 States at 14,497 feet (4,419 meters) 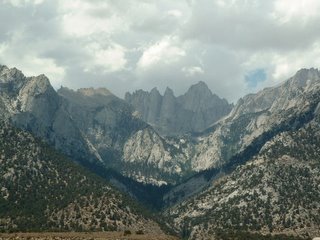 It was a 22-mile hike to the summit and back and it took us 15 hours, around 7 hours to get to the Summit and 8 to get back down. We had an overnight pass and we thought about splitting the hike in two and staying the night in a tent at Trail Camp but we decided it would be easier to pack lighter and do the whole hike in one day. I had a pair of hiking sticks but our backpacks were mostly filled with water bottles, food and a sweater. (I also included aspirin to fight altitude-induced headaches.) 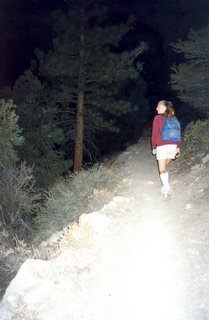 We stayed the night in Lone Pine down in the valley and got up early at 4am and drove up to the Trailhead that starts at 8,637 feet. It was interesting hiking in the dark with only our flashlights but the trail was well marked so we didn’t worry about getting lost. Because it was dark, the only memorable part of the first few miles was hopping from rock to rock over the small creeks that crossed the trail in several places. 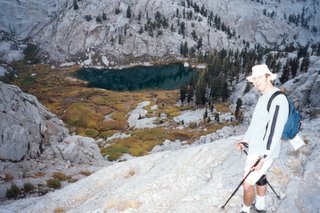 The sky started to lighten around the time we passed Outpost Camp after hiking almost 4 miles to 10,360 feet. The first real landmark we reached in the daylight was Mirror Lake. It’s a small still lake that the trail snaked around before climbing to leave the tree line behind. This is also where the trail started to get rockier, but it was well maintained and gave the appearance of a rocky staircase at times. 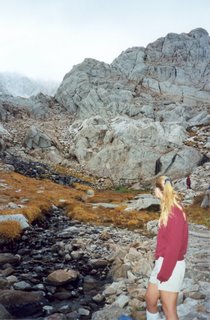 It was about a mile before we reached Trailside Meadow. It’s a pretty moss-filled meadow with a small stream running through the center of the little valley. We still felt strong a mile later when we reached Trail Camp at 12,039 feet. We took a short break and ate a snack before attempting the 99 Switchbacks that rose steeply up into the fog above the camping area. We checked out Consultation Lake and the other small pools around the camp before we continued on. 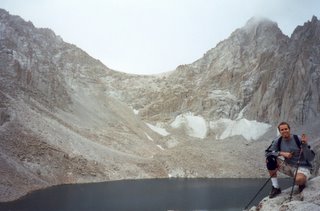 It started to lightly snow as we started up the 99 Switchbacks that lead up to the Trail Crest, but there was no wind and we were warm from our hiking so we didn’t worry about it. As we ascended the switchbacks, some people on the trail started to turn back as the snow fell heavier, especially at the Cables where the trail got steeper and a little icy. We had a quick talk about joining the others and turning around, but we still felt good and decided to push on. 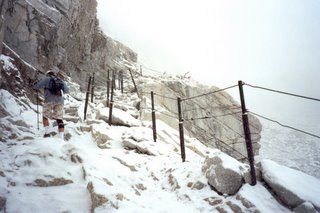 I actually enjoyed the “infamous” switchbacks that I had heard so much about. Hiking up the steep face as the valley spreads out below you gives a great sense of forward progress and accomplishment. We had to take occasional stops due to lightheadedness and to keep hydrated, but the views were great and we could sometimes make out the summit through the falling snow and fog to our right. I enjoyed the snowfall, it made me feel as if I was climbing Mt. Everest or some other snowy peak and it kept us cool. My boss had climbed Mt. Whitney last year and had complained about the heat from hiking under a blazing sun. 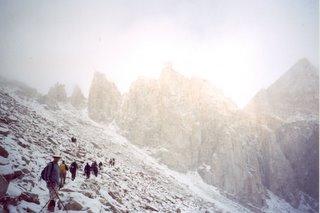 The temperature would soon change as we reached the Trail Crest at 13,777 feet after hiking 8.5 miles. As we reached the top, a brisk and cold wind that had been blocked by the mountain range hit us in the face as it blew eastward from the Sequoia National Park. While the wind was unwelcome as we stood on the border of the park, the view of the large valley spread out before us on the other side was amazing. It was a pretty severe drop off down to the Hitchcock and Guitar Lakes far below. 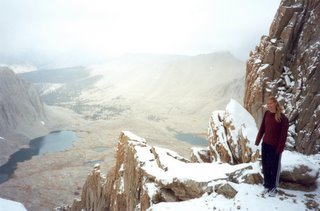 The trail descended down a bit before rising again as we hiked along the back ridge of Mount Muir toward the sharp needles. The trail was very icy and it was getting very cold. I started to wish that I had packed some pants. We were mostly concentrating on warm thoughts as we hiked this section but the trail got interesting as we reached the Needles. The icy trail narrowed in the “windows” between the needles with sheer drops on either side. If someone should happened to slip, it would be the quick way to get back down to Trail Camp which I could see far below in the gaps between the needle-like spires. 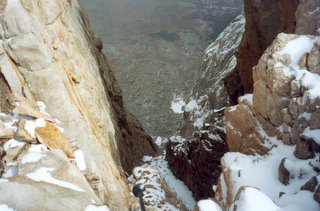 After the passing the needles we could finally see our destination, the tiny hut in the distance on top of the flat summit of Mount Whitney. It was about a mile of zigzagging up the back of this final peak but we finally made the top at 14,497.61 feet after 11 miles. It was a little anti-climatic because the peak was fogged in but it was nice to enter the stone hut and get out of the wind and chat with several other climbers inside. We stayed about an hour on the Summit resting, eating lunch and signing the register. I was very grateful when a fellow hiker gave me a knitted cap that he had bought in Peru to help me keep warm on the decent. 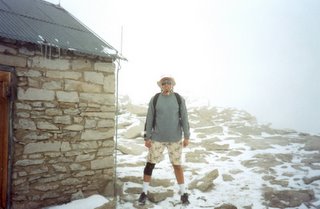 The descent was tough but mostly uneventful. The sun came out for a while after we crossed back over the Trail Crest and started to descend the switchbacks. We got our first clear view of the mountain range we had just crossed and had a chance to warm up again as we left the wind behind which boosted our energy levels. By the time we reached Trail Camp the clouds returned and snow started to fall once again. 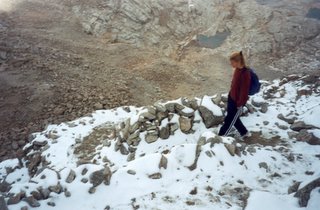 The last six miles of the descent was the toughest. The snow fell thicker and thicker until you could barely see out in front and my ski-injured knee was starting to ache. My hiking sticks really helped on the descent as I would step first with my good leg and lower the other taking some of the weight with my arms. (The next day my triceps were really sore from the amount of work.) The sun set as we reached the tree line again and passed Outpost Camp. 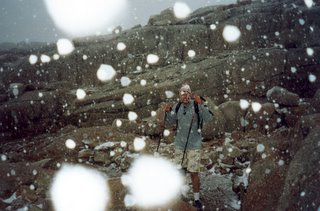 The rest of the way was mostly a blur as I daydreamed alternatively about the heater in my car, getting eaten by a bear or collapsing on the bed in our hotel room down in Lone Pine. The last mile seemed an eternity until we stumbled into the parking lot at the Trailhead around 8pm. 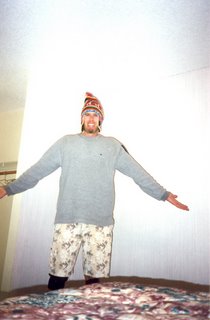