I went camping to the Colorado River last weekend with my boss, Blayne,Carrie and their children. Jeremy, Chelsea and Forest came out with me to the river for the first time as well. The camping grounds at Picacho State Park are named after Picacho Peak, a nearby ancient volcano. You can see the far-off volcanic peak from the river. 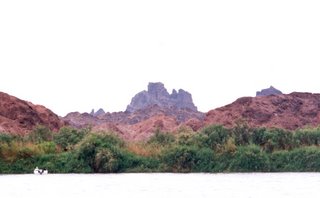 Jeremy learned how to wake-board on this trip. He was a fast learner and was able to get up pretty quick. We had a fun float down the river with a few rafts that we tied together. I had one of the worst back slaps in my life when I fell backward into the water trying to stand up on the rubber raft. Yowza! It really stung. 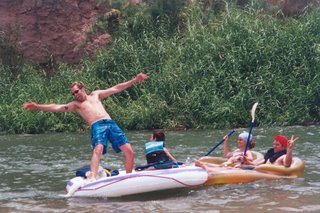 We did another night hike up to the natural rock arch in our flip-flops. Not so bad going up, but it can get a little slippery on the way down. It is only a small arch, but you can still see it from the river up on the hillside. Some nights we hike over to the graveyard to check out the old tombstones from the gold mining frontier days. 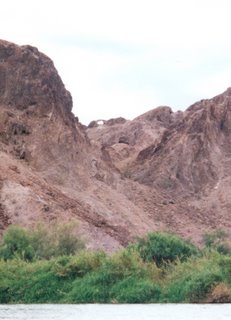 We also had two wave runners with us this trip. One of them was great, but the other had a balance problem and liked to tip over easily unless you could get it up to speed quickly. That was fairly easy with one person, but almost impossible with two people. 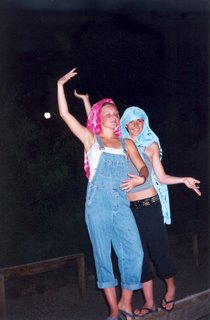 Casey and Corrin made some headwraps and started calling themselves "Queen" and "Princess". It was pretty funny to watch them messing around, balancing on the wooden rail.
Posted by Noah Unsworth at 5:34 PM

Email ThisBlogThis!Share to TwitterShare to FacebookShare to Pinterest
Labels: Camping