Cactus Stock was a blast! Rosie had a gig with the band, Skanic, as one of their back-up singers so I went with her and Jeff down to Mexico for Cactus Stock. It is held south of Ensenada in Baja California about 20 minutes from La Bufadora (The Blowhole). 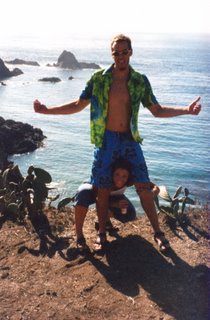 There is a windy dirt road the last few miles with some shear drops and sharp turns as you cross over the rocky ridge to get down to the Kennedy Ranch. It was very scenic spot with jagged cliffs rising out of the ocean and the weather was perfect. We set up our tents and joined the party. 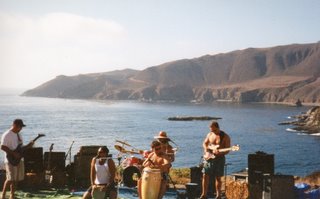 A few bands were playing on the cliff stage with people hanging out or going into the ocean. I went ocean kayaking with Jeff, but I lost my favorite pair of sunglasses when we capsized while catching a wave into the beach. Bummer! At sunset, we all hiked up to Crow's Point with the rest of the crowd to cheer as the sun dropped below the horizon. 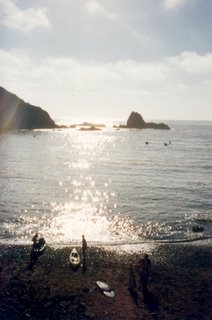 At Crow's Point, I met a cute girl named Liza who I hung out with for the rest of the night after she invited me to have some dinner at her friends' campsite. After a while the bonfire started and more bands started playing on the main stage. Everyone started to gather around the fire and on the dance floor. 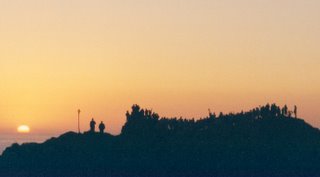 Rosie did a great job singing and Skanic had a fun set. After the Belly Up, it was the second time I had heard her sing with them. I got pretty plastered on Tequila through the night. I drank three-quarters of a bottle of Hornitos. I had never had it before but I really like it. It is very smooth. Not as good as chilled Patron, though. 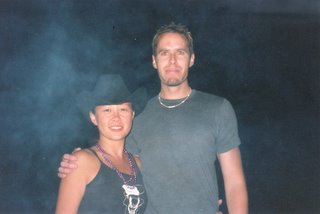 I was so dehydrated in the morning that I got two really bad hamstring cramps in the same leg when I tried to get out of my tent. I was writhing on the floor in pain for awhile. Heh! It took till Wednesday for the soreness in my right hamstring to go away. 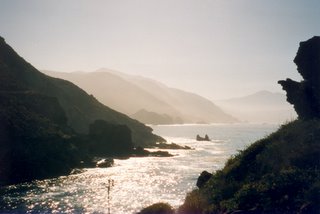 After a morning hike, Rosie, Jeff & I had breakfast burritos at Estella's Cantina before packing up to go home. On the trip back north, we stopped for lobster in Puerto Nuevo.
Posted by Noah Unsworth at 2:26 PM