I finally made it out to the desert again this weekend. This time it was the sand dunes at Glamis. It was further north of the spot we went to last time, but still part of the same Algodones dune field. Chelsea and Forrest came with Jeremy and me this time. 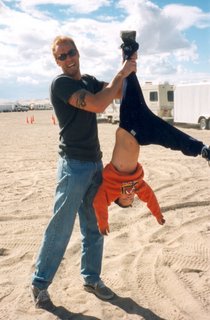 The weather was perfect and it was very beautiful, especially at sunset. We went on a night ride and it is quite an adrenaline rush dropping into steep bowls barely illuminated by small headlights. I also went on a fun dune buggy ride. The driver was a maniac and we ended up blowing an axle going up a steep dune. It was great but we had to push it a ways back for the tow. 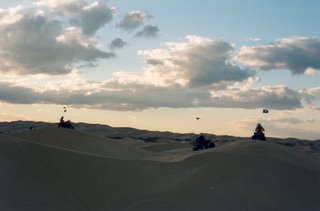 My boss, Blayne, bought rainbow flags for his ATV quads, not knowing that they can stand for gay pride. (The quads have flags on tall sticks so others can see you coming over the top of dunes sooner to prevent head-on-collisions.) Anyway, I noticed the flags but didn't say anything because I thought maybe I was wrong about what they meant. My friend, Jeremy, and I were out cruising and we stopped to help push a stuck pickup out of a hole when another truck came speeding by. Some asshole stuck his head out the window, flipped us off and screaming out that we were fuckin homos and should get the hell out of here. We thought, "What the Fuck!" but then we realized that they had seen our rainbow flags and thought we were gay. 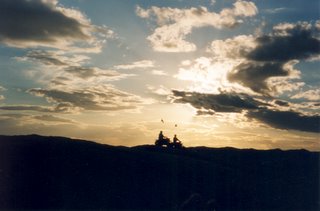 We had a good laugh later, but it sucked that people are still so bigoted out there. It's funny that the only time people are like that is when they are in big groups or speeding by. Cowards!
Posted by Noah Unsworth at 5:00 PM

Email ThisBlogThis!Share to TwitterShare to FacebookShare to Pinterest
Labels: Glamis