Tori and I attended our second AcroLove Festival on Saturday. Like the first time, we only went for one of the three days which turned out to be smart because I was completely worn out by the end of the four classes and my legs were extremely sore the next day. After warming up our bodies in the morning yoga session led by Fallon Lev, we spent the day learning so many new things to work on in our AcroYoga practice.

Session 1 (Whips taught by Josh Young and Priscilla Naber) - We had wanted to attend this cancelled class in January so we were happy to get a second chance. We learned the proper feet and body placement for Swan Dive, Back Whip, Throne to Bird Whip as well as a cool looking whip that went from Bird to Forearms to Feet. I was happy that we were able to walk through all the progressions safely. Now Tori and I have the confidence to practice them over and over again until the movements are ingrained in our muscle memory and we can whip them at normal speed. 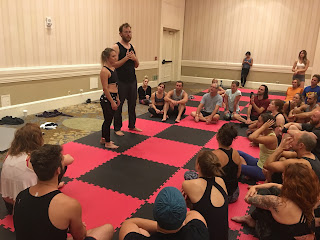 Session 2 (Washing Machines with Chris Filkins and Emily Reuman) - The prerequisite for this class was the Ninja Star which we have learned fairly well. After teaching us some tips about how to improve it, Chris and Emily taught us a new washing machine, Nunchucks, that we have never seen before. After working on several progressions, we attempted the complete machine that starts in Front Plank and transitions through Side Star into Goofy Reverse Hip to Foot and back up to Side Star. Chris and Emily's other names for it are the "Arch Bishop" or "Crescent Moon" since the flyer has to arch their body through the back side of the machine. The hardest part for me to learn was where to move the foot that was not currently supporting the flier. It kept getting tangled up but after watching the teachers demonstrate it several times I finally learned the correct placement. They also stressed the importance of learning Free Side Stars to help improve washing machines. I was so happy we were able to pull Nunchucks off (tentatively) by the end of the class. My nickname for it is "Dark Side of the Moon".

Session 3 (AcroDance with Ana-Caroline Saboya and Ariel Dubov) - I wanted to attend the Group Washing Machines class after lunch but Tori convinced me to take AcroDance instead after promising me there would be no counting. After practicing some jump timing skills, we worked on our Front and Back Walkovers. Normally, I can do these with no problems but my legs were dead tired and I struggled to press the flyers back over my head. The first big skill we learned was a new counter-balance pose where Tori had to hop up and wrap her legs around my mid-section. I had it pretty easy as the base but she had to lock her ankles and squeeze really tight as I leaned back. The final skill had two versions, hard and harder. With Tori's arm across my shoulder, she would hop up in a pike position before I used her momentum to swing her around my back as she rotated back to her feet. In the harder version, I would hook her knees as she lay across my back and swing her around and up into my arms in the Cradle pose. As you can tell from the video below, it still needs a lot of work. Ha! 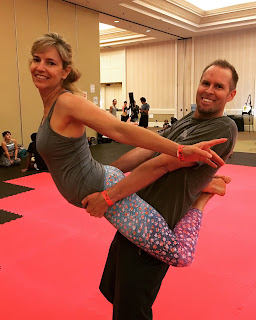 
Session 4 (Pops with Hobs Hobotus and Lizzy Tomber) - Our Pops have improved a lot over the last six months but in this class we learned that our technique has been wrong. We found out that my arms are supposed to be bent as the base while the flyer should have straight arms. We had been doing the reverse so this threw us for a loop and it took awhile to re-calibrate while attempting the Inverted Side Star Pops. Instead of me basing two flyers in the earlier classes, this time our group contained three bases and Tori so it was less of a workout for my exhausted legs. With two big spotters, we felt very safe attempting the Reverse Star to Inverted Side Star Pop, Reverse Star to Reverse Hand to Hand Pop, and finally the hardest Inverted Side Star to Reverse Star Pop. With the assistive hands-on-spotting, we were all able to successfully complete each one. 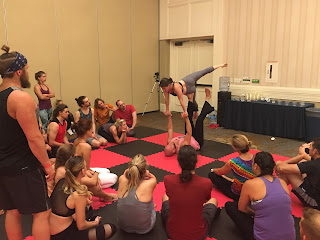 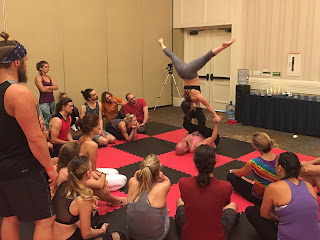 It was a great festival for us. We learned so many new things that will keep us busy for awhile as we work on polishing these new skills.
Posted by Noah Unsworth at 10:19 PM