I went to the coolest house on Friday night for Nicole's birthday party. It felt like the set of the Swiss Family Robinson movie with a four foot iguana to boot. Dominating the backyard was a giant tree house with a rope swing. Three ladders winding up the truck led to the first level where beds and a small TV decorated the stained-glassed interior. I was surprised to find another ladder leading even higher. 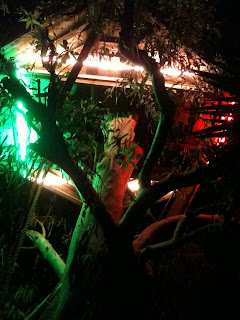 Extending out from its roof, there was a moving platform suspended by ropes and pulleys. It scared the crap out of me when I first stepped out on it and it started swaying around. I thought the branch it rested on was about to snap. I wish I had a regular camera with a flash because the top two levels were too dark to shoot with my phone. A swinging suspension bridge crossed over to another tree containing an even higher platform. About 60 feet above the ground, it had a great view of Leucadia and the party below. 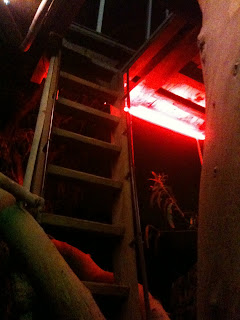 I spent most of the night in the crowded hot tub heated by a wood burning fire pit. Blackened copper tubing coiled over red hot coals kept the water nice and hot. The only drawback is that the water carried a strong aroma of burning wood that I can still smell on my skin after two showers. Flip a switch and a powerful waterfall would drop from six feet into the center of the tub. The pounding water felt great on my neck and shoulders, but I had to keep my thumb over my beer to keep the spray out everytime we turned it on. It was nice to be able to switch between chatting outside in front of the fire and soaking in the water. 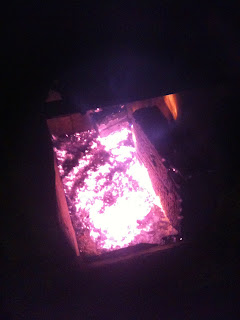 The constant supply of alcohol was my downfall, sitting in the hot water made the cold beers go down too easily. I have a quite a hangover today.
Posted by Noah Unsworth at 2:35 PM