Tori has been catching for many years now but today she attempted her first back flip out of the catch trap. Here is the video of her second attempt. Now I'll have to get up the nerve to try it.

While Dave was helping my wife pump up her swing by pulling on the safety lines, the carabiner caught on the net and suspended her at forty-five degrees. She was stuck for a few minutes before they could free her. 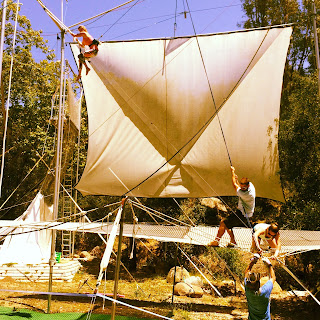 Afterwards, she said it was more tiring practicing tricks out of the Catch Trap since she had to re-climb the rope for each attempt. The ladder up to the board is not so bad after all. :)
Posted by Noah Unsworth at 8:24 PM