I had two weeks off from work in August and I was able to drive up to Northern California. It took thirteen hours to drive there from San Diego with my 15-year old brother, Jordan. We stayed at a friend’s house, out in the woods. We spent most of our time swimming in the river that went through the property and cruising around on a golf cart. Pretty boring sounding, but it felt good to relax. We visited the Lava Beds National Monument, the site of an old lava flow near the border of Oregon. It was fun clambering around in the icy and pitch-black caves with just a flashlight and a helmet. I spent most of the time crouched over and walking on my hands and knees in the low-ceiling tunnels. We saw only six of the fifteen caves, so I wouldn’t mind going back some day. 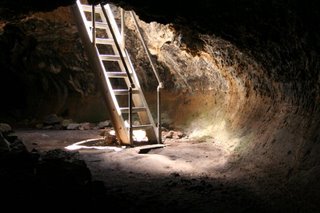 My brother and I stopped in San Francisco on the way back and drove over the Golden Gate Bridge. It was my first time traveling there. You could see the old prison of Alcatraz Island from Pier 39. Alcatraz was a lot closer than it appeared in the movie, The Rock, with Nicholas Cage. It looked like it wouldn’t be that hard to swim the distance between them. From San Francisco, we took the coastal route and stopped in Pismo Beach around twilight. We took a swim in the ocean and I ended up diving forward over a wave right onto a rocky reef hidden less than a foot below the surface. I was lucky I wasn’t hurt, but it was pretty funny. Besides San Diego and LA, I hadn’t seen that much of the California before now. I have wanted to take a road trip for awhile now.

Princess Diana died, I was watching CNN when they said she was injured in the car crash. I can’t say that I knew that much about Princess Diana before, but I’ve learned more in the last two weeks about the English Royal Family than I ever wanted to know in my entire life. Actually, I thought that the funeral was nice, but a bit too much of a public spectacle. They have been playing Elton John’s song non-stop on the radio. Mother Teresa’s death has almost been lost in this.

I have started school for the fall. I am taking it very easy. Only a creative-writing class and volleyball for fun.
Posted by Noah Unsworth at 2:12 PM