Mary Ann and I went tandem skydiving on the 13th this weekend in Perris, CA. Mary Ann had wanted to go skydiving ever since I told her about my earlier experiences jumping from a plane. She was super excited when I got her a gift certificate for Christmas. 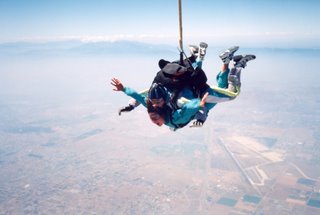 I was really looking forward to the tandem jump as well. I have jumped out of a plane six times previously but because they were solo jumps my parachute was pulled open by a static line attached to the plane. Static-line skydiving was great, but I didn't get to experience much free-falling as I jumped out at only 3,000 feet and I'd only get a few seconds to enjoy the free-fall before the chute jerked open. 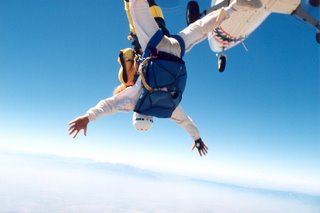 The instructors were really nice up in Perris and because we were doing tandem jumps we only had to take a short half-hour class before our flight. The plane at Perris was big and held a large group comfortably, unlike the small Cessna I had experienced before. We boarded and the plane climbed up to 12,500 feet before leveling off. Mary Ann was at the other end of the plane with her instructor and cameraman and was chatting and laughing so I wasn't nervous for her. 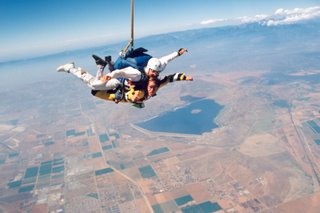 Mary Ann went out of the plane several minutes before I did and she handled it very well. Normally, I have major butterflies before jumping out of a plane by myself, but with an experienced instructor strapped to my back I was worry-free this time. The cameraman assigned to me climbed out the door before us and hung onto the side of the plane and jumped at the same time we went out of the door into the wide open sky. The free-fall lasted 45 seconds which doesn't sound like very long but seems like an eternity up in the sky. We did a few spins and interacted with the cameraman before I pulled the ripcord and we took a long leisurely ride down to the ground. 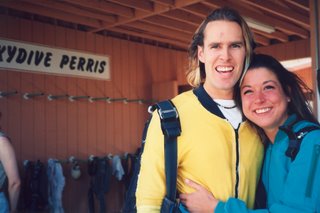 On the ground, Mary Ann was smiling from ear-to-ear as she described her jump to me and how she and her instructor had gotten off-course and had to land in a nearby field. We waited around awhile to watch the videos of our jumps and get our film before heading home. Mary Ann fell asleep in the car on the drive back. I was not surprised, the adrenaline rush of skydiving really drains you after the first time.