Sailing to the Coronado Islands, Mexico

Julie has a friend who belongs to the yacht club down at San Diego Harbor and she invited a group of us to go sailing with them this weekend to the Coronado Islands south of San Diego. They are four small rocky islands in Mexican waters off the coast of Rosarito. I had been there before in 1995 for the last ocean dive of my scuba certification. 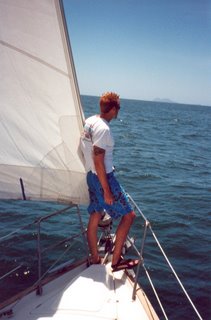 It was my first time on a sailing yacht. We had a nice wind behind us and we traveled the 13 miles to the islands in straight line. Normally I get seasick fairly easily in medium size fishing and diving boats, but I was fine on the sailboat. I think it is because sailboats have a heavy keel which sets them deeper in the water so there is less bobbing on the surface. 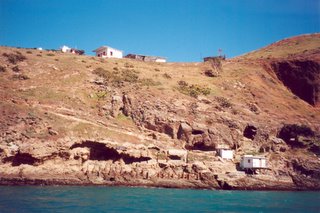 We anchored in the tiny bay of South Coronado Island. There are a couple of buildings on the barren hill that houses a Mexican Navy garrison. On the shore of the bay is an old group of pylons that used to hold a casino from the days of Prohibition. 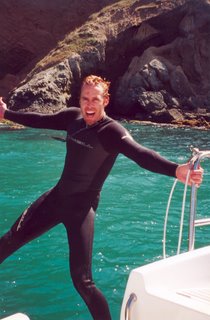 The captain and I went snorkeling around the yacht. The water was very cold but it was a beautiful sunny day. We had a nice lunch and relaxed in the sun until it was time for us to raise anchor and head back to San Diego. 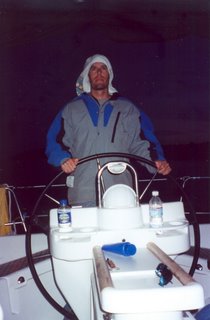 The sail back was more exciting because we had to tack back and forth against the wind. I really enjoyed riding in the boat that was sailing at a sharp angle to the water. The return journey took allot longer and it was dark before we reached the harbor. It was cool to see the lights of San Diego bright against the dark ocean. I was allowed to steer the yacht for awhile as we were coming into the harbor. It was a great day.
Posted by Noah Unsworth at 11:56 AM