I completed the Los Angeles Triathlon on Sunday. It was a point-to-point triathlon that started at Venice Beach and ended at the Staples Center in Downtown LA.

The triathlon was real fun even though it was blazing hot during the run and I got a bit dehydrated and cramped up bad after the finish. I think I did really well on the swim though. The split times aren't up yet but I think I had to be in the top twenty at least on the swim. 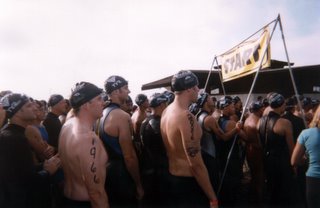 The bike section was really fun. It was twenty miles from Venice Beach to Downtown LA so it was very scenic with the whole road sealed off by the police the entire way. There was long upward grade about 3/4 into it and in the last mile there was a short, but really steep hill to climb. There was also a steep downhill section that was very fast, but what was so bad about that was that you had to go back up it on the run, it was brutal. 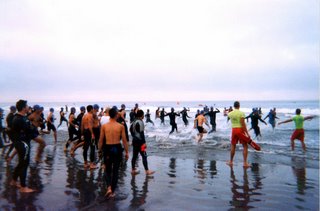 The Pros started after all the others so I had hoped to watch them come into the finish after my race was over, but my best view of the Pros was as they sped past me on the run. My wave start time wasn't far enough ahead to watch them finish. There was a helicopter circling over head to film them also. That was pretty Cool!