I went to Portland for a three days this last weekend to visit Lindsey. She picked me up from the airport in the early afternoon and we went to lunch in a nice pub at Edgefield Manor outside of the city. It was pretty cold in the 30s with a drizzling rain.

After lunch, we drove along the Old Highway to get to the Waterfalls in the Colombia River Gorge. It was very scenic as we drove past farms and through the temperate rain forest here in Oregon. As we gained a little altitude, it started to snow lightly. Before descending into the gorge, we pulled over at an impressive scenic overlook with a great view of the Columbia River in both directions despite the fog. We didn't stay long because the freezing wind was blowing hard at the top. 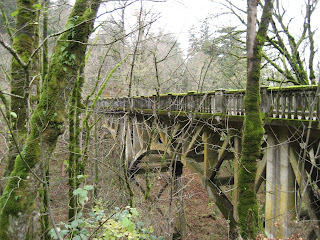 The first waterfall we arrived at down in the gorge was the Latourell Falls. It was cool with the water plunging 249 feet past the intricate formations on the black rock of the cliff. A large patch of yellow lichen high up on the steep inverted face was a nice visual touch. 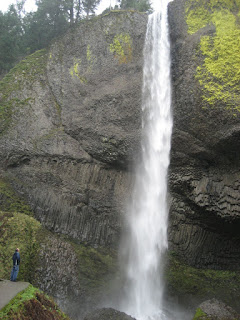 We then drove down to the less dramatic, but more beautiful Wahkeena Falls. The waters drops 242 feet across several tiers and then flows over moss-covered cobbles. We had a nice little hike up to the small stone bridge and tried to avoid the spray from the waterfall as the snow started to lightly fall again. 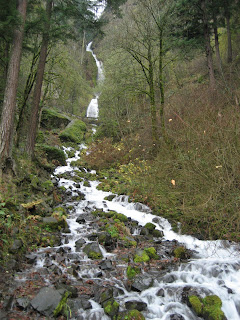 Our last stop was at the second tallest waterfall in the United States at 620 feet, the Multnomah Falls. I am glad I saw this one last because it was the most impressive with the water taking a long plunge into a pool and then over a second drop right underneath the arched bridge. 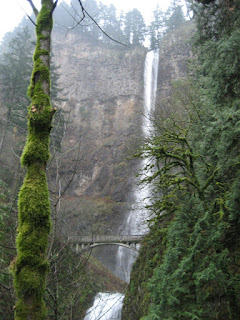 After a short little hike past the bridge, we went inside the Lodge near the base of the falls for a cup of tea. It was quite nice sitting in front of a warm fire with views of the Columbia River.

Friday night, we went to see a movie at the Bagdad Theater. I have always wanted to go to one of those theaters that serves food and drinks to you at your seat, so it was pretty cool. I had the Captain Neon Burger with blue cheese and bacon and Lindsey had the Fish and Chips. We also had a pitcher of the Ruby Beer which had a nice raspberry flavor. Drinking alcohol while watching "Superbad" is a perfect combination. 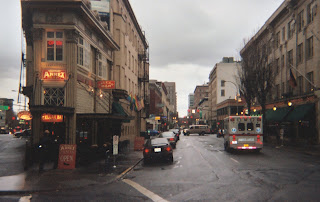 Large snowflakes were falling from the sky on Saturday morning, but they had turned to rain by the time we went to breakfast and caught a train downtown. We walked over to Powell's Books, a huge bookstore the size of a city block, that is at least 5 stories tall. I was able to buy a few out-of-print books that I was missing from my bookcase at home. 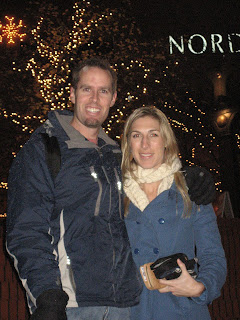 Afterwards, we went over to the Beer Festival at Pioneer Courthouse Square to meet up with Kristen. It was very crowded inside with long lines to get to the kegs so we end up getting full mugs of beer instead of going for multiple tasting samples. Lindsey and Kristen chose "Bye-Bye Frost" which was extremely bitter and I got the "Organic Kentucky Christmas" which wasn't too bad. To escape from the crowd, we walked over to the Oliver Twist Pub down the street to have another drink and chat. 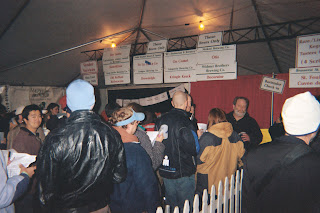 We finished up our Saturday night by going to the Portland City Grill on the 30th floor of one of the city's towers. The fancy restaurant had great views of the river and the city. We found a nice table in the bar where we started off with some Pomegranate Martinis. Very tasty, but also very sticky. For dinner we had the Tomato-Pesto Ravioli & Butterfish. I was full, but I couldn't resist their specialty desert, Fresh Baked Cookies served with Ice Cream. Very Good!!!!

The weather turned stormy on Sunday with heavy winds. The rain was blowing sideways. My flight home was very turbulent.

Portland on Dwellable
Posted by Noah Unsworth at 10:04 PM

Email ThisBlogThis!Share to TwitterShare to FacebookShare to Pinterest
Labels: Travel