I went to the Chargers Playoff Game against the Tennessee Titans yesterday. They came back to win 17-6 after trailing 0-6 at the beginning of the third quarter. It was so much fun!!! It was the first Chargers win in the NFL Playoffs in thirteen years. 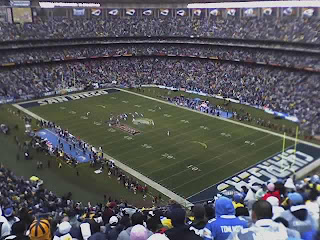 I was up in the nosebleed seats near the eastern end zone of Qualcomm Stadium. It started raining right as the game started, but I had a good poncho that kept me dry for the entire game. The crowd was very loud and waving the white towels handed out at the front gates. 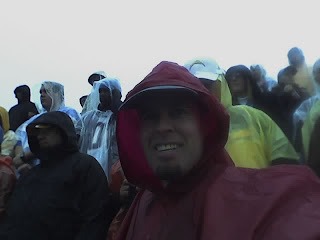 The Titans started the game tough. They did a good job running the ball and controlling the clock. The Charger's offense was sluggish for the first half and Antonio Gates, the best tight end in the league, was hurt in the second quarter and had to be carted off the field. But our defense played very well, keeping the Titans to only two field goals and Shawne Merriman forced a fumble near the end zone on another drive. 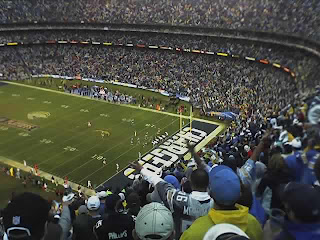 The Titans went all out to stop the run the entire game, keeping LaDainian Tomlinson contained. They were very effective, but this left them vulnerable in the passing game and Philip Rivers started to get on track in the second half with long passes to Vincent Jackson and Chris Chambers. They both ended the game with over 100 yards each. I can't count how many times I leapt from my seat yelling as Rivers threw long balls to the wide open receivers down the field. 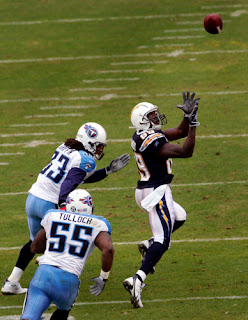 I had a great view from my seat of LaDainian Tomlinson's giant leap over the pile to score the clinching touchdown in the 4th Quarter. He was met hard right at the line by a Titans linebacker, but he was able to reach the football into the end zone on a second effort before the whistle blew. It was crazy in the stands, everybody yelling and high fiving. 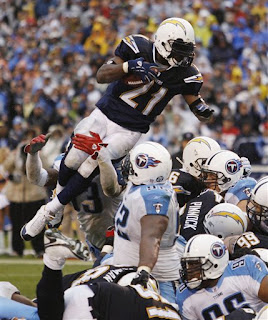 Next week, the Chargers go on the road to play the defending Super Bowl Champions, the Indianapolis Colts in the Divisional Playoff Round. Should be a great game. Can't Wait!!! 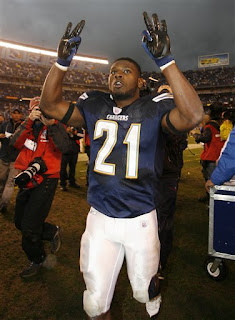 Traffic was horrible on the drive home, but I was in too good a mood to care. I did witness a crazy accident as I was making the long walk back to my car. A woman's car spun out of control 100 yards in front of me, jumped the curb and hit the concrete wall on the side of the bridge. Right where I was about to walk!!! Luckily she was unhurt, but rain causes crazy things.

The Chargers beat the Indianapolis Colts in a major 28-24 upset in the Divisional Round of the Playoffs. It was an exciting game with a lot of lead changes and big plays. LaDainian Tomlinson got hurt in the 2nd Quarter and Philip Rivers was injured at the end of the 3rd and they both had to leave for the rest of the game. The backups had to come in on offense and they drove down the field for a winning touchdown in the 4th quarter. The defense had two great defensive stands, forcing the Colts to twice turn the ball over on 4th down at the end to win the game. 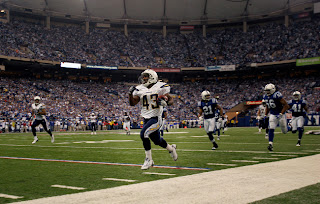 Next week the Chargers go to face the undefeated New England Patriots in the AFC Championship game. The winner goes to the Super Bowl!!!

Well, it was fun while it lasted. The Chargers lost to the undefeated New England Patriots yesterday, 21 to 12 in the AFC Championship game. It was a close game with New England leading by only 2 points before they got their final touchdown in the 4th quarter. The injuries to LaDainian Tomlinson and Antonio Gates were hugely detrimental in this game. They are the Charger's biggest weapons in the Red Zone, but we had to settle for three field goals down there instead of touchdowns with both of them hurt. The defense played great, holding the high-powered Patriots offense to their 2nd lowest point total of the year and they picked off QB Tom Brady three times. He only had 8 interceptions all through the regular season.

There is always Next Year!
Posted by Noah Unsworth at 8:31 PM