I am writing this email from our hostel on the Island of Corfu in Greece. It sits along the steep cliff overlooking the clear waters of the Ionion Sea. After very little sleep on the night ferry that arrived before dawn, we are having a nice relaxing day at the beach. 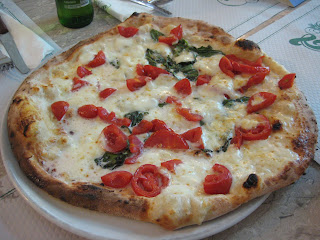 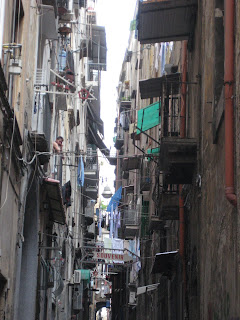 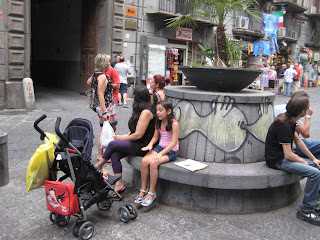 We spent two nights in Naples. Tuesday morning, we caught a train down to the city from Rome. It took about two hours but time flew as we played cards. I ended the train ride winning seven games of Asshole in a row. A couple kids were playing with a whoopee cushion in the seats in front of us until their mother came back to smack them. I don't think they felt it though, they were laughing too hard. 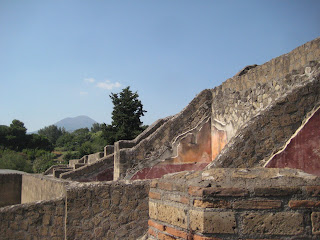 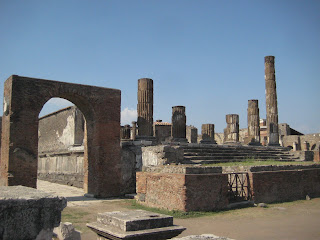 After catching a taxi to our hotel, we all went out for Naples' most famous food. We ordered two of the official Margherita pizzas and four more with additional toppings. They were all pretty good, but my favorite was the one with sausage and peppers. The Margherita with prosciutto was great as well. I think I tried every one except the mushroom. When we left, we walked past the oldest pizzeria in Naples, Pizzeria de Michele. I would have wanted to eat there instead, but it was crazy busy and they only serve pizza to go. Plus, they only make the original Margherita, with or without cheese. (You really have to pay attention when walking through the Old Town or you will get taken out by one of the scooters zooming around the narrow streets.) 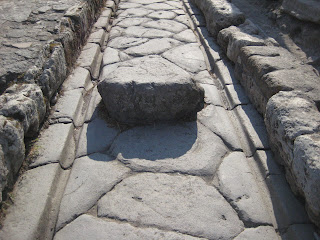 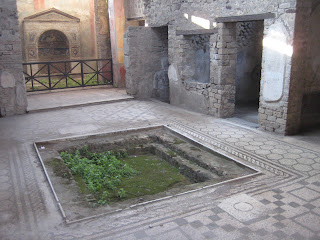 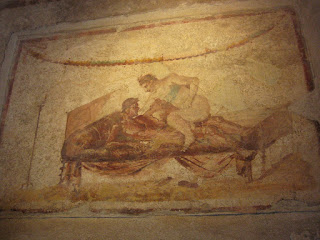 Jumping on a train to Pompeii with full bellies, I ended up sitting next to an older Italian gentleman covered with tattooed symbols and wearing very, very short cut-off jeans with his shirt up over his belly. I think he got the tattoos in prison because when I pointed and asked about the bloody knife crudely drawn on his thigh, he crossed his arms and tapped his wrists together. He didn't speak English and our guide, Peter, couldn't understand his thick Nepali dialect. He was very friendly, talking and laughing with us the whole way as he played his tiny radio. The only thing I could understand is when he started to talk about Steven Seagal and making martial art movements with his hands. I got my picture taken with him. 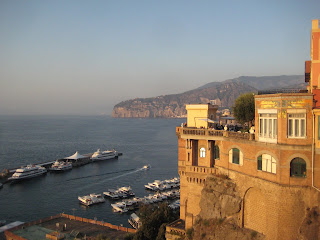 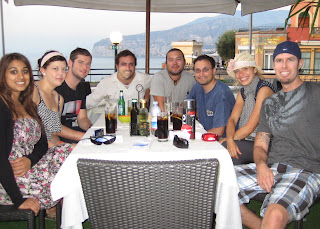 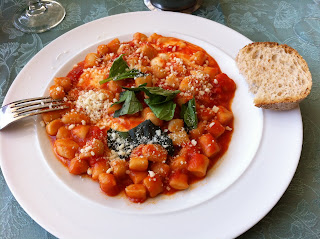 The ancient Roman ruins of Pompeii were very cool. Well, make that very hot since there wasn't much shade. One mansion, covered an entire city block and was filled with large gardens and wide atriums. Most of the first floors of the city were preserved by the volcanic ash from erupting Mount Vesuvius that covered the city in 80 A.D. and it was amazing to see the ruts carved into the narrow stone streets by ancient carts. One of the bath houses was almost entirely intact and we got to walk through all the different rooms. Our last stop in Pompeii was the one of the city's many brothels, called a lupanare in Latin. Inside, frescoes painted over the doorways of the small chambers depicted the acts the prostitutes would perform. Leaving Pompeii, we continued down the coast to Sorrento where we had dinner at the Foreigners' Club on the steep cliffs and watched the sunset before returning to Naples. 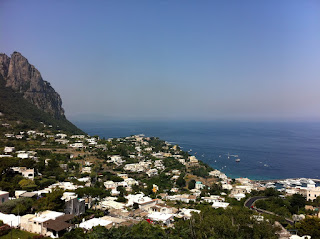 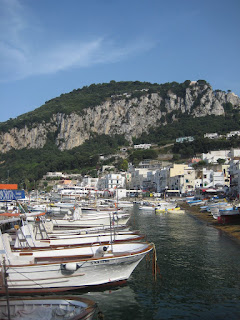 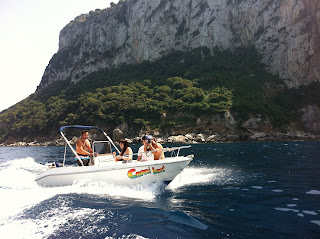 Wednesday morning, we took a ferry out to the Island of Capri. We arrived around noon and took the funicular up to the top of the island where we had lunch on the hillside with great views. After eating, we rented two motor boats to explore the surrounding waters. It takes about 80 minutes to circle the island, but we stopped at the Green Grotto at the halfway point where we anchored and swam into the warm emerald waters inside the caves. While the Blue Grotto of Capri is more famous, you have to hire a guide for 30 Euros to take you inside on a small boat. You can't swim so I'm glad we skipped it. I drove one of the boats the rest of the way back, taking us through a huge arch in the pinnacles of towering rock sitting off the coast. With a glass of wine, my jet lag finally ended after dinner back in Naples and I fell asleep at midnight. 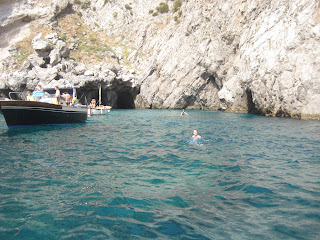 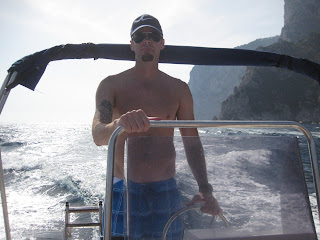 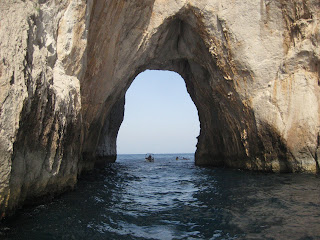 Yesterday was a travel day but our bus didn't leave Naples until 1:30pm so I went to the Archaeological Museum with Jana. About half of the museum contains the original statues, frescoes and mosaics recovered from Pompeii. It was very interesting to see what covered the walls of the ruins we had just explored. The fun part of the museum was entering the Secret Room where no one under 14 is allowed. It contained graphic Roman artifacts like the ones in the Pompeii brothel. The freakiest one was a graphic sculpture of a faun having sex with a goat. We spent the rest of the time searching for more of the bodies from Pompeii, but we discovered they are all kept out at the archaeological site. We must have missed them. Leaving, we spent about five minutes trying to open Jana's locker until she realized that she had pulled out the wrong key. Ha! 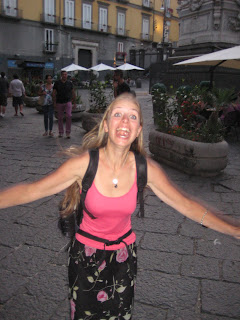 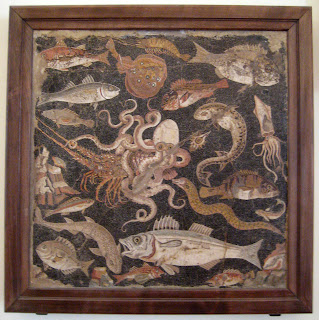 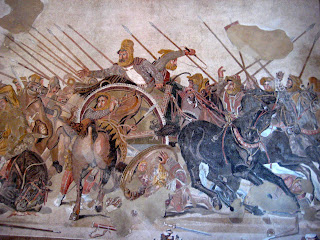 p.s. It was hotter in Naples & Pompeii than Rome, but not too bad. While standing in the shade, it was quite nice. I actually spotted garbage trucks in Naples picking up trash around midnight. I guess the strike is over, but I did still see lots of scattered trash on the outskirts of the city. 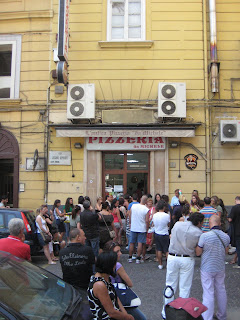 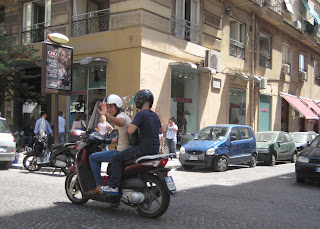 p.s.s. There are not really any recovered Roman bodies from Pompeii. Instead, hollow pockets were left behind in the volcanic rock after falling ash trapped the fleeing citizens. While uncovering the city, Archeologists drilled down and filled the pockets with plaster which hardened in the shape of the person who had collapsed in that spot. I only got to see three of them, plus one of a dog. :( 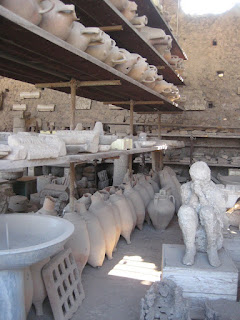 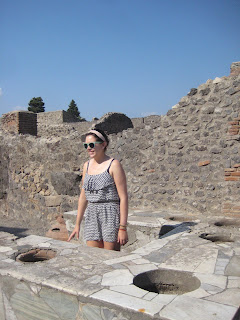 p.s.s.s. Ani almost got run over by a boat while swimming backwards in the ocean outside the Green Grotto. We were all shouting and the large boat slowed just in time for Ani to notice it and push off from the bow with his hand. It was a close call. 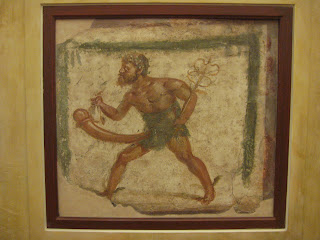 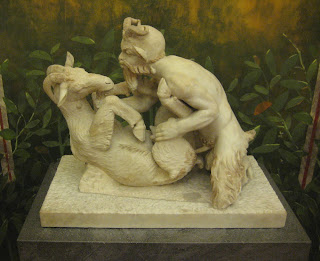 p.s.s.s.s The funniest part about the Secret Room was the two youngs girls left to wait outside by their parents. They were sitting on the edge of their seats, craning their necks to see through the forbidden doorway. 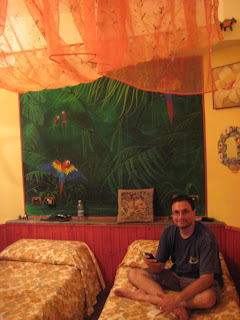 p.s.s.s.s.s. Our hotel in Naples looked really bad from the outside, but inside it was completely different. Eugenio, Ani and I shared a room with it's own unique Tropicana theme with wall paintings of parrots and pink drapes hanging over the beds. Heh!
Posted by Noah Unsworth at 1:28 PM