Our bus from Naples to Bari on the opposite coast of Italy has been the only difficult part of this trip. While the countryside was beautiful, the air-conditioner broke at the beginning and the giant windows would not open. In Bari, we got stopped for a brief passport check before we caught a train down to Brindisi located on the heel of Italy's boot. We ate some dinner (I had Spaghetti al pomodaro & a double gelato of Hazelnut and Whisky Cream) before boarding our night ferry around 9:30. We thought we would have assigned seats to sit in, but a ship's steward told us our tickets didn't include them. Oh well, we made the best of the situation, finding a doorway to sit in (a freakin' wind tunnel) and playing cards until we found spots to sleep on the carpet. I ended up next to the stairwell. 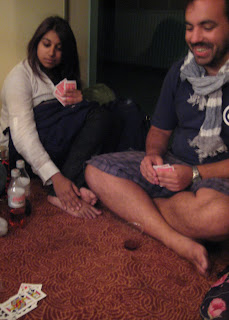 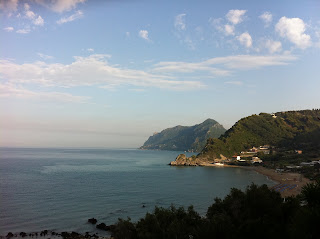 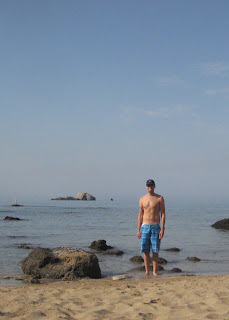 We arrived in Corfu at 6:30 in the morning and were picked up by the Sun Rock Hostel. It is a low-key place located on the west side of island, right above the beautiful Pelekas Beach. After a breakfast of Greek pancakes (doughnuts with cinnamon and honey), we headed down to the beach. After the non-stop sight-seeing around Rome and Naples, it is nice to relax for a bit as we explored the tide pools and swam out to the nearby rocks. The water is so blue and clear. Except for a lunch break we hung at the beach all day before heading up for the late dinner. Everyone sits down to the same big meal served by the hostel staff. Very good! We ended up playing cards and drinking on the balcony until 2am. We all tried a shot of Raki, an alcohol distilled from leftover wine grapes. It is the strongest tasting drink I have ever had in my life. Brutal! 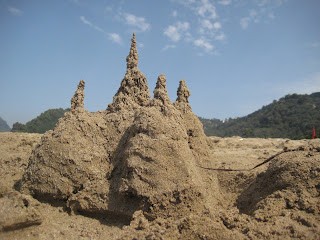 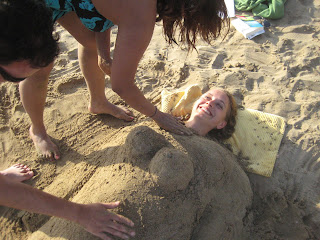 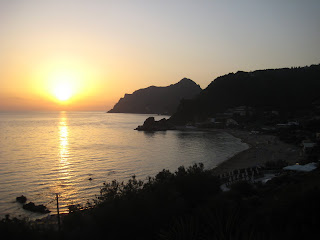 Saturday was the first morning on this trip that I have slept in. It felt good to get in the extra hours. After hanging in the shade on the rooftop patio during the hottest hours of the day we headed back down to the beach. Patrick, Ani, Jana and I decided to go para-sailing since none of us had done it before. A boat picked us up and took us out to a floating platform in the ocean. Hooked up in the harness, I grew a little nervous as I watched the long red rope uncoil in front of us while the boat sped off into the distance. Patrick and Ani dropped off the edge of the high platform before rising into the air, but Jana and I lifted off pretty quickly when we ran forward. Floating down the coast, we had to be at least 200 feet high. Twice, the boat slowed for us to splash the water with our feet before speeding back up. Landing in the sea at the end was fun, but we were tangled in the lines for a few seconds before freeing ourselves. Hearing about our experience, Eugenio and Peter decided to try it as well. Making sand castles and playing with a volleyball, we hung out at the beach until sunset. 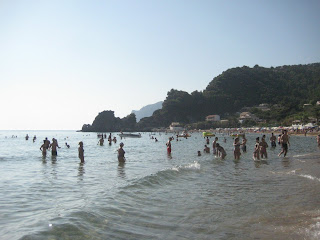 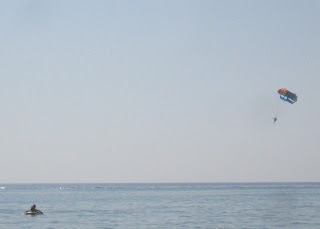 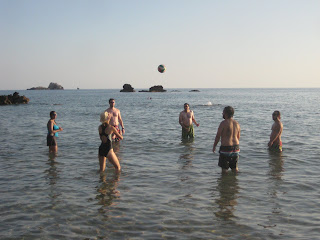 Sunday was a long travel day, we caught a bus in the morning, driving across Greece until we arrived in Athens around 8:00pm. Luckily, the air conditioning worked on this bus and the nine hour ride passed quickly. I was actually able to get a little sleep this time, but I missed it when we crossed the huge bridge over the Gulf of Corinth to the Peloponnese. After checking in, we had dinner at a restaurant with a great view of the Acropolis lit up by spotlights. After buying some cotton-candy, we walked closer to the high outcrop to get a better view. Athens is much hotter than everywhere else we have been and very humid. 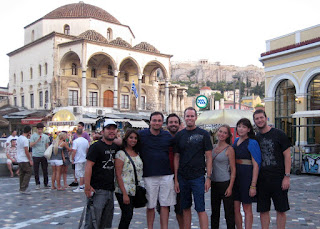 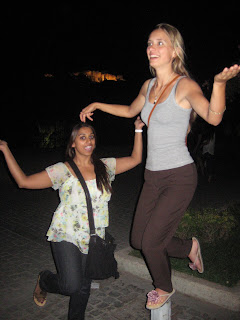 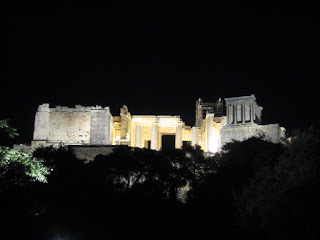 I am the only one in my group going all the way to Istanbul so Monday was the last day for us to hang out together. Since Ani had to leave for the airport before noon, we woke up early to hike to the top of Acropolis. It reminded me of the Getty Center in Los Angeles that I visited earlier this year, lots of towering white stone overlooking a crowded metropolis. The heat was not too bad at 8:30am and we just missed a huge crowd arriving as we left. We then headed over to the nearby Ancient Agora (the old ruins of the Athenian government) but it was so hot we didn't stay long. After the beauty of the Acropolis, I have about reached my fill of ruins anyway. For lunch, I had my best meal so far in Greece with Jana and Natasha. The hotel clerk recommend a restaurant hidden down a side alley frequented by the locals. The meatballs with rice were delicious. I wasn't too hungry but I ended up eating all five. 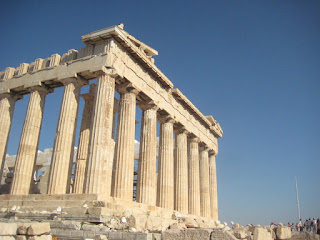 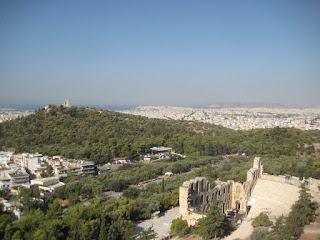 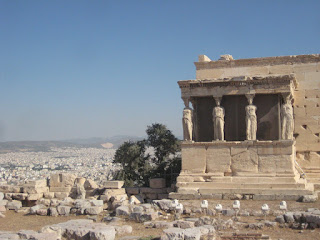 Since the New Acropolis Museum was closed on Mondays, we checked out the large Central Market in the afternoon (meat/fish market) and shopped at the Monastiraki Flea Market before I met up with my new travel group in the evening. Eugenio, Natasha & Jana joined us for dinner at a rooftop restaurant in the historical Plaka district. (More delicious Greek pancakes with ice-cream.) It also had a great view of the Acropolis, Lycabettus Hill and the rest of the city. Tomorrow, we leave early to catch a 7am ferry to Santorini. I will miss the new friends I made. 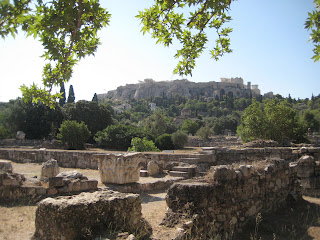 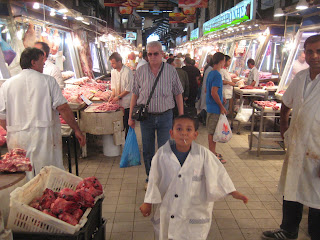 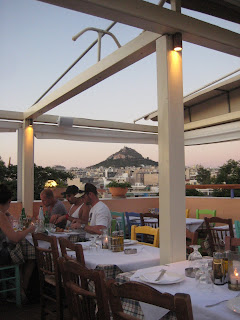 p.s. At first sight, the shallow tide pools in Corfu seemed barren except for sea anemones and spiny urchins. But walking slowly, we soon discovered the rest of the camouflaged inhabitants scurrying away from our feet in the clear water. Tan speckled shrimp, miniature flounder and fish with leg-like front fins, hid around us, all about the length of a finger. One tiny fish species was attracted by the sand kicked up, always congregating around our toes as it searched for food. 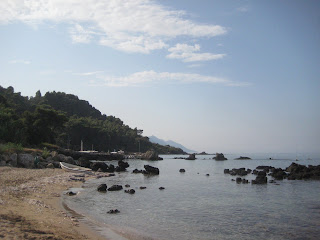 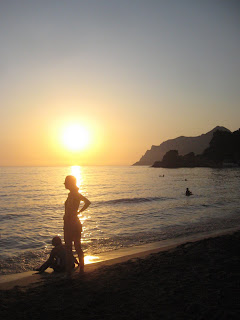 p.s.s. Our hostel in Corfu had a unique tab system based on the honor system. Every drink we pulled from the fridge, every sandwich we ordered or item grabbed from the small store, we would write down in the book kept on the bar. With internet, laundry and many, many ice-creams, my tab ended up around 40 Euro. Not too bad. 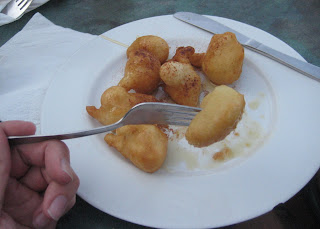 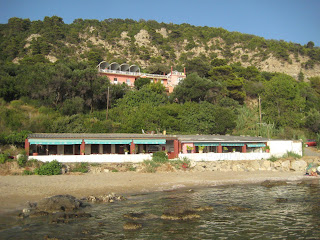 p.s.s.s. In Greece, not only is there a new language but a new alphabet as well. Since I was never in a fraternity, I am completely clueless about the lettering. In Greek, my name is spelled Νώε.
Posted by Noah Unsworth at 11:30 PM