I am on the plane home from my two month backpacking trip to Europe. I arrived in Paris this morning on a night train from Utrecht, Holland around 7am. This is the seventh time I have been in Paris on this trip, but mostly I used it as a hub that I quickly passed through. This last stop I wanted to go and visit the famous Louvre, but because of the subway bombing in July the lockers are still closed and there is no baggage check. There is no way I am going to hike through the museum carrying this heavy backpack. I guess I will have to make another trip here to visit the Louvre. 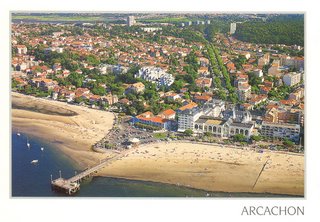 I had a fun time in Utrecht. It took me two days on trains to get there from Portugal. One of my brief stops between train rides was in Arcachon, France where I spent half a day at the beach, swimming and relaxing on the sand. I must say that I prefer the Atlantic Coast of France more than the French Riveria on the Mediterranean. More sand, less rocks. It was a nice little stop before taking a night train to Paris. 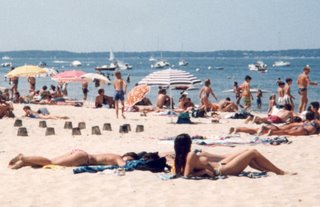 Mireille Sennef, who I befriended in Ireland, met me at the train station in Utrecht which is right smack in the middle of Holland. She had her bicycle and she gave me a ride back to her place with me perched precariously on the back. We stopped for a beer at a nice little place and caught up. After a spaghetti dinner, we went out to a bar to meet her friend and I had quite a few shots before we walked home. 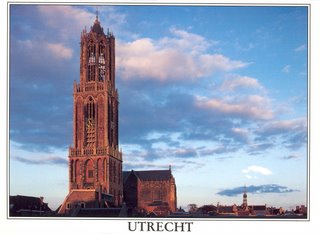 On Friday, I slept in late, explored a little of the town and hung out with Mireille's roommates watching the Track & Field World Championships from Goteborg on TV. Christoph arrived that afternoon and we all went out for pizza and then went to the bars and clubs till 5am. The Dutch people are very tall, I am 6'2" but I only felt average height around these guys. That is unusual for me. 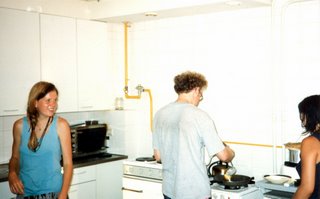 Saturday was a lazy day, we slept in till about three and hung around before taking a walk to the grocery store. A group of us made pancakes for dinner. All different types that I wasn't used to, made with ham, cheese or fruit cooked right in. Then it was time to say goodbye and I was given a ride to the train station on the back of a motorcycle. Much faster than the bike!

p.s. While we were at one of the bars on Friday night, one of our group accidentally pushed a full pint glass of beer off the counter with his elbow. Without a chance to think, I made a grab for the glass and caught it half-way to the floor without it spilling a drop. Everyone was amazed and I have to admit, I was pretty impressed with my self.
Posted by Noah Unsworth at 8:16 PM