I arrived in Portugal on Saturday around 12:30pm. I spent most of the day walking around town wearing my heavy backpack looking for a bank that was open so I could exchange my money. I met two Germans, two Dutchmen and a couple from France at the first exchange place which was closed but had a sign saying they would be back in 30 minutes. We all set off together to look for another after we were informed that the guy wasn't coming back. After a long search, we were all relieved to find the only bank that was open, change our money and get a bite to eat together. 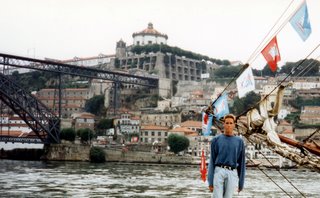 We agreed to meet up again to go out for beers in Porto's old town Ribeira district later that night to celebrate. I met up at the French couple's little motorhome parked by the Duoro River that runs through Porto. They were really nice and shared with me some of the dinner they were cooking on their little grill before the others arrived. We all had a fun time hanging out at the bars and cafes and we stayed out pretty late. It was a long walk back to my hostel along the dark streets and I had a nice hang-over the next morning. 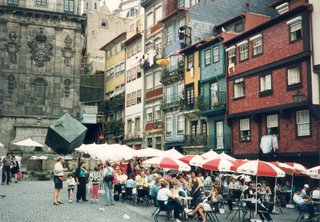 Sunday, I hung out with the Germans again and went on one of the guided tours through the cellars of the House of Sandeman, one of the port wine lodges for which this city is famous. Port is a fortified wine mixed with Brandy that was originally created to be able to survive long ship voyages. The grapes and the wine are grown and produced in the Duoro Valley and then sent down the river to the dock-side cellars in Porto where they are aged and blended with Brandy to create the finished product. We got to taste a nice selection of Ports at the end. 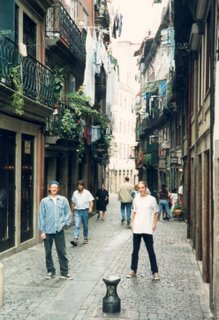 I took a bus to the beach on Monday and stayed there all day. At the bus stop, I had to catch some Portuguese girl who tripped and fell into my arms. The beach was very sunny, but it was a windy day. I had my first decently made hamburger in Europe at a little restaurant on the beach. The cook wanted to know my opinion on his expertise at making American hamburgers. Later that night, I had a big meal as well at a Chinese restaurant. Haven't had that for a while. As the end of my trip nears, I am really starting to crave Mexican food from home. 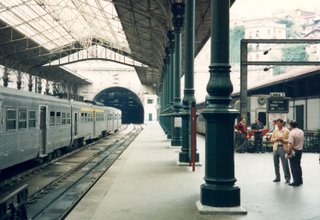 Today, I mostly relaxed and walked around the city after making reservations at the train station. I also bought a new book for 2,700 escudos to read on my long train rides up to Holland and for the plane flight home. I caught the 6:05pm night train to Irun, Spain a little while ago. I have three long trains rides to complete before I reach the Netherlands.
Posted by Noah Unsworth at 7:09 PM