I have just stayed in Tralee for three days. It was very cool and for the first time on my trip, I totally relaxed. My first night in Tralee I went to the Abbey Inn for some Guinness with several others from Finnegans Hostel where I was staying. The pubs don't stay open that late here but they have low age limits. It was pretty unusual for me to be drinking beer in a pub next to a sixteen year old kid. Heh! 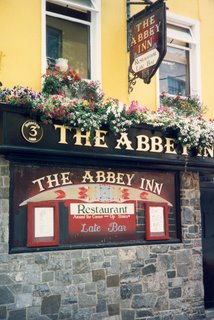 This was the first time on my trip that I have stayed at a hostel with coed rooms. That might have been the reason the hostel was so relaxed and friendly with everybody hanging out together. It was nice to be the only American and hang out with a group of Europeans from Austria, Germany, Switzerland, Holland and other places. We would hang out on the front steps and go out to the pubs together at night. We would sleep in till noon, have breakfast, and do nothing for the rest of the day. It was great. 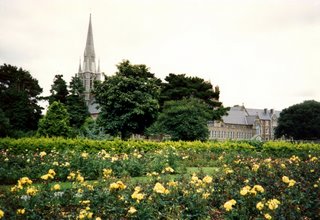 The hostel was in a nice location right across the street from the Tralee Town Park. Tralee is famous for its roses and the park was full of them in bloom. We hung out at the park allot because the weather was so nice and sunny. We even got caught up in a water balloon fight started by some local kids. 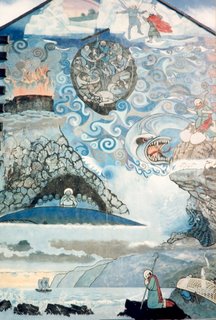 On Sunday, while walking around the small town a bit I stopped to take a picture of a colorfully painted church. Two Irish guys who had just gotten out of the church service wanted me to take a picture of them. They were very interesting to talk to because their Irish brogue was so thick. I could only understand about every third word which was barely enough to get the gist of the conversation. One of them offered to buy me a pint if I saw him later in one of the pubs. He was pretty plastered when I bumped into him on the street that night, but he recognized me and took me to his favorite pub for a pint. That was pretty cool. 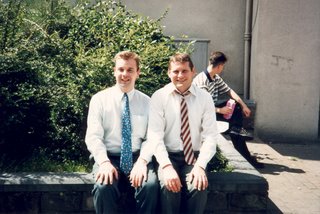 Afterwards I met up with Florian, Mireille, Christoph and some others at a pizza restaurant where we stayed till around 2 am. Most of the group smoked cigarettes that they rolled themselves because it is cheaper. Since I don't smoke, I ended up giving my Marlboro cigarettes to Mireille that I had bought earlier in my trip. They are her favorites but are normally too expensive for her to buy regularly. I have never seen anyone smoke a cigarette after breaking off the filter before. Heh!

I originally came to Tralee in order to visit the Dingle Peninsula where "Far and Away" with Tom Cruise was filmed, but I never got around to it because I was enjoying myself so much here. Oh well. Now I am on 7:30am train to Rosslare Harbor to catch a ferry back to the continent so I can head down towards Portugal.

p.s. I made plans with Mireille to meet up and stay at her place in Utrecht, Holland in about two weeks when she gets back home from Ireland.
Posted by Noah Unsworth at 7:39 PM