The ferry back to France from Ireland was nicer this time. I hung out with a fun group of people in the bar till pretty late at night so all the good spots to sleep were taken. I ended up sleeping on the carpeted floor next to the stairs in the lobby area. In the morning, I met a pretty girl from New York and we had a good time talking on the ferry and on the train to Paris. I was invited to come along to Amsterdam with her friends, but I decided to continue with my plans to head down to Portugal. That was a tough decision. 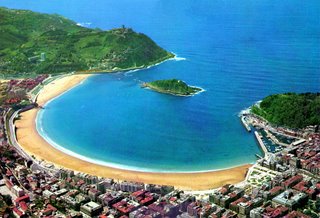 I am glad I was only in Paris for a few hours because the city was extremely hot and humid. The night train to Bordeaux with a couple of guys from the ferry was pretty interesting. We were in a crowded train compartment with several French guys making hash cigarettes that they passed around. They would take the tobacco out of regular cigarettes and mix it up with some hash and then re-roll them. I didn't get much sleep that night in that smoky compartment. 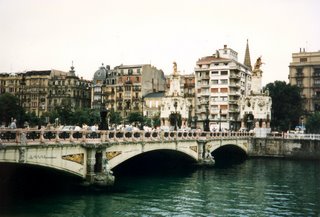 I arrived in San Sebastian yesterday in a morning train from Bordeaux. I walked all over the city with four Americans I met on the train but we couldn't find a hostel with available beds. One of the guys spoke fluent Spanish and he was able to find us two rooms in someone's house for the night. We met a nice guy from Hungary later who had the same problem. We snuck him in to our room and he slept on the floor. 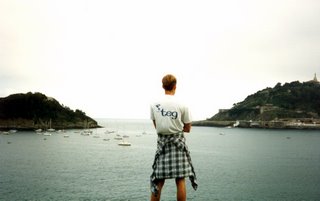 San Sebastian is a beautiful city in the Basque area of Spain. The city surrounds a small natural harbor with a little island placed in the middle like a pearl sitting in a oyster shell. The Old Town was crowded and fun to explore. They have lots of seafood here and we ended up eating tapas at a bar for dinner. I had four of them with a beer. Afterwards, we went for a walk to the top of the mountain that had a large statue of Jesus overlooking the bay. 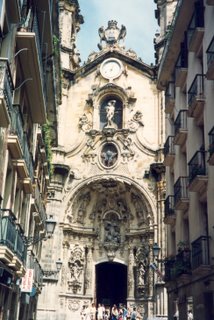 Today, I explored more of the city and then went to the nearby beach of La Zurriola for most of the day. It was nice to swim at the first beach I have been to in Europe that had waves. Nice! I'm still not used to the difference between American and European beaches. I was relaxing on my towel and two pretty girls came up and put their stuff down on the sand nearby. Not having bathing suits didn't stop them from wanting to take a swim as they stripped down to just their underwear bottoms right in front of me before jumping in the water. One of them asked me if I had a cigarette after she came out of the water, but I had just given the rest of my cigarettes away in Ireland. Sheesh! 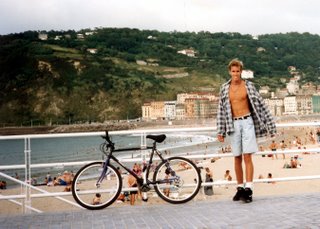 Now I am on a night train to Porto, Portugal. Lots of pretty girls on this train. I think Spain has some of the most beautiful women in Europe.

p.s. The Basque language is pretty unique looking to me. Every street sign seemed to have an abundance of z's, k's and x's.
Posted by Noah Unsworth at 10:53 PM