On Saturday, I caught a flyer's twisting trick for the first time, a Half Turn Catch. Chris performed a turnaround at the front end of the swing and forced out over the board before swinging back into the set position where he performed a half twist at the peak of the swing. I had attempted to catch one months ago but I could not reach the flyer's second wrist as they turned. Chris had both wrists right there for me to grab. He is one our new club flyers who used to work for the two trapeze schools up in San Francisco. (He likes that ours is an outside rig.) I will have to get used to the twisting motion the flyer's momentum carries into my swing after I catch these type of tricks.

For our second catch, we tried the Cutaway Half that Chris was working on earlier in the class. It is a forward somersault with a half twist after performing a turnaround during the swing. He had been traveling it so I swung low for the catch attempt. He didn't get enough height so he still traveled but he did a good job of ducking away from me at the last moment to avoid a harder collision. I still have to convince Tori to throw me one since she does the trick so beautifully.

After our trapeze classes, Tori and I went for a 60-Minute Couple's Magnesium Salt Water Float Tank Session at A Quiet Place Floatation Spa. Tori likes to spray Magnesium Oil on her skin for its health benefits against muscle/joint soreness and inflammation so I thought it would be good for us to try a total immersion. Richard, the owner, offered us a cool green drink while we watched his short video on how the tanks work before he led us into our own private rooms with shower and float pod. After a rinsing shower, I put on the provided hair net and ear plugs and climbed into the warm salty water and lowered the pod door. 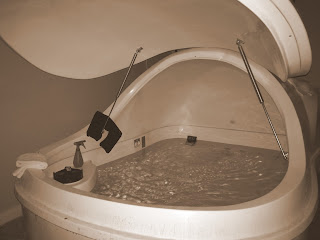 Like the conditions of the Dead Sea in Israel, the 1,000 pounds of magnesium salt in the 10 inches of water made me very buoyant and also created a slick oil-like texture to my skin if I touched it with my hands. I am 6'2" but I could float without touching the walls on either side unless I drifted into them. I had been worried that I would get bored lying in the darkness for an hour, but time really flies as you float weightless with soothing music piped through the water. Occasionally, I would place my hands behind my head and it provided the sensation of floating vertically in space. In contrast, if I let my head sink further back into the water it felt like I was floating upside down. It was very relaxing after the intense exercise of catching a full trapeze class. I did accidentally get a drip of salt water in one eye. It stung but I was able to use the provided spray bottle in the pod to rinse it out.
Posted by Noah Unsworth at 8:30 PM