Sunday night we went to iFly, the new Indoor Skydiving facility in San Diego for Dave's 70th Birthday. He had missed out when the rest of us went to the wind tunnel in Perris in 2012 for Kenny's Birthday so he was eager to try it. iFly was more expensive than the earlier place ($149 for four minutes versus $110) but the wind tunnel technology has been refined. The circular tube here was 360 degrees of glass instead of just narrow windows set within a metal frame and the wind turbines were much quieter. You couldn't even hear them from outside the building. 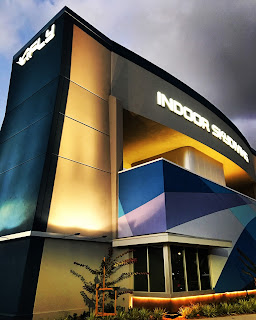 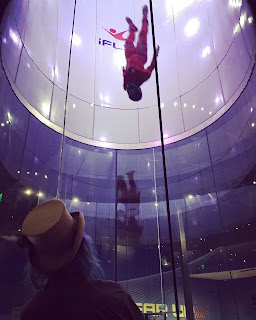 Since there was a large group of us, we were split into the 6 and 6:30pm time slots with Kenny flying in both. Dave did well his first time, spending two minutes at a time in the tunnel but he thought it was a bit too long and he would have preferred one minute segments at a time like the rest of us. I think they kept the wind speed lower here for newbies. In Perris, I went six feet over the instructors head at least once but here they they would pull on your waist if you started to fly too high. They made up for it by offering the High Flight where the Instructor would takes us up for a spin at the end. It reminded me of when my father would twirl me by my arm and leg as a kid. It was fun, but a little dizzying. 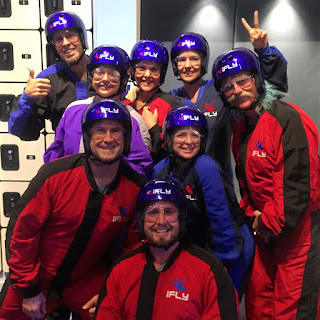 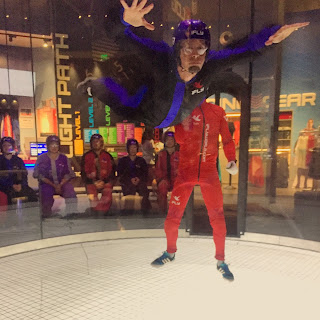 Darin, Tommy and Kenny flew in the 6:30 session with a little girl who could not have been more than 5 years old. She was so tiny. She was too floppy to hold the correct flying position so the instructor held her by the waist the entire time. Everybody gave her a high five when she left the tunnel but she didn't go back in. Darin and Tommy did well while Kenny worked on some more advanced skills with his fifteen minutes of time. The video below shows Kenny getting instruction from his coach. 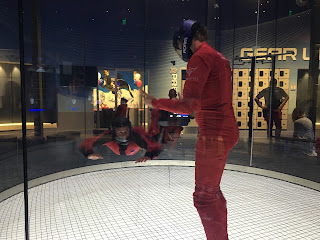 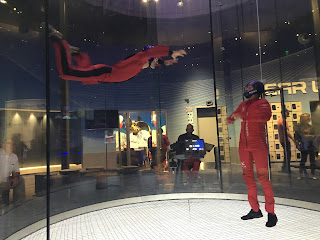 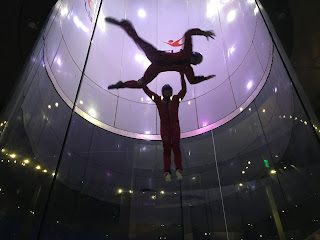 After each group finished their time, the instructor would show off his flying skills in the wind tunnel. I was most impressed with the first guy we saw in the tunnel who nose-dived from the top of the tunnel, stopping rapidly only a couple feet from the bottom at the very last second. Our instructor, Tom, was more cautious and gave himself at least a six foot cushion, but he had a funny move where he spread-eagled up against the glass and slid out of sight on his ass. The video below is of the demo from our group's 6:30 session.

Afterwards, we went to Sammy's Wood-Fired Pizza for diner. The Wok Fired Sliced Steak with a soy-ginger sauce was pretty delicious and we all shared the Messy Sundae they gave to Dave.

Link to my 2012 Perris Indoor Skydiving Post
Posted by Noah Unsworth at 7:30 PM