Last night, I finally used all my OpenTable reward points and splurged on a wonderful dinner with my wife at the Addison located in the Grand Del Mar resort.  (It ended up covering about 20% of the tab.) The French Restaurant received their first Michelin star this year, the only one awarded in San Diego.

Michelin Review - Among other luxuries, an evening at the Addison is like wrapping yourself in culinary excellence. A lengthy drive through the exquisite grounds of the Fairmont Grand Del Mar resort sets the scene. Inside this much-celebrated space, arched ceilings stretch overhead, while a roaring fireplace sends light dancing off the marble. Glossy windows overlook the golf course greens, and guests settle in for one of San Diego's most coveted meals. Critically acclaimed Chef William Bradley spins out one long dinner every evening, which is brought to you at the hands of gracious, polished and effortless servers. His French-influenced compositions are downright gorgeous, brightened up with a touch of southern California sparkle—and every resulting morsel is nothing short of revelatory.

Except for L'atelier De Joël Robuchon in Las Vegas, this is only my second meal at a Michelin-starred restaurant. Addison has also received 5 Stars from Forbes and 5 Diamonds from AAA. After dropping my vehicle off with the valet, we were seated by the window overlooking the golf course in the half rotunda. Since it was a week night and had to work in the morning, we only ordered one glass of wine each. Tori had the Pinot Noir and I ordered the Cabernet / Merlot Blend. Even though we decided to order the five course option instead of the Chef's Ten-Course Tasting Menu, we were more than full by the end of our 3 hour stay. 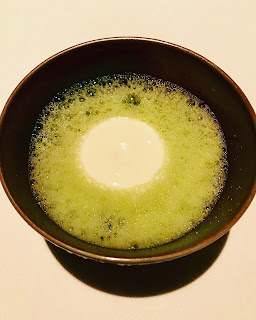 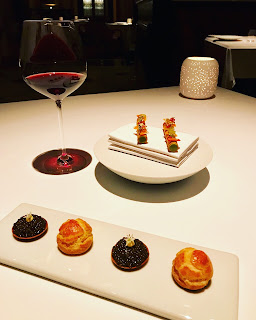 Petites Saveurs (Canapés) - Queen Beluga Caviar Bites with Cheese Gougères, tiny biscuits filled with a liquid bacon. This was my first time having caviar and it was delicious! Tori has eaten caviar before and she thought this was way better. Our favorite was the local inspired canapé that resembled a tiny gourmet taquito, filled with an avocado puree and topped with pickled peppers, onions and carrots. 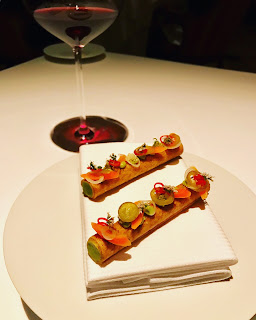 1st Course - Alaskan King Crab (Coconut, Thai Basil and Passion Fruit) served with Prawn Crackers. While I have seen this type of crab caught on "Deadliest Catch" many times, I have never tried this delicacy from the Bering Sea before and I enjoyed every bite. 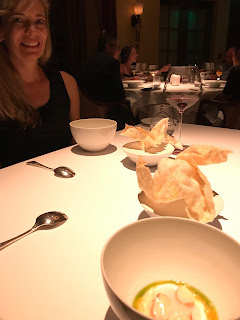 2nd Course - Artichoke Au Gratin (Whipped Parmesan, Potato, Thyme) was a perfect dish! Like they did all night, the servers set down our plates and poured the whipped Parmesan around the artichokes in perfect unison. It was just the two of us at our table but it was impressive to watch the swarm of servers descend upon the bigger groups. 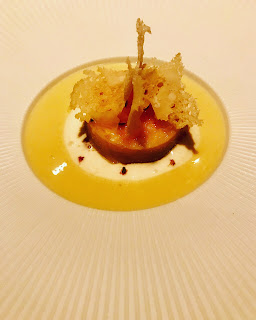 Intermezzo Snack - Curling Potato Chips and Rosemary Dip. These were simple but fun!!! 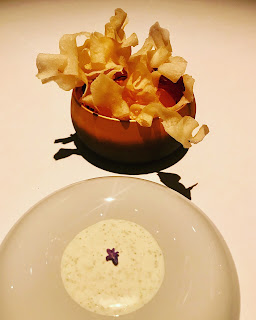 3rd Course - Wild Arctic Char (Roe, Chanterelles, Sauce Vin Jaune).  Tori's special request before the meal was no red meat, but it wouldn't have changed anything since our five regular courses contained only fish and poultry anyway. 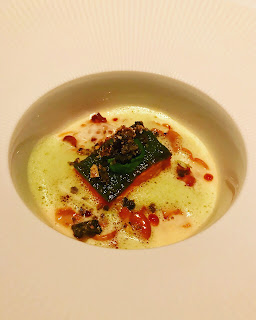 Before our 4th course, we were presented with delicious Parkerhouse Rolls served with Fleur de sel Butter, Honey Butter and a Tarragon Herb Butter. To save room, Tori skipped her 4th roll which I happily ate for her. 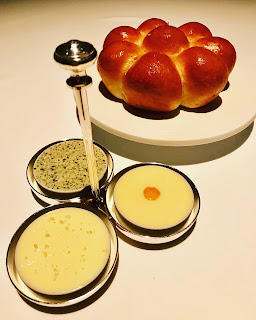 4th Course - Barbecued Squab (Red Cabbage, Beetroot, Blackberry, Mustard, Liver Mousse). I almost broke down and paid $80 extra for the Wagyu Beef instead, but I am glad I tried squab (or pigeon) for the first time. It reminded me a bit of the pheasant I ate at Maude in Beverly Hills. I enjoyed pairing the squab with the different flavorful items on the plate. 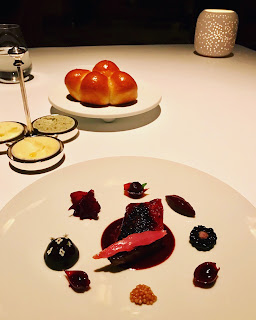 We skipped the Cheese Course because we were almost full but I did order the Tea Service. To avoid caffeine so late in the evening, I had Peppermint instead of Black Tea. 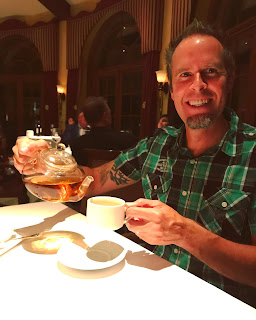 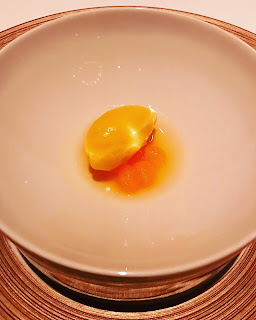 5th Course - Variations of Praline, Chocolate and Coffee (Caramelized Banana / Meringue). Tori enjoyed it but the coffee flavor was too strong for me. 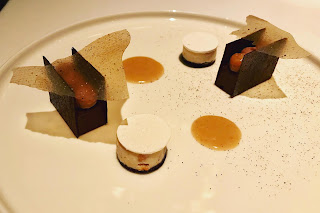 Gormandises - The desserts kept coming with a small selection of Petit Fours, Cherry Truffles and Cognac Caramels. They were all great but the smooth caramels were my favorite. 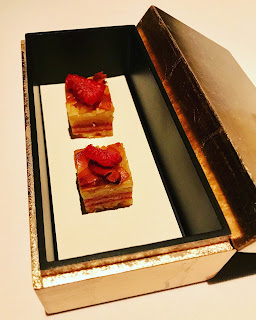 It was an awesome meal and as we were escorted out, we were presented with the printed menu of all the dishes and gift boxes filled with Pistachio Toffees that we ate over the next three nights for dessert. 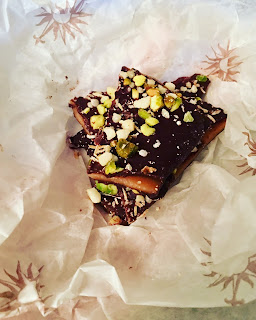