My brother, Joel, is a helicopter pilot and instructor at Civic Helicopters located at Palomar Airport, the busiest one-runway airport in the United States. He got his license last year and yesterday was my opportunity to go on a flight with him. I was a little worried that we wouldn't be able to fly because of the heightened security at US airports because of the arrests the night before in England of the terrorist plotters who wanted to blow up airliners with liquid explosives. It turned out to be no problem at this small domestic-only airport. 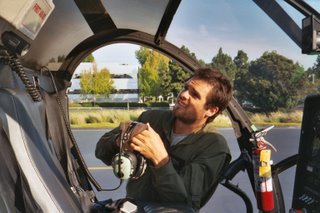 Joel took me up in the two seater helicopter that they called, 88 Spanky, the Love Machine. It is his favorite helicopter at work and was the one he flew to cover the Los Angeles and San Diego Marathons. It is a strange feeling taking off in a helicopter. You don't get that rush of speed you have in an airplane before takeoff, instead one moment you are sitting on the ground and the next you are going straight up. It feels like you are being lifted off the ground by a crane or something. 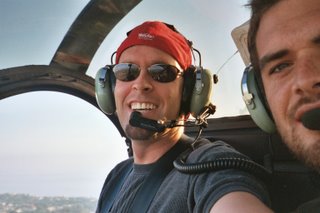 It was a beautiful day with hardly any clouds as we took off around 6:15pm. Within minutes, we were out over Baquitos Lagoon and heading for Leucadia. There was no doors on the helicopter so we enjoyed a nice cool breeze while watching the cars fight it out on the crowded freeway below. My head was on a swivel as I tried to take the whole view in at once. The ground seems so flat from the air, making it is harder to pick out landmarks I am so used to seeing everyday. 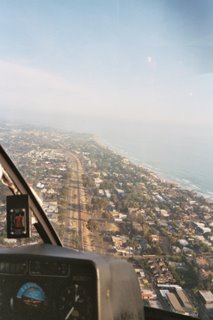 We flew over my house and out over Beacons Beach. The ocean was so clear below us and a few surfers gave us a wave as we flew overhead. We flew along at about 200 feet, the same height as the cliff, as we followed the coastline down to Swami's before turning around to head back to Beacons and buzz the house again. In such a small helicopter with no doors and a clear bubble, the sensation of flying feels so much more real than if we were in a bigger craft with smaller windows. 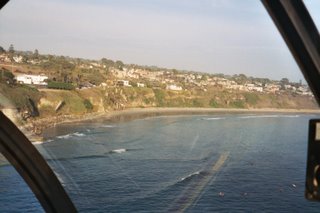 Leaving Encinitas, Joel let me fly for a while as we heading inland over Rancho Santa Fe toward Lake Hodges. At first, it was really tough because I kept overcompensating with the cyclic (stick that controls the rotors) but as soon as I concentrated on the horizon I started to get the hang of it. To fly forward and increase the speed I had to pull back on the stick until the front of the helicopter felt like it was about to go into a dive. 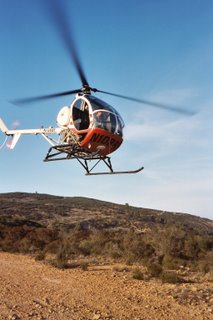 As we neared the high hills along the Del Dios Highway overlooking Lake Hodges, Joel took back the controls and headed in for a landing on one of the high ridges. We touched down at the end of a small dirt road at the edge of the ridge with a great view of the whole North Country area. I jumped out and Joel took off again to let me take a picture of the Helicopter in the air. For a brief moment, I thought he might play a practical joke and pretend to fly away and leave me stranded. 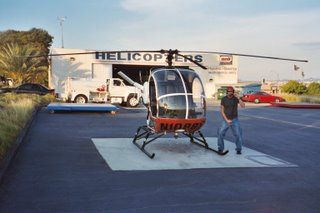 Flying back to the airport, Joel wanted to show me the runway and make a brief landing on it. Listening to him talk to the control tower in my headphones, I didn't even recognized his voice because he sounded so professional with all the flight jargon. The tower told us the airport was too busy at the moment so we just landed back at the helipad outside his hanger. I helped Joel and his boss wheel the helicopters back into the hanger before driving my car home on the boring roads. Heh!

Posted by Noah Unsworth at 7:34 PM