I had a fun weekend. I went to a party at Suzie's house Friday night, Medieval Times on Saturday, and a beach party at Tide Park in Solana Beach on Sunday. 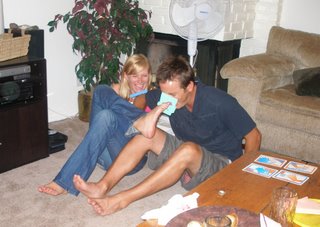 Suzie's party was really fun. We played a drinking game version of Jenga and a game I have never heard of before, Body Jam! To play, you draw two pairs of cards to determine which body parts you have to use to carry two foam pieces to the bucket across the room without dropping them. I teamed up with Sara against Tiffany & Dave and Suzie & Kurt. After a tie and a triple play-off with Tiffany and Dave, Sara and I emerged victorious as the Body Jam Champs. I think all the Jello Shots helped get everyone in the proper game mood. 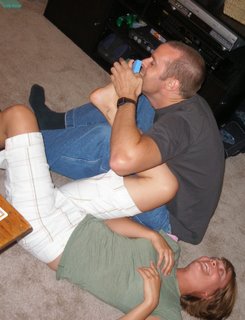 On Saturday, I went up to Orange County to celebrate my grandmother's birthday. The whole family went to Medieval Times where we were seated in the Blue Knight section. Our knight kicked ass in the games of skill, never missing a ring with his lance, but he was the first one to die in the one-on-one combat. Boooo! The food was quite good, even though you have to eat with your hands. This was my first time at Medieval Times, I have wanted to go ever since seeing it in the movie, The Cable Guy, with Jim Carrey. 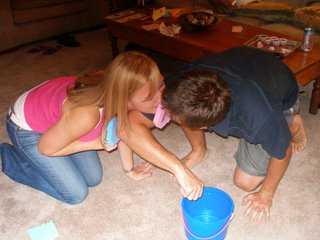 I had fun hanging out at Tide Park in Solana Beach on Sunday. There was no waves but I had a fun time at the party throwing the Frisbee and playing wiffle ball. Blayne hit a nice walk-off double to lead our team to the win. The trash talker in the outfield wasn't able to get a handle on the line drive directly at him.
Posted by Noah Unsworth at 8:53 PM