I have now been in Beijing, China for three days. The weather is hot, but not unbearable or as bad as I thought it would be. I had heard about the pollution before I got here, but I still wasn't prepared for the thick haze of smog that fills the city and turns the sun into a dull red disc in the sky. The city is huge and it is filled with countless large apartment buildings and broad avenues packed with cars. 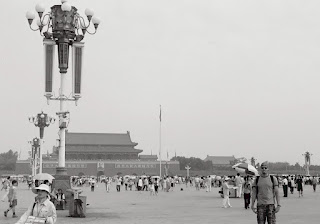 Monday, my first day, I just spent exploring by myself. The taxis are very cheap here and there are over 90,000 of them in the city, so they are easy to catch. I started on the main boulevard that bisects the city and visited several of the markets. I started at a high-end shopping center where the staff bow to you getting on and off the escalator and then I went to the Beijing Friendship Store where I bought some Green Tea. Over at Silk Street, I had a fun time bargaining for a couple shirts. The first girl, got a high price out of me, but with that experience I was able to get a much better deal later on with the second. 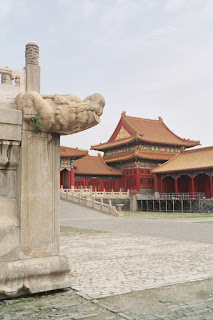 Today, we went to Tiananmen Square and the Forbidden City. The Square is huge and it is surrounded by gigantic buildings on all sides. The biggest building is Mao's Mausoleum at the center of the square. I wanted to see his preserved body inside, but it was closed as it is getting renovated for next years Olympics. We entered the Forbidden City which sits at the far end of the Square and has large portrait of Mao hanging over the entrance. We had a cool guide who told us all about the imperial city (I am going to have to see "The Last Emperor" when I get back) and took us to a great restaurant for lunch. Afterwards, we visited the Temple of Heaven which was built at what was considered the exact center of the universe for the Chinese. 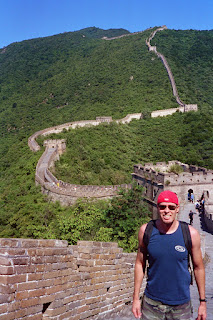 Yesterday was great. We were able to escape the pollution in Beijing and go out to the Great Wall of China. It is in the hills about 2 hours north of the city. It was nice to see blue sky again and while the sun was still hot, there was a cool breeze blowing over the walls. We hiked all the way up to Tower 20 which is at the highest point of the reconstructed wall that we are allowed to climb. The wall follows the ridge line of the hills so there are allot of steps and hiking up and down from tower to tower. The last section is the steepest, a brutally long staircase and the last 40 steps I had to use my hands to climb but the view was worth it. 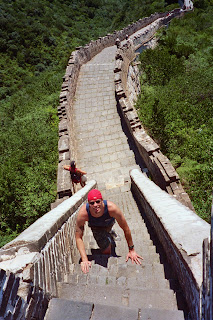 After the hike back along the Great Wall, Augusto and I rode a sledge down the hill. I sped pretty fast down the metal toboggan run with a hand brake to slow down if I got to close to the guy in front of me. Augusto forgot to slow down on the last turn and hit me pretty hard at the finish line. It didn't hurt but my legs went flying up into the air over my head. After resting up from the long hike we went to see the Chinese Acrobats (amazing!!!) and then to a really fancy restaurant for a Peking Duck Dinner. Lots of tanks filled with fish swimming around. 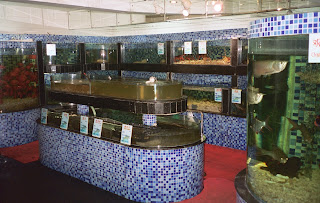 I was a little worried about if I would enjoy the food while I was here, but I am loving it. (Everything except the Peking Duck which I didn't dig.) They serve meals in restaurants potluck-style where we can order several different meat or vegetable dishes with rice to share. I am not much of a vegetable guy but I am really enjoying the broccoli served in some kind of butter sauce, the eggplant and the tofu cooked with an orange sauce I think. Some of the dishes are hard to explain. My favorite so far is the spicy chicken with peanut. 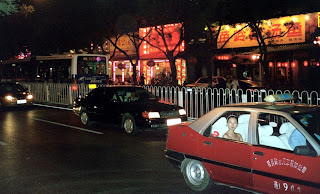 Tomorrow, I go cycling in the Hutongs, the older traditional neighborhoods in Beijing which show how the booming city used to look before it began modernizing so rapidly. In the late afternoon, we catch a 15 hour overnight train to the ancient Chinese capital, Xian, where the Terra Cotta Warriors were discovered. 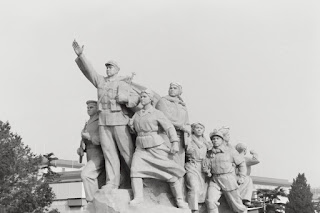 p.s. The city really comes alive at night. The sidewalks are crowded not just with pedestrians walking around but residents bringing out little chairs and low tables to play cards, Chinese chess and several other domino-looking games I couldn't recognize. It is a huge city, but feels very communal. In the morning, you can see people doing Tai Chi on the sidewalks. 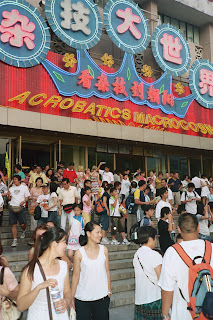 p.s.s. A lot of doorways here in Beijing have growling lion statues on either side of the entrance. I wonder what it means. 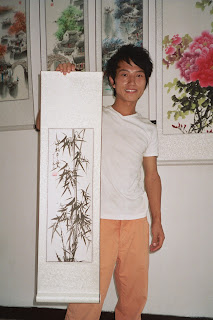 p.s.s.s I learned today that "Mei Guo" is the Chinese name for the United States which translates as "Beautiful Country". I haven't experienced any Anti-Americanism here in China (everyone is very friendly) and I have been surprised to see several men walking around the city wearing U.S. Army jackets. Strange considering how most of the world is pissed with America about Iraq.
Posted by Noah Unsworth at 4:15 AM