I arrived home from China today. I am really tired from being awake for over 30 hours but I am still on a high from the trip. 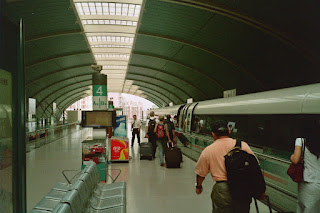 I woke up early on Friday morning to take the MagLev Train to Shanghai's Pudong Airport. The ride was very smooth and I loved how the whole train would sharply bank as it made it's turns. The trip took only 7 minutes 20 seconds to travel the 20 miles, reaching a top speed of 268 mph which makes it the fastest train in the world. The cool part is that every car has the time and the current speed of the train displayed, so I could tell how fast we were traveling. I nearly jumped out of my skin when the MagLev Train going the opposite direction blurred past my window with a loud roar. My camera finally died on me after taking a couple pictures of the train standing in the station. Bummer! I would have loved to get some shots of the landscape flying by. 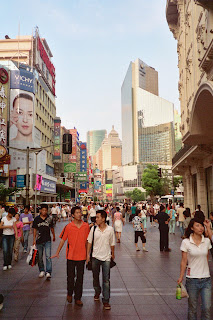 I had a good final two days in Shanghai. On Wednesday, we experienced a heavy thunderstorm in the morning but we took advantage of the bad weather to visit the Shanghai Museum. My favorite exhibit was the chronological history of porcelain "China" which this country invented and is so famous for. It was interesting to see the advances as the porcelain ceramics got thinner, more colorful and more intricately designed over the past 2000 years. The exhibit of ancient Chinese paintings was also fascinating. I really enjoyed the fine detail in the landscapes and paintings of trees, flowers and birds. They kept the painting exhibit hall very dimly lit, but motion sensors would light up each individual painting as you approached them. It was pretty cool. 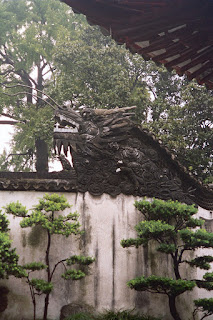 When the rain died, we went to the Yu Yuan Gardens, the former private garden estate of a provincial governor in the 16th century. The landscaped vegetation was in a maze of walls, rock formations, fish ponds and old buildings. The early rain kept away the normally large crowds and gave the intricately designed cobbled paths a clean sheen. After going for a walk through a Hutong area of Shanghai after lunch, we decided to relax and go to the movies. We ended up seeing the new Harry Potter movie in 3D at an IMAX theater. (It was in English with Chinese subtitles.) It was my first time seeing a 3D movie. It was very impressive during the magical showdown with Lord Voldemort. 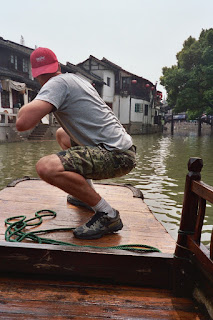 Our last day, we went to the village of Zhujiajiao, the Venice of Shanghai. The white buildings with their black roofs and all the distinctive stone bridges spanning the canals were built during the last two Chinese dynasties. We went to a nice restaurant called "1121" in the French Concession section of the city for our final dinner together in China. I liked the way they served the tea. The waiter sent a foot long stream of hot water swirling into our cups from a tea pot with a long narrow spout. He had very good aim. The Lemon Chicken was delicious. 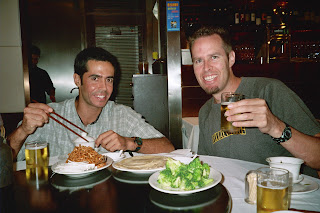 p.s. It is really hard to window shop in China, they are the masters of the high pressure sales technique. You have to keep up a fast pace and not let your gaze linger too long on any item if you don't want to get cornered. 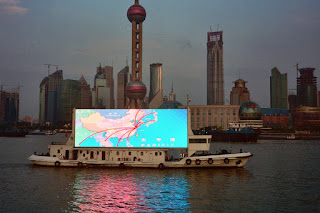 p.s.s. On my way home to Leucadia from LAX Airport, I saw an V-22 Osprey tiltrotor aircraft hovering low over the I-5 freeway in Camp Pendleton. It is one of the Marines' new planes that can turn it's propellers up to fly like a helicopter. It looked pretty cool.
Posted by Noah Unsworth at 9:28 PM