Well, I ate a scorpion. With the stinger still attached!! 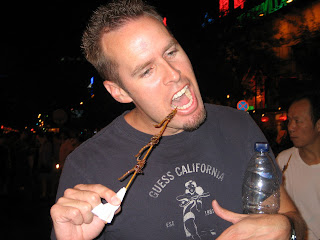 I bought a skewer with three scorpions on it at an outdoor market in Beijing. There were about 100 stalls lined down the street with every kind of exotic food or animal part displayed. 99% of the customers were Chinese people and the rest were foreigners looking but not really buying. A few of the stalls had insects like scorpions, silkworms, grasshoppers and what looked like cockroaches. 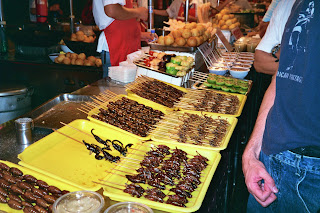 I thought I was only going to buy the scorpions so I could pretend to eat it for a photo, but I was dared by the group and encouraged by the Chinese people around me who were taking pictures and watching to see if I would like it. After a few moments of staring at it, I finally bit down on it. It actually tasted just like popcorn cooked in oil. It was crunchy, but surprisingly good and it went down easy. 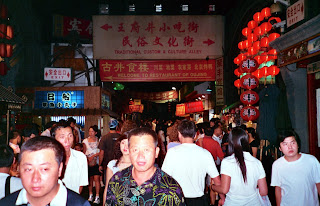 I am traveling with a small group of four people, Kristin and Kathleen from Chicago, Suzanne from Toronto and myself. Our tour guide, Augusto, is from Peru. He has only been in China a little while and doesn't speak the language, but he is very good. He knows all the best places to eat and fun things to do. After my scorpion episode, we met up with another guide who is friend of Augusto's, Sam from Belgium. He is in Beijing running tours up into Tibet and then over to the Base Camp at Everest. He took us to an ex-pat bar in the city called "The Poachers" that is hidden away down several alleys. The beer was cheap and we had a good time. 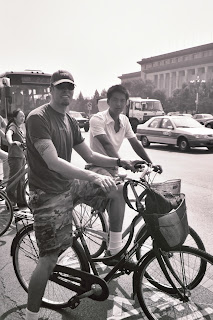 My bicycle ride through Beijing and into the Hutongs where a quarter of the city's population lives the next morning was great. It was a fun way to see the city. The sky was a little clearer and riding kept us cool. I am glad that I tried riding after waiting for a few days and observing how the local bike riders handled riding in this chaotic but fluid traffic. The trick is to ignore the cars and they will avoid you. (Except the buses!) The hardest part was avoiding the pedestrians who ignore the bicyclists. 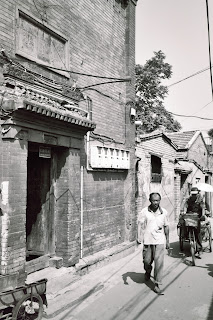 The interesting part of the bike tour was the transition from biking down modern busy avenues and turning into narrow alleys and feeling like I was stepping back 100 years. The alleys in the Hutongs are very narrow and the homes are handed down from generation to generation. The people who live there have to deal with very primitive conditions (including having to use the public toilets because they have no bathrooms) but they don't want to move to cheaper apartment buildings with more amenities because their homes in the Hutongs are more valuable. Around every corner there was a little old lady wearing a red arm band. They are the lowest rung of government officials, acting as a sort of neighborhood watch against thieves and the person who neighbors can report their problems too. 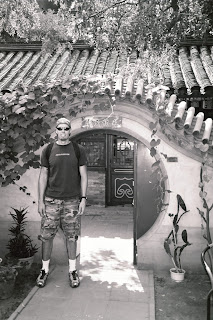 We decided to go visit the athletic facilities being built for the Summer Olympics next year. The main Olympic Park was a dirty construction site but it contains the nearly complete Olympic Stadium which looks like a giant steel bird's nest. It was pretty impressive. We could see workers walking all over the top. The swimming facility next to it looks like a collection of blue plastic bubbles in the shape of a square. A giant seven-star hotel complex rising up along side the park will give great views but I doubt anyone but VIPs and millionaires will be staying there during the Games. It is a great contrast with the flimsy-looking barracks filled with bunk beds for the workers built all over the construction site. 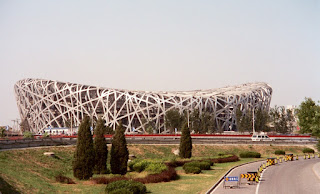 Thursday night we took a night train to Xian. The train station was very busy, but we had a nice sleeper car. We arrived in the morning and visited the Bell and Drum Towers. Xian is the former capital of ancient China and was the starting point for the Silk Road. We wandered down the narrow streets of the Muslim Quarter and had a great lunch of lamb and beef skewers with some kind of fried flat bread. The spices they used were excellent. We visited the Great Mosque in the Quarter which was busy because of the faithful coming for pray on Friday. We also went for a bike ride around Xian on top of the old city walls that encircle it. 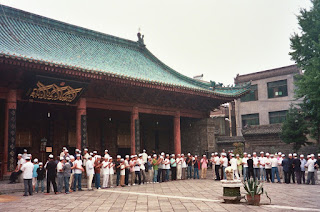 Last night after a delicious dumpling dinner, we went to the Giant Goose Pagoda where they have a light & water show every summer night in the square. The fountains are bigger than three football fields and the place was packed. Augusto and I took our swimsuits and we ran around in the fountains with everybody else during the show getting soaked. There is a group of officers marching around the fountains that Augusto calls the "Water Police" who make sure everyone is following the rules. It is something to get reprimanded for standing on top of a bench by a stern female officer who looks like a supermodel in a hot pink uniform with a skirt and high heeled boots. The male officers wore what looked like white sailor uniforms. 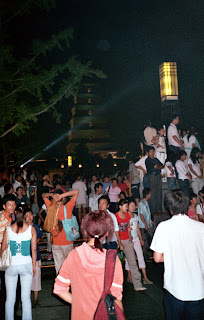 Today we went to see the Terracotta Warriors on the outskirts of town. We learned that the Terracotta Warriors were buried outside the tomb of the first Chinese Emperor who united the seven kingdoms into the country of China. He was also the Emperor who started building the Great Wall. His actual tomb is still buried and untouched because of the poisonous levels of mercury in the ground around it. The Warriors were impressive and the farmer who discovered them in the 70's was there signing books. On the drive back to town we ate some white pomegranates that the driver picked fresh for us from the surrounding groves. Very Sweet. Our guide opened them up with a gigantic "Crocodile Dundee" knife she pulled out of the glove compartment. 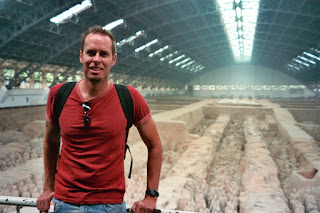 Before coming to the Internet cafe tonight, I went to get a massage at a place called "Big Feet Ancestor" that Augusto recommended. It was a really nice place. After all the walking around, the foot massage was great. The Internet cafes here are harder to find than in Europe but they are very cheap. Only 3 yuan (40 cents) an hour and I didn't notice much effect from the "Great Firewall of China" except that I couldn't access Google News and international sites loaded slower. I can now recognize a Chinese character, a box with two X's in it means the Internet. 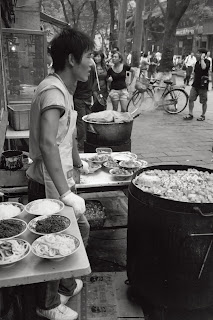 Tomorrow we fly to Guilin in the south of the country. It is considered to be the most beautiful area of China. 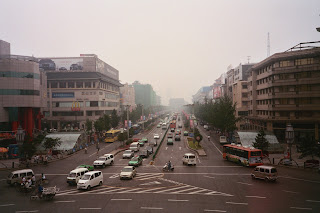 p.s. I sometimes forget that this is a communist country because it is so capitalistic here. There is the occasional reminder when we are told not to photograph on certain government streets or the police in the green uniforms. 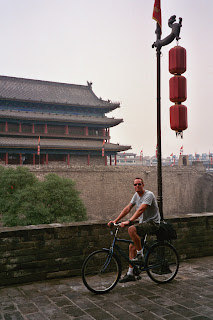 p.s.s. I am digging Chinese TV commercials & music videos on the "V" channel. Love songs seem to be the popular choice right now. I have a music video by a Jacky Cheung stuck in my head now. There are allot of commercials telling the residents of the Beijing not to spit on the ground and espousing the virtues of being friendly. 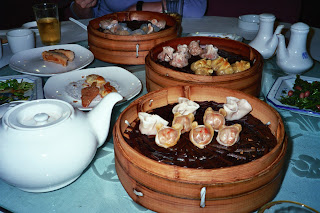 p.s.s.s. I had the best pork dumpling at a little shop on our bike tour. A new favorite dish is the candied potato wedges. Tastes better than it sounds.
Posted by Noah Unsworth at 8:26 AM