I flew into Shanghai this afternoon after spending two days in beautiful Guilin. Yesterday, we took a four hour boat ride down the Li River between Guilin and Yangshuo. The area is famous for it's thousands of limestone karsts. They are the steep, tree-covered pinnacles that are seen so often in paintings and films of the Chinese countryside. 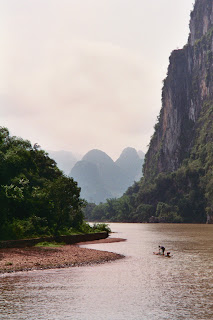 The Li River was very beautiful. It was surrounded on both sides by the karsts that jut up to 1,000 feet high and the river was filled with water buffalo and fisherman on their narrow bamboo rafts. I could see the cormorants (the water birds they train to catch fish) perched on the boats waiting to be taken out by the fishermen at sundown. The birds wear metal rings on their throats so they don't swallow the fish. 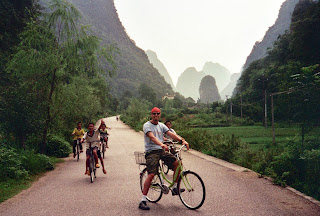 The highlight of my trip so far is the bike ride once we reached Yangshuo. Within ten minutes of riding, we were out peddling through small villages and rice paddies as the sun set over the limestone peaks. (I took some great pictures.) We got caught in a hard pouring thunderstorm near the end of the ride back. We watched the lightening under an awning until the rain died down enough to venture back outside. 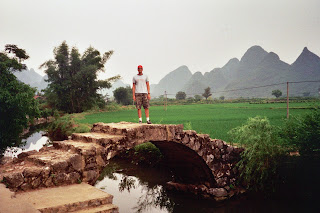 After dinner, we went to a light, dance and music show called "Impressions" that uses the natural environment as it's stage. The show had a cast of at least 500 with singers and boatman going back and forth across the river with the karsts brilliantly lit up in the background by intense spotlights. As we watched it, we commented on how much it look liked the type of cultural performance seen at the Opening and Closing Ceremonies of an Olympic Games. It turns out, the show was created by the Chinese director of "Hero" and "Raise The Red Lantern" who is also doing the Opening Ceremonies for the 2008 Beijing Olympics. 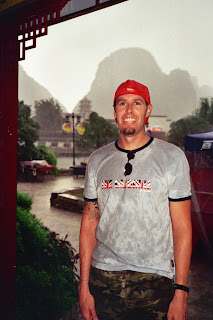 My first day in Guilin, I went to one of the caves that are inside the karsts. The Reed Flute Cave was big and all lit up inside to show off all the the strange formations. It was fascinating but I prefer my caves a little dark and spooky. It was nice and cool inside though compared to the blazing heat outside. We ended the day by going to a cooking school in Yangshuo. We started off at the local farmer's market where they had all the fresh vegetables, spices and live animals and fish available. (We bought the fish we were going to cook for dinner out of a little pool.) There was a couple of skinned DOGS hanging from hooks but I didn't see any live dogs in cages. I don't think I could of handled that. We cooked our meals out on a farm and they turned out great. We had a local teacher from the area. 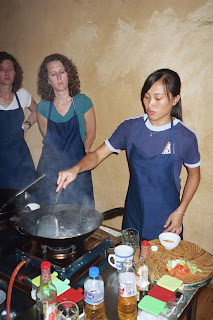 Today, we walked around Shanghai for a bit along the Huangpu River and then went to a fancy dinner at the top of the Jin Mao Tower. It is the 4th highest building in the world. It had great views of the city and is right next to the almost completed skyscraper that is in a race with the one in Dubai to be the next tallest. The bar at the center of the 55th floor was amazing. The ceiling goes all the way up the interior of the final 30+ floors to the top of the tower. It is dizzying to look at for too long. 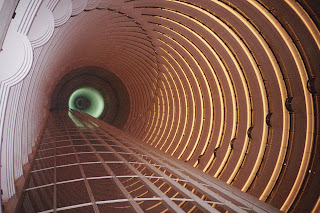 I have two more days here in Shanghai. The traffic seems to be much worse here, but the sky is much cleaner than Beijing. I can really feel the European touch in the city's architecture compared to the other Chinese cities I have visited. I am going to take the recently built MagLev Train from the city out to the airport on Friday. It uses magnetic levitation to hover over the train track and it supposed to be super fast. 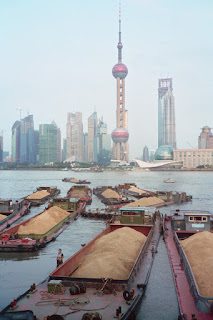 p.s. There was a festival to celebrate the ancestors while we were in Yahgshuo. All the families were buying live chickens at the market that they cook to celebrate and we could hear the loud firecrackers they were setting off all night. 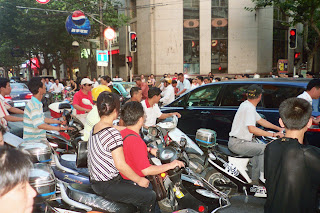 p.s.s. Our bus driver on the way back to Guilin on our first night seemed especially suicidal. There wasn't a corner too blind for him to attempt to pass slower vehicles. 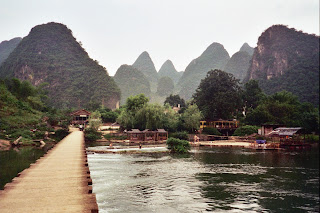 p.s.s.s We had a good laugh when we drove by a bank in the morning. All the tellers were exercising in the lobby before they opened. They were shaking their butts at the glass as we went past on the street in Guilin. I think they would have a hard time convincing us lazy-assed Americans to exercise at work in the morning.
Posted by Noah Unsworth at 9:30 AM